5 Delicious Foods To Try On The Cajun Bayou Food Trail

Southeastern Louisiana is in a class all by itself when it comes to authentic food. Firmly rooted in Acadian culture and tradition, the flavors of Cajun cuisine are on full display. Louisiana’s Cajun Bayou in Lafourche Parish created the Cajun Bayou Food Trail as a fun way for people to try all the best restaurants in the area.

We traveled up and down the bayou and found plenty of mouthwatering food. This is spectacular regional cuisine that you just can’t get anywhere else. To be listed on the Cajun Food Trail, a restaurant must meet certain criteria, including being located in Lafourche Parish and serving locally inspired Cajun cuisine or seafood.

A few important foodie things we learned on the bayou. Boudin is a specialty sausage and is pronounced boo-dan. You have to say it fast! Many recipes start with a roux and most involve the trinity: onion, celery, and bell pepper. Last but not least: Gumbo with potato salad is a thing. Who knew? Here are my 5 favorite stops on the Cajun Food Trail.

I was hosted by LA Cajun Bayou. All opinions are my own.

When something works, you don’t change it. That seems to be the philosophy at Bourgeois Meat Market in Thibodaux. They’re doing things pretty much the way they’ve done them since back in 1891, when current owner Beau Bourgeois’s great-grandfather started what has evolved into the market. Thanks to refrigeration, going door to door to sell the freshly slaughtered cow or pig isn’t required like it was way back in the day, but not a whole lot else has changed around here.

One of their “newer” products, Cajun beef jerky, was first introduced in the 1980s and continues to be a best-seller today. What sets this meat market apart, along with its longevity, is the product offerings. In addition to the typical fresh meats like steaks, roasts, ribs, and chops, you’ll find traditional south Louisiana specialties like andouille, a variety of boudin, cracklins, tasso, hog’s head cheese, turkey cheese, and oxtails for your mock turtle soup.

Bourgeois is one of the very few places that still make boudin rouge. After extensive work with the health inspectors, their way of preparing this delicacy was approved. The magic happens out back. Two smokers are set up: one for the sausage and andouille, the other for beef jerky. According to Beau, someone’s tending the fire all day during the busy season. While we were there on a weekday morning, the shop was bustling with a constant stream of customers. The butchers were extra busy because it was deer season.

While everything I tried here was excellent, what won me over are the boudin sausage burritos. Stuffed full of rice, cooked pork, onion, and bell pepper mixture, these piping hot burritos are unique and totally unexpected from a meat market menu. Of course, I couldn’t leave without taking home some packages of their famous jerky. This wonderfully flavorful jerky will make perfect stocking stuffers for my guys at home.

Chef Logan Boudreaux of Cinclare Southern Bistro in downtown Thibodaux is bringing his “A” game to the table. On a recent weekday night, we arrived at a packed house. Thank goodness we had reservations as the word is out about Cinclare.

Downtown Thibodaux is going through a revival. With lots of construction going on in neighboring storefronts, it seems everyone wants in on the action downtown. Cinclare is a place rehabbers can look to for inspiration. The gorgeous space is completely updated but retains all of its charm from yesteryear. The bar space is warm and cozy with the pendant lighting over the bar adding just the perfect soft light.

I confess I always thought cheesecake was a dessert. No longer. The savory alligator and andouille cheesecake at Cinclare is simply irresistible. It’s indeed a cheesecake, only served hot and savory with cheesy goodness, alligator, and andouille throughout. This addictive concoction would make the top 10 list of appetizers anywhere.

My dinner companions and I voted this one of the top items we tasted on our travels through southern Louisiana and New Orleans — and we ate a lot! Currently, it’s only available on Wednesdays, although you can order rangoons that are stuffed with the cheesecake filling for a similar flavor.

Down the bayou in Lockport is Kajun Twist & Grill, home to authentic Cajun specialties made under the direction of chef-owner Anthony Goldsmith. A hub of tiny Lockport, photos by a local artist line the walls of the cozy restaurant and patrons can purchase one right off the wall to support local art. The bar brings in locals with its nightly drink specials.

Anthony has an interesting background — one that includes multiple degrees from LSU and surprisingly no formal cooking education. So how does he pull off creating delicious traditional fare like gumbo, fricassee, and etouffee? Anthony’s goal is to continue the family tradition of preparing meals in the “true Cajun Bayou cooking” fashion. One look at his family tree and it’s apparent that Cajun cooking is in his genes. His great-grandmother, Alzina Toups, was well-known for her legendary Cajun cooking.

Other family members are established chefs, and fine-dining restaurants have been in the family since Anthony’s childhood. He opened his first restaurant, Kajun Twist, in Galliano 8 years ago. After severe damage from Hurricane Ivan, it’s going strong today as a food truck and is also a stop on the Cajun Bayou Food Trail. Anthony’s dedicated to his craft. He’s the kind of chef that will drag everything he needs hundreds of miles to the middle of nowhere in Big Bend National Park to make a crawfish etouffee.

At Kajun Twist, you can enjoy traditional Cajun fare and more. The rich gumbo served with rice on the side is a winner. So are the thin-sliced onion rings served with a kicky dipping sauce. The demand is so high for the rings that the restaurant has been known to go through 500 pounds of onions a week. The daily lunch specials are wildly popular and feature things that will remind you of Sunday dinners at home: roasted chicken with dirty rice and green beans, meatloaf and mashed potatoes, and red beans and fried shrimp.

It really is about family here. On our visit, we were lucky enough to meet Anthony’s grandfather, Anthony Toups, another chef in the family. His newest venture, Cheniere, will be opening soon at the Carmel Inn in Thibodaux. On our way out, Anthony told us his go-to dish is black-eyed peas jambalaya using his great-grandmother’s recipe. I can’t wait to make it.

Pro Tip: If you want to try your hand at real Cajun cooking, find some of Alzina Toups’ famous recipes here.

Fremin’s is housed in one of the town’s most historic buildings in downtown Thibodaux, the former Roth Drugstore. After a multi-year restoration, this gem is now an amazing mix of warm mahogany and brick walls highlighted by the original tin ceiling. At Fremin’s, you’ll enjoy fine dining in a relaxed atmosphere. From our table we could see into the open kitchen, giving us a glimpse of the chefs as they prepared their creations.

I ordered the red fish special, a tasty fish served with warm, caramelized onion, bacon, and mashed sweet potatoes. My dining companion chose the seafood Napoleon. This elaborate mixture of fried eggplant, sauteed shrimp, crab meat, cream, and housemade tomato sauce was the star of the show. While I didn’t have room for everything I wanted to try, next time I’ll order the duck and andouille gumbo — something tells me it has to be amazing.

Pro Tip: Make sure to start with an irresistible sugarplum martini.

Oh, what fun we had at Spahr’s Downtown. This local diner in downtown Thibodaux delivers tasty food served in a casual atmosphere. Known for their Bloody Marys, they offer Sunday brunch as well as breakfast, lunch, and dinner. Spahr’s Downtown is one of three Spahr’s locations in the area. With other locations down the bayou in Galliano and Des Allemands, you won’t have to travel far to dig into traditional Cajun and Creole specialties.

As we sat at a table adjacent to the bar checking out the menu for after-dinner desserts, we struck up a conversation with some locals and were soon in the middle of the great Louisiana debate: Gumbo with potato salad or without? Everyone we talked to was in the “gumbo with potato salad” camp. As much as we wanted to continue that conversation, this night was about dessert.

In South Louisiana, bread pudding is a loved, centuries-old dessert. There are a zillion ways to make bread pudding, and of course, there’s a debate about which is best. The homemade bread pudding at Spahr’s was served warm with the French bread covered in a sweet rum sauce and sprinkled with raisins.

This is some of the best bread pudding we had on our travels through South Louisiana, but you can’t go wrong with any of the desserts at Spahr’s. The peanut butter pie is so popular it was sold out the day we visited. We did have the praline cheesecake and tiramisu along with our bread pudding. All are fabulous. 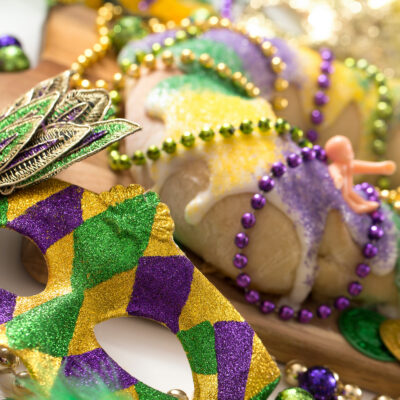 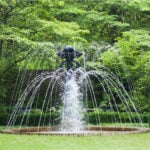 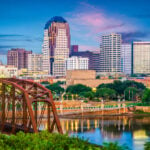 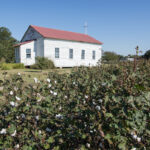