9 Amazing Things To Do In Seattle When It’s Raining

It should come as no surprise to visitors that a rainy day or two comes with the territory that is Seattle. After all, the vividly green landscape that earned Washington State’s largest city the nickname The Emerald City didn’t originate out of nowhere. There was some rain involved.

Especially in the late fall and winter, rain is a pretty good bet. During November, December, and January, Seattle averages 14 days of rain a month, and February and March come in at 12 and 13 average days of rain.

Once I arrived in Seattle, I was thrilled to realize that the rain seemed to intensify the entertainment at many of Seattle’s attractions – from the spectacular Glasshouse at Chihuly Garden and Glass to the city’s iconic coffee shop scene.

Here are 9 amazing things to do in Seattle when it’s raining:

Several of my tours were hosted by Visit Seattle and Seattle CityPASS, but my opinions are my own.

Pike Place Market, downtown Seattle’s wildly popular marketplace, offers not only a dizzying array of chocolates, fruits, seafood, and flowers, but it is also wonderfully rain-proof. Most of the market is enclosed and the outside portions tend to be protected by awnings and overhangs.

I’ve always loved wandering through Pike Place, watching the entertaining antics of the fish sellers, sampling the chocolate-covered cherries, and browsing the gift shops with their beautiful fresh and dried flowers, vintage books, and unique purses and scarves. Rainy weather can bring in larger-than-usual crowds, but it all adds to the market’s bustling atmosphere.

For a taste of Seattle’s classic clam chowder, the award-winning Pike Place Chowder is the go-to spot. To avoid some of the crowds at the Pike Place Market location, head just a few blocks northeast to the Pacific Place Center location.

Among Seattle’s many claims to fame is its celebrated coffee culture. The international Starbucks chain got its start in a spot at Pike Place. Now, independent coffee shops are located on street corners all over the city.

For a special and unique coffee experience, visitors should not miss the Starbucks Reserve Seattle Roastery in the Capitol Hill neighborhood. Described as “an immersive and dramatic expression of our passion for coffee,” the Roastery offers a large variety of coffees, pastries, and cocktails. It is also a beautifully designed space that gives customers a fascinating look at the roasting process.

Glass artist Dale Chihuly got his start in nearby Tacoma, and Seattle’s Chihuly Garden and Glass perfectly showcases the work of the world-famous Washington artist.

The entire area is a perfect place to go on a rainy day, but I especially love the gorgeous Glasshouse, the garden’s 40-foot-tall centerpiece that covers 4,500 square feet and features massive windows offering glimpses of the neighboring Space Needle. The Glasshouse Sculpture never fails to take my breath away with its palette of reds, oranges, yellows, and amber. Splashes of rain on the arched windows only heighten the colors.

Pro Tip: Seattle embraces its rainy climate, and for a playful tie-in, check out Staypineapple’s colorful Maxwell Hotel — located just steps from the Seattle Center and Chihuly Garden and Glass — for its “Kissing in the Rain” package.

From Jimi Hendrix to Nirvana and fantasy movies to sci-fi, the Museum of Pop Culture (or MoPOP) has the pop culture scene covered.

The sprawling, multi-faceted museum features about a dozen incredibly detailed and hands-on exhibits, some interactive, that touch on a variety of musical genres, from rock to punk to hip-hop. The exhibits — like Worlds of Myth and Magic, The Thrill of the Horror Film, and the Science Fiction + Fantasy Hall of Fame — also give glimpses into movie genres.

A few highlights of MoPOP for me were the vintage photos in the new Contact High: A Visual History of Hip-Hop, the wow factor of the huge HD-LED screen at the Sky Church, and the amazing Guitar Gallery featuring guitars from numerous music legends along with clips of nearly 30 musicians including Poison Ivy, Slash, Stevie Ray Vaughan, and Bob Dylan.

Pro Tip: Seattle’s iconic Space Needle is right next door to Chihuly Garden and Glass and MoPOP, and the three make for a great trio of outings in the Seattle Center area, although, it’s probably best to wait for a sunny day to experience the views from the Space Needle.

For something warm and comforting on a rainy morning, what could be better than soup dumplings, shrimp potstickers, and hot tea? I love dim sum brunch, and the Taiwan-based chain, Din Tai Fung, had long been on my list of places I must try.

Luckily, Seattle has three locations of the popular restaurant. My family and I stopped in at the spot in the beautiful five-level Seattle Pacific Place mall on a rainy Friday morning. We ordered a variety of dim sum choices such as the tasty — and photogenic — cucumber salad, the seaweed and bean curd in vinegar dressing, the pork xiao long bao (soup dumplings), and sliced chicken noodle soup. It was the perfect antidote for the damp, cold November day!

For a glimpse into Seattle’s distant past, consider looking down into the subterranean passages that run beneath the sidewalks and streets in the Pioneer Square neighborhood.

Bill Speidel’s Underground Tour takes tour groups deep beneath the modern-day walkways into tunnels that were once the main roadways and first-floor storefronts of old downtown Seattle. Along the way, you’ll pass by old signs, vintage skylights, and restored saloons such as the inside of Doc Maynard’s Public House, where the tour begins.

The tour passes through the above-ground historic Pioneer Square before heading into three different sections of the underground. My tour included about 30 people and our tour guide regaled us with entertaining stories about the exploits of early Seattleites. The tour bills itself as “history with a twist,” and it certainly lives up to the slogan.

For a chance to travel through time and space, Seattle’s Museum of Flight is a not-to-be-missed experience. From the early days of airmail, through the Apollo space exploration of the 1960s, and into the future, the museum offers a comprehensive look at the wonders of flight.

Billed as the “largest independent, non-profit air and space museum in the world,” the Museum of Flight is sure to astound visitors young and old with its massive collection of aircraft, spacecraft, artifacts, galleries, and exhibits that touch on the past, present, and future of flight.

The museum also currently features an interesting traveling exhibition by Walt Disney Studios that chronicles the contributions of the Allies’ war effort during World War II.

For a bit of early-1900s glamor, head for the 484-foot-high Smith Tower, which was Seattle’s first skyscraper and the tallest building west of the Mississippi River when it was built in 1914.

Today, visitors can browse the ground floor historical exhibits that tell stories of the culturally iconic tower through the decades, before taking a vintage elevator up to an open-air observation deck. Even though the observation deck is probably best experienced during clear weather, the elevator also offers a nice rainy-day ride up to the speakeasy-style bar where visitors can sip a classic cocktail.

When I visited, I was lucky to get a break in the rain, so I was able to take in Smith Tower’s fantastic 360-degree views of Seattle.

Any visit to Seattle should include a jaunt around Capitol Hill, the neighborhood Visit Seattle describes as “arguably Seattle’s coolest neighborhood.” The numerous bars, cafés, breweries, and cideries make Capitol Hill natural for a food or beverage crawl, and many of the spots are cozy on a rainy afternoon or evening.

On my recent trip, I checked out the quirky and fun Montana to try the bar’s famous Montana Mules. I then hopped over to Dino’s Tomato Pie for a slice of the signature square pizza pie. Other fun places to try on Capitol Hill are Capitol Cider for a cider flight, the southern-influenced Wandering Goose café for fried chicken and pimento mac and cheese, Elysian Brewing Company for a range of craft beers, and the local favorite Rachel’s Ginger Beer for a tart blood orange non-alcoholic beverage.

Along with the Space Needle, Chihuly Garden and Glass, and MoPOP, the Seattle CityPASS includes the Seattle Aquarium (another great rainy-day activity), where visitors can experience sea otters, giant Pacific octopus, and tufted puffins. The CityPASS also includes the excellent Woodland Park Zoo near the Ballard neighborhood and the exhilarating Argosy Cruises Harbor Tour. The pass comes with a choice of five total attractions: the Space Needle, aquarium, and three others.

Seattle has many other must-do rainy day activities as well, including the Seattle Art Museum; the Volunteer Park Conservatory, a historic greenhouse and botanical garden on Capitol Hill; and the chocolate factory tours at Theo Chocolate, located in Seattle’s Fremont neighborhood.

To make your rainy adventure as comfortable as possible, remember to pack a rain jacket, waterproof boots, and an umbrella. Purchasing an ORCA card also comes in handy for taking the convenient light rail system that connects the Puget Sound. 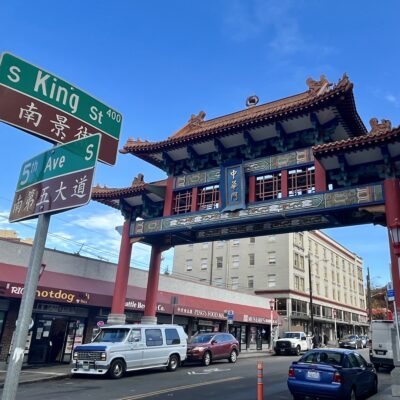 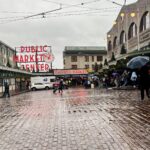 Seattle9 Amazing Things To Do In Seattle When It’s Raining 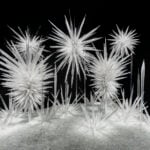 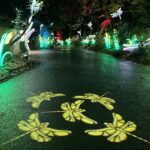