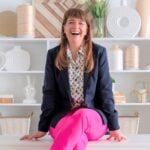 Cobblestone streets, peppermint-dusted hot cocoa, and the quiet charm of a place that feels like you’ve stepped into a Norman Rockwell painting…there’s no place quite like New England during the holidays. One of the oldest parts of the country, the coastal enclaves and quaint Main Streets found throughout Connecticut, Maine, Massachusetts, New Hampshire, Rhode Island, and Vermont are like none other.

If your idea of Christmas in Vermont conjures up images of snow-covered bridges festooned in holiday finery, snowshoes propped up against the local tavern door, and costumed carolers in the town square (called “the Green” here), look no further than Woodstock. While you’ll find holiday cheer around every corner of this quaint historic village throughout the Yuletide season, Woodstock takes “old-fashioned Christmas” to the next level during the annual Wassail Weekend. Three days of merriment include learning about Victorian Vermont traditions at historic Billings Farm & Museum, horse-drawn carriage rides around town, a holiday parade, and cookies with Santa.

Holiday shopping at the Red Wagon Toy Company feels like a step back in time as does a cup of cheer at the Woodstock Inn & Resort, a luxury inn that can trace its roots back to a tavern that existed there as far back as 1793.

Where else would you expect Santa Claus to arrive by lobster boat than Kennebunkport? Kris Kringle’s grand entrance is part of the town’s annual Christmas Prelude, now in its 41st year. Taking place December 1 to 11, 2022, the Prelude includes a ton of holiday events, including the lighting of the lobster trap Christmas tree in Cape Porpoise Square (yes, a towering “tree” made of stacked traps reaching 50 feet into the sky) plus other more “traditional” tree lightings, fireworks, a parade of holiday hats for both the young and young at heart, a dog parade (holiday attire encouraged for four-legged friends!), and a family street festival with strolling carolers, ice sculpting, and live music.

Pro Tip: Because it’d be a shame to visit Maine without enjoying a lobster roll, make it a point to dine at the festively decorated Alisson’s in the center of Dock Square. If lobster rolls don’t entice you, the “chowdah” will warm your heart and soul equally.

While Salem steals the national spotlight throughout the month of October for its haunted Halloween happenings, this city on Massachusetts’s North Shore is often overlooked the other 11 months of the year — and that’s a mistake. This seaport city, which predates America itself, knows a thing or two about embracing the holiday spirit.

In a triumphant return since the pandemic, the Christmas in Salem Holiday House Tours on December 3 and 4 are the best way to take in the city’s historic Georgian- and Federal-period homes, which span four centuries of Salem’s past, all decked out in holiday decor.

The pedestrian-friendly tour comfortably advances from home to home with plenty of time between stops, but wear comfortable shoes as some Salem streets are uneven.

A more lighthearted holiday experience is a reimagined performance of A Christmas Carol — on wheels (November 26 through December 23). Ride the trolley with Scrooge as Dickens’ timeless seasonal holiday classic tale is brought to life in a completely unexpected and hilarious way.

The City by the Sea might just be the quintessential destination where people “summer” as a verb, but Newport is resplendent throughout the holiday season. Wasting no time embracing the season, an illuminated boat parade on Newport Harbor draws thousands to the downtown waterfront the day after Thanksgiving (Note: typically it’s standing room only) and the Christmas spirit thrives on through December.

Synonymous with Newport itself, three spectacular Gilded Age mansions — The Breakers, Marble House, and The Elms — are so decked out in their festive finery (think ornate Christmas trees, fresh wintergreens, and an elaborate toy train set), you’ll begin to wonder if you left your bustle dress and parasol behind.

A Yuletide season staple dating back more than 50 years, Christmas in Newport is a month-long event that includes a roster of holidays happening while downtown shops, local eateries, and a towering Christmas tree glowing in endless strings of white lights on Bowen’s Wharf set a scene reminiscent of a Hallmark Christmas movie.

Pro Tip: While the Newport Mansions Gilded Age splendor is on display inside these “cottages,” the back terrace at The Breakers will be introducing new fire pits this year, where visitors can enjoy warming stations, adult beverages, holiday sweets, and even make chocolaty s’mores.

Nestled on the scenic Connecticut shoreline, Essex made history and headlines during the War of 1812, when the town was raided by the British Navy. Today, Essex leans into its historical roots, perhaps no more so than at historic Essex Village, where you’ll find white picket fences and Federal-style homes and buildings not much changed from when they were built centuries ago.

During the Christmas season, the village is a cacophony of colorful lights and small-town charm. A visit is incomplete without sipping some holiday cheer at The Griswold Inn, which has been welcoming visitors since 1776.

Ever the holiday hotspot, The Griswold Inn even appeared in 2018’s Hallmark Christmas movie, Christmas at Pemberley Manor. But the quintessential holiday must-do for families, especially for a multi-generational experience, is a locomotive-powered “sleigh ride” on the North Pole Express. Santa and Mrs. Claus, and their friends, lead festive sing-a-longs and pass out sugar cookies and smiles on every ride.

Home to the highest elevations in the Northeast, New Hampshire’s White Mountains encompass myriad cities and towns that sparkle come Christmastime. If traveling with young ones, set a day aside for Santa’s Village, a delightfully quaint Christmas-themed park in Jefferson with 23 rides bearing apropos names like the Great Humbug Adventure and Yule Log Flume.

In nearby Whitefield, the holiday spirit is palpable at the Mountain View Grand Resort & Spa, a classic New England grand hotel. The Rocks Estate Christmas Package includes lodging at the resort and a visit to a 1,400-acre Christmas tree farm where you can pick out a wreath and fresh-cut Christmas tree, then take a horse-drawn carriage ride through the stunning property.

Further south, downtown North Conway feels like a slice of untouched Americana, complete with a five-and-dime, old-time penny candy, and hard-to-find nostalgic foodstuffs at Zeb’s General Store, and an ornate train station, where you can hop a ride on the Conway Scenic Railroad. This time of year, the railroad has a special Santa’s Holiday Express ride, an hour-long seasonal journey down the Conway Branch (ideal for families with young children).

Spend just a few minutes in Westerly, and you’ll quickly see why pop star Taylor Swift regularly escapes to her home (one of many!) here in this quiet coastal enclave. While the population swells exponentially during the summer months, locals will tell you the magic here peaks at Christmastime. New this year is Starry Nights, a free holiday art installation connecting downtown Westerly and its neighbor, Pawcatuck, Connecticut, from December 9 to 26.

At the Weekapaug Inn, you can get cozy under the stars (and stay warm wrapped in a fur heated blanket!) to take in holiday films like Miracle on 34th Street, The Nutcracker, and The Four Realms or the cheeky Four Christmases. For a completely posh private dining experience with European holiday vibes, head to the Ocean House, where the luxury hotel has created a French Alps-inspired “gondola village.” The quartet of restored vintage ski gondolas is outfitted with cozy dining tables, chandeliers, and multi-course menus, all surrounded by an enchanting winter wonderland.

Just 30 miles from the mainland, Nantucket feels a world away. Its timeworn cobblestone streets, weathered saltbox buildings, and delightfully charming downtown are sprinkled with more than 100 Christmas trees this time of year, decorated by local merchants, nonprofits, artists, and children. While the annual Christmas Stroll, marking its 47th year the first weekend of December, lures thousands of spirited revelers, Nantucket’s Christmas magic is palpable the whole month through. Make time to visit the Nantucket Whaling Museum, where the Festival of Trees transforms the museum into a winter wonderland. An elevator makes accessing each floor easy.

Pro Tip: Don’t miss the museum’s observation deck, whether by foot or elevator, as you’ll be rewarded with panoramic views of the harbor, the Brant Point Lighthouse, and downtown.

Amidst the shadows of Vermont’s tallest peak, Mount Mansfield, Stowe is the kind of place that will give any bucolic U.S. mountain town a run for its money. Though a magnet for outdoor enthusiasts, the town’s signature seasonal event, A Traditional Christmas in Stowe, equally lures visitors from far and wide. The northern Vermont town buzzes with a tree lighting, a children’s lantern parade, wagon rides, a holiday bazaar, ice skating, ornament and cookie decorating, and, of course, the arrival of Santa and Mrs. Claus.

When it comes to accommodations here, The Lodge at Spruce Peak brings the holiday magic. Stowe’s only ski-in, ski-out luxury resort is the perfect place to spend the night, or a night under the stars at the outdoor ice-skating rink.

Pro Tip: Take a family photo in front of Stowe Community Church, whose striking 170-foot white spire has been the beacon of this village since 1863. It is said to be one of the most photographed churches in the world. 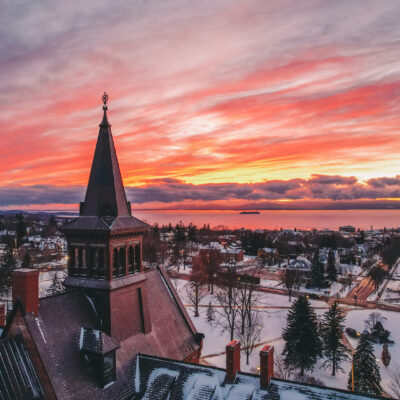 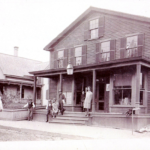 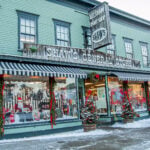 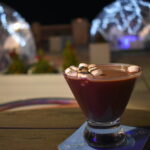 New England9 Most Romantic Things To Do In New England