Archaeologists have unearthed an ancient Christian monastery on an island off the coast of the United Arab Emirates believed to be more than 1,400 years old.

Located on Siniyah Island, scientists believe the site dates to before Islam spread across the Arabian Peninsula.

Carbon dating of samples from the foundation place the monastery between 534 and 656 A.D., just prior to the rise of Islam in the 7th century.

Dr. Timothy Power told the Associated Press that the discovery is significant in the UAE, which he described as a “melting pot of nations.”

“The fact that something similar was happening here 1,000 years ago is really remarkable, and this is a story that deserves to be told,” Power said.

This is the second monastery found in the UAE. Archaeologists found the first one in the 1990s on Sir Bani Yas Island off the coast of Abu Dhabi near the Saudi Arabia border.

This latest find comes on an island — Siniyah — whose name translates to blinking lights because of the vision created when the sun pounds down on a series of sandbars on the island. Archaeologists discovered the monastery under one of the sandbars on the northeast part of the island.

“It’s a really fascinating discovery because in some ways it’s hidden history. It’s not something that’s widely known,” Power said.

The Floor Plan And What’s Inside

Its floor plan suggests the monastery featured a single-aisle church. There are rooms for baptisms, an oven for baking bread for communion, and a nave that likely held an altar.

“We also found oversized glass chalices,” Power told The National. “They are not the sort to drink from and were intended to deliver the Eucharist and for the ceremony.”

A second building features four rooms and a courtyard, possibly the home of a church official such as an abbot or bishop.

A few hundred yards away are buildings believed to be part of a pre-Islamic village.

Power said the site most likely was not built by visitors but was an Arab Christian building. He said both Christianity and Islam coexisted in the area for about three centuries.

“A narrative of violent conquest doesn’t work,” he said. “The place was slowly abandoned. There was no sign of devastation or violence or burning. There was incremental cultural and social change as Christianity faded out and Islam became dominant.”

The discovery and dig have been sponsored by the UAE Culture Ministry.

Love ruins and archaeology? See all our coverage here. 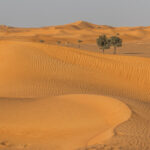