My 13 Favorite Stops In The Black Hills Of South Dakota

South Dakota recalls images of heads of past presidents, Kevin Costner’s wild experiences, and blustery long-haired easy riders on noisy motorcycles. All of this can still be found in the Black Hills of South Dakota, but there is so much more.

During a crossroad period during my middle age years of deciding what I wanted to be when I grew up, I moved to Rapid City to be closer to my family. Retirement loomed ahead, and my husband and I began our search for a final home in these beautiful hills full of Ponderosa pines, natural shimmering lakes, and rugged wildlife.

For the next ten years, we followed the Black Hills trend of Sunday afternoon day trips. Along the way, we discovered unique Black Hills places that have been around for many years because the locals love and support them long after the tourist season is over.

Here are a few of my favorite places, in no particular order.

Ok, maybe I will list my very favorite spot first since the place and event occur only once a year with a short window to see young bison calves frolicking with their mothers up close. The annual Buffalo Roundup and Arts Festival takes place every October when thousands of bison are rounded up the old fashion way, with cowboys on horses. While corralled for a few weeks, the bison are checked for illnesses and new calves tagged before being released to freely roam their 71,000-acre home. The corrals are located on Wildlife Loop drive.

Pro Tip: Many bison roam freely near the corrals until they are all released. Do not feed or get out of your vehicle — they are very protective of their young.

On Highway 16A just south of Mount Rushmore is a hair-raising serpentine road named Iron Mountain Road with three mountain tunnels. Take your time and watch for distant views of Mount Rushmore as you leave a few of the tunnels. More of these tunnels are in the nearby Custer State Park.

There are so many wonderful hiking trails throughout the Black Hills area that it is difficult to select a favorite, but the Cathedral Spires trail in Custer State Park is pretty close to perfection. This trail’s difficulty level is strenuous, but the views are well worth the climb up and back for 2.3 miles. The spires are a registered National Natural Landmark and are named for their resemblance to organ pipes in a cathedral.

My next favorite trail is a short hike around Sylvan Lake located also within Custer State Park. This is also a wonderful place to kayak. The trail snakes between mighty rock formations but is an easy path and much of the trail is wheelchair accessible. Take a few minutes to step inside the beautiful Sylvan Lake Lodge for a nice tour of the lobby lined with western art.

4. Home On The Range Cuisine

If you’re in Custer State Park during lunch, stop at the Blue Bell Lodge located along the Wildlife Loop next to the horse camp. Chuck-wagon cookouts and hayrides have been a tradition for many years during the summer. However, if you’re in between cookouts, stop in the rustic log café for delicious bison chili or rattlesnake sausage, and have a drink at the bar that uses saddles as bar stools.

A former United States Army post active from 1878 until 1944, Fort Meade is located near Sturgis and is currently the Black Hills Veteran Health Administration. Designated a National Historic District, the prominent red brick buildings scattered over acres between oak and cottonwood trees still tell the story of our military’s role in securing our freedom, for more than one war. It is one of the most beautiful historic forts in the nation, and where the Star Spangled Banner was sung for the first time at a military institution in 1892, long before it became our national anthem. It is the perfect place to relax and eat a picnic lunch while touring the Black Hills.

Pro Tip: The inspirational Black Hills National Cemetery is only a few miles away and also worth a stop to honor our soldiers, especially during Memorial Day when flags are placed on each grave.

A goal of many South Dakotans is to hike or bike the entire 109 miles of the George S. Mickelson Trail during their lifetime. Using an old railroad track to guide the trail’s direction, the 10-foot-wide trail starts in Deadwood and ends in Edgemont, meandering along the wide-open prairie, shaded mountain valleys, clear cold creeks, and Ponderosa pine forests. There are four hard rock tunnels, abandoned cabins, forgotten cemeteries, and a few ghost mines along the way. The trail is very popular with serious cyclists and backpackers who can purchase overnight permits.

Pro Tip: Grab a detailed map of the trail from the Black Hills Visitor Center in Rapid City.

Between the pine forests and amazing rock formations in the Black Hills are many miles of prairie and rolling grasslands that provide food for bison, elk, and other wildlife. Most tourists never realize there are two beautiful caves underneath their feet. Wind Cave National Park is one of them, however, my favorite place at this park is above the cave where prairie dogs rule. It seems like hundreds of little furry heads pop up from the ground, some just a few feet from you. If you are lucky, a black-footed ferret might slip by.

Pro Tip: Take binoculars and quietly stand very still for at least ten minutes as they are shy animals.

Save the cave tour until you reach Jewel Cave National Monument, a true “gem” of fragile brilliantly colored formations that sparkle when touched with light. Considered the third longest cave in the world, over 210 miles of passages have been mapped and surveyed. Don’t worry, the tour is not that long.

Pro Tip: There are four different guided tours available that are tailored from easy to strenuous and a short path for wheelchair users.

One of the best-kept secrets in South Dakota is Hill City, known for classy art galleries of area artists centered in a quaint square block off the main drag. Park anywhere and walk to everything. Near the end of the historic district is the Black Hills Institute, famous for finding the largest intact T-Rex skeleton in the world only to have it taken by the FBI late one night. I’ve never been disappointed at any downtown restaurant, but an interesting place for a good steak is the Alpine Inn housed in a Bavarian charming hotel built in 1884. Don’t miss a wine tasting at the fifth-generation Prairie Berry Winery on Highway 385 just outside of town where award-winning wines are made from hand-picked fruit grown in the surrounding prairies.

Pro Tip: During the summer, there is a monthly event downtown. So, watch the Hill City website.

Providing excellent food since 1909, the Latchstring Restaurant and lodge began as a necessity for loggers from the Tie & Timber Sawmill. Their Sunday buffets are a big hit, but my favorite menu items are their signature dishes — trout almondine or buffalo stew. Located halfway along the Spearfish Canyon Scenic Byway, just across the street from the restaurant is a nice accessible concrete trail leading to Roughneck Falls.

Often overshadowed by the nearby town of Deadwood, its neighbor town of Lead (pronounced LEED) is an excellent example of an authentic mining town where the Homestake Gold Mine Company operated for many years. Tours of the stunning Homestake Opera House and the Black Hills Mining Museum both on Main Street are available. On your way out of town where the Spearfish Canyon Scenic Byway crosses Highway 14A, stop at the rustic Cheyenne Crossing store. Established in 1878 as a stagecoach stop, they serve the best legendary Indian taco in the Black Hills.

Pro Tip: The mine was repurposed into the Sanford Underground Research Facility. Tours are possible, but require an appointment. Instructions are on their website.

Deadwood is a popular place for a wild west experience mingled with gambling, but my favorite place — the Mount Moriah Cemetery — is located a short drive from downtown. On a quiet side street is where Wild Bill Hickok and Calamity Jane are buried. Open 24 hours, however, it might be wise to take a daytime guided tour to learn the true story of how the two were laid to rest in the same cemetery but died many miles apart.

Everyone must see Mount Rushmore National Memorial, especially the interpretive center. Be sure to take the short boardwalk wheelchair-accessible Presidential Trail and slurp a monumental ice cream cone using Thomas Jefferson’s family recipe. However, my favorite place is not on the memorial grounds, but at the back of the mountain. You cannot walk to this place: when leaving the parking area, make a right and drive just a few miles to a small parking lot perfectly placed as soon as George Washington appears. It is a serene place, and one of the most beautiful views of our beloved George.

Pro Tip: During the fall, specially trained workers “rock climb” on the faces and make repairs to cracks in the rock. Look for dark dots and use binoculars to watch them swinging from ropes on the heads.

For more information on traveling to South Dakota, check out these articles: 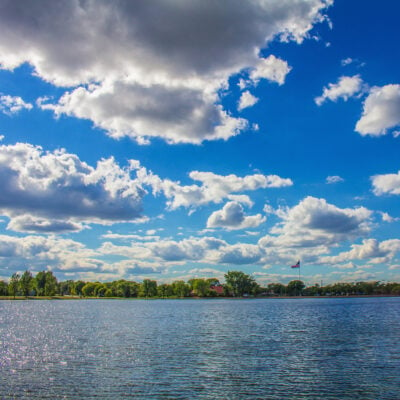 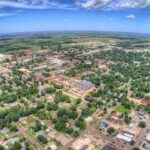