6 Fantastic Underwater Adventures To Experience In The Maldives

The entire land area of the Maldives is just 115 square miles, sitting in 35,000 square miles of ocean, and with few islands bigger than 300 acres. In other words, the ocean makes up more than 99 percent of the entire country — so if you are planning on holidaying here, you’d better love the water!

The stunning islands of the Maldives are best known as the destination you head to for some serious rest and relaxation. Think sandy beaches, swaying palm trees, lazing in hammocks, indulging in massages and spa treatments, and sipping on fruity cocktails at sunset. But there’s more to offer here! The Maldives is part of an extensive underwater mountain range, with vivid corals around the rims of ancient volcanoes. Known as one of the world’s most desirable destinations for year-round scuba diving and snorkeling, the Maldives is every ocean lover’s dream. The surrounding waters are home to an astounding variety of marine life, with nearly 200 species of hard corals, over 1,100 species of fish, 400 species of mollusks, 350 species of marine crustaceans, and more! In terms of biodiversity, the Maldivian waters are the oceanic version of virgin rainforests.

So come with me and let’s explore the astounding underwater world of the Maldives.

Snorkeling in the Maldives is an absolute ‘must do’ activity, it lets you explore the archipelago’s spectacular underwater world, without having to go too deep into the water. If you want to experience the underwater Maldives, but are perhaps not confident enough to go scuba diving, then give snorkeling a go. Many of the Maldives’ resorts have a house reef, located just out from the beach.  You can simply take your fins and mask, and float out into the shallow areas of the sea, often just a few steps from your room, as I did at Anantara Kihavah Maldives Villas. You don’t even need to be a strong swimmer. I had a friend with me who wasn’t confident in the water, but still wanted to see as much as possible. We simply got a lifebuoy with a rope attached. When she got tired, she grabbed the ring and took a breather, and when it was time to go back to shore, I towed her as I swam.

Pro Tip: don’t accidentally step on any of the living corals, this ecosystem is very fragile.

Our speedboat carved a white foam wake in the water as we left Anantara Kihavah Maldives Villas, on Kihavah Huravalhi Island, and headed out into the ocean. We were on our way to Hanifaru Bay, a forty-minute boat ride away, to swim with reef manta rays. The Maldives boasts the largest known population of reef manta rays in the world, and Hanifaru Bay is undoubtedly the best place in the Maldives to swim with them.

There’s honestly nothing quite as magical as your first sighting of a manta ray in the ocean. We arrived and donned our mask, snorkel, and fins, dropped over the side of the boat and into the water. For a few minutes we saw nothing, and then out of the corner of my eye, I saw a giant shadow. First one, then two, and then more. Manta rays heading my way, swimming in formation, so close they almost brushed against me as they passed. Manta rays are filter feeders — feeding on tiny organisms like plankton, shrimp, and jellyfish. As they glide through the water, they feed by filtering large volumes of water through their wide open mouths.

Swimming amongst the feeding aggregations of manta rays at Hanifaru Bay is one of the most mind-blowing things I’ve ever done. Reef manta rays are the second largest ray species in the world. Their width usually varies from 9–11 feet, though some very large ones can grow up to 18 feet in width. There are only a handful of places in the world where visitors can get this close to so many manta rays, and snorkel beside them as they feed.

Pro Tip: The manta ray feeding season is from May to November. However, the best time to visit Hanifaru Bay is from late June to October, when the monsoon causes a massive build-up of plankton, drawing hundreds of manta rays and whale sharks into the bay.

Be aware that diving is no longer permitted in the bay. Keep disturbances to a minimum and remember you can only snorkel here. Strict guidelines for visitors have been put in place. Snorkelers must keep a minimum of 9 feet from any animal, and refrain from any approaching, touching, or stroking. Photography is allowed, but without flash.

The Maldives is a hotspot for whale sharks as they are year-round residents here. The whale sharks found in the Maldives are a little smaller than those found elsewhere, though they can still easily measure up to 26 feet long — even though they are harmless, swimming with these creatures is not for the faint-hearted!

South Ari Atoll Marine Protected Area is one of the best places to see these whale sharks, with year-round snorkeling excursions providing excellent sightings. Hanifaru Bay, where we swam with the reef manta rays, is another great option for those traveling to the Maldives during the wet season (May to September/October) as the monsoon ensures massive plankton build-up, drawing in hundreds of whale sharks and manta rays. The narrow end of Hanifaru Bay is known as the world’s largest known feeding station.

Swimming with whale sharks is an experience of a lifetime, and the Maldives is one of the few destinations around the world where, in season, sightings of whale sharks are almost guaranteed. If you have whale sharks on your wish list, then I’d recommend you stay at a resort close to either South Ari Atoll or Hanifaru Bay. Then, a trip out to sea from your resort is an easy activity.

4. Swim Or Scuba With Sea Turtles

The Maldivian archipelago is home to five of the world’s seven species of sea turtles — green, hawksbill, loggerhead, olive ridley, and leatherback. Of these, the two species you are most likely to see are the green and hawksbill turtles; both are listed as endangered.

Snorkeling with sea turtles in their natural habitat is a magical experience, and it’s likely you’ll spot turtles in the waters around your resort. Swimming with turtles is as exciting as it sounds, and it’s not difficult to find yourself close to one or more, as they often appear when you least expect it. Don’t try and keep up with them — if they want to get away from you, they can use their paddle-shaped flippers to propel themselves at speeds of up to 22 miles an hour, and you’ll be hard-pressed to keep up with that!

Scuba diving is another way to get up close to sea turtles. Diving is an incredible way to see an entirely different world, and it’s one of those skills I’d recommend every traveler have in their repertoire. The warm, sparkling water of the Indian Ocean provides the perfect conditions for a thriving underwater world full of marine life, including turtles. The water is very clear and you can expect visibility ranging from 70-130 feet. There’s an incredible sense of peace that washes over you when you’re 10 or 15 feet underwater and a sea turtle comes gliding past, or when you spy one that’s wedged itself under an overhanging shelf of coral to take a nap.

Pro Tip: Most of the large Maldivian resorts have their own PADI-certified dive centers, where you can sign up for dives and courses. It doesn’t matter if you’ve never dived before, there are even classes for newbies! Some resorts have training pools where you can learn the techniques and get comfortable with breathing underwater before you go out to dive. We went out snorkeling and scuba diving from LUX* South Ari Atoll.

Turtle shell historically was a major export in the Maldives. It was traded with Arabia, India, and China. Turtle shell was made into boxes, caskets, bracelets, hair combs, and other ornaments. Turtle products are still being snapped up by buyers around the world. The rise of tourism in the Maldives has seen the slaughter of turtles for their shells, leading to a serious decline in turtle numbers. Tourists should be aware that purchasing jewelry or gifts made from turtle shells is a threat to the turtle population.

As we headed out from Lux* South Ari Atoll to search for whale sharks, a pod of spinner dolphins surfaced in the swell. Spinner dolphins are the most commonly sighted dolphins here, owing to their predictable daily migrations. They feed offshore every night and every morning travel into the atoll to rest. There are over 20 species of dolphins that call the waters around the Maldives home, so most visitors will come across dolphins at some point or another during their stay. The most common dolphins around the atolls are spinner, spotted, Risso’s, rough-toothed, and striped dolphin. The joy of watching a pod of dolphins playfully propelling themselves out of the water is an unforgettable sight.

While it’s entirely possible to watch dolphins, it’s not that easy to get up close to them. Dolphins are fast, wild creatures, and not terribly interested in mingling with humans. There are no “swimming with dolphins” activities offered at Maldives resorts and the only place you’re likely to be around dolphins is in the open ocean.

Pro Tip: If you are a keen scuba diver or want to spend more time spotting cetaceans, you may like to opt to stay on a liveaboard boat for your vacation. The length of most liveaboard itineraries in the Ari Atoll ranges from 7-12 nights and you are pretty much guaranteed to see a lot of dolphins. Dolphin watching in the Maldives is a year-round activity, but for an even better chance, December to March is generally regarded as the best time.

If you’re not in the mood for a swim, but you still want to see the amazing underwater world of the Maldives, how about wining and dining under the sea? Breakfast or dinner in the SEA restaurant at Anantara Kihavah Maldives Villas is a dining experience like no other. Imagine eating an eggs benedict while a clown fish examines you through the window, or perhaps lobster followed by prime-aged Wagyu beef, while black-tipped reef sharks glide past from the blue depths.

You may be on a tropical island, but that doesn’t mean you need to leave life’s luxuries behind. Anantara Kihavah Maldives Villas’ underwater wine cave, within SEA restaurant, features 275 labels from 15 countries, including vintages from Argentina, Australia, the Rhône Valley, and Bordeaux. This is the world’s first underwater wine cellar and one of only a handful of underwater restaurants in the country. The food is fabulous and the wine is delicious, but I must confess, no matter how good the wining and dining, nor how fascinating your dining companion’s conversation is, the sight of an endless stream of colorful fish, a silent sea turtle, or a group of spotted eagle rays swimming past is bound to distract you!

While an overwater villa in the Maldives may well be the highlight of your stay here, the opportunity to go below the water’s surface and into the breathtaking world of amazing creatures, colorful fish, and spectacular coral is unmissable. Take the plunge!

For more information on traveling to the Maldives, check out these articles: 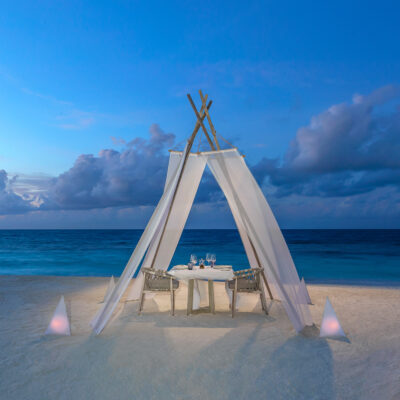 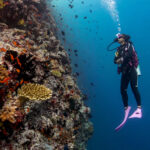 Maldives6 Fantastic Underwater Adventures To Experience In The Maldives 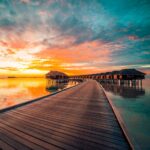 Maldives10 Amazing Experiences To Have In The Maldives 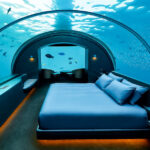 MaldivesMeet The Muraka, A Two-Story Villa Set 16 Feet Beneath The Ocean’s Surface