An Indian Street food restaurant holds one of the top restaurant honors from the James Beard Foundation. Chai Pani in Asheville received Outstanding Restaurant during the awards ceremony in Chicago on June 13.

In his acceptance speech, Executive Chef and Chief Chaiwalla Meherwan Irani said, “It’s been the greatest privilege of my life to have a team that I’ve found that I work with every day that embraces that philosophy.”

Chai Pani means “tea and water” and is slang in India for grabbing a cup of tea or getting “a little something.” The restaurant is located in downtown Asheville.

“The only guiding principle that we had was an Indian spiritual quote, ‘mastery in servitude.’ And this idea that if every day every act you do is an act of service that you can not only transform yourself but transform the community, society around you and maybe the world.”

Chef Meherwan Irani opened the restaurant in 2009. He’s a self-taught chef with four James Beard Award nominations for Best Chef. The former car salesman accredits his success to the amazing people he works with, including his business partner and wife, Molly. She grew up in the restaurant scene, the daughter of parents who owned an award-winning restaurant.

Chai Pani does not accept reservations, tables are on a first come, first served basis. Orders can be made for pickup and delivery.

For more on Asheville, check out these articles: 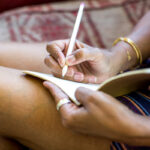