Everything You Need To Know About Halloween’s Chilling Irish History

Did you know that Halloween originated in ancient Ireland? Halloween, an amalgamation of both pagan and Catholic traditions of connecting with the dead, is celebrated each year on October 31. I’ve learned more about the ancient Celtic festival of Samhain (pronounced sow-in) and how it’s led to the costumes, symbols, traditions, and superstitions of modern-day Halloween.

The Celts lived 2,000 years ago, primarily in the area that is now Ireland, the UK, and parts of France. They celebrated their New Year on November 1. This marked the end of the harvest, the end of summer, and the beginning of the dark, cold winter that many associated with death.

The Celtic festival of Samhain allowed for a great celebration with the hard harvest work completed. Druid priests sacrificed animals and crops in giant bonfires and encouraged the wearing of costumes, often animal heads and skins, to ward off ghosts, including the spirits of their ancestors they feared would carry them off. These bonfires attracted bugs which, in turn, attracted bats. This led to the association of bats with harbingers of death. The superstitious believed that this day allowed for a dropping of the boundary between the living and dead; that the worlds could blur.

When the Roman Empire conquered the Celtic lands in the modern-day regions of the UK and France, Ireland was not affected. But the Roman influence added another dimension to Samhain: Feralia, a day when Romans commemorated the passing of the dead, and Pomona, the Roman goddess of fruit and trees, whose predominant symbol is an apple. These two supported the commemoration of the dead and the association with bobbing for apples.

All Saints’ Day, on November 1, was known in Middle English as Alholowmesse, or All-hallows, so the night before, the traditional night of Samhain was known as All Hallows Eve, which became Halloween.

People in Ireland continued to associate this time of year with the wandering dead and would set out gifts of food to feed the hungry spirits.

Where Halloween Is Celebrated

When Halloween came to America, the celebration was limited in colonial New England based on rigid Protestant beliefs, and popular in my home state of Maryland, where the Catholic influence was more pronounced. The early celebrations included the telling of ghost stories and the beliefs of the Native Americans in the area. People gathered at “play parties” to dance, sing, reminisce about the dead, and tell each other’s fortunes. While many of the early Halloween superstitions were born of fear, the Native American experience was one of celebration, a reunion with their ancestors as part of the natural cycle of life.

Towards the end of the 19th century, America was flooded with new immigrants, especially those emigrating from Ireland to avoid the Potato Famine, and Halloween celebrations became more of a national affair. While there was a move to make the holiday more about community than ghosts or witchcraft, some young women continued to believe that on Halloween they could divine their future husband.

“I put a spell on you because you’re mine.”

Traditions Around The World

Many matchmaking traditions came from this era. Women might mark apples before dropping them in a tub of water. The man who bobbed for that apple would be a marriage match. When it was the women’s turn to bob for apples, the thought stood that whoever won would marry first.

If she was able to peel an apple in one long strand, she would toss the peel over her shoulder. If it landed in the shape of a letter, that was her future husband’s initial.

If she stared into a mirror on Halloween in a darkened room, legend has it, she could see the face of her future husband in the reflection.

It was the Irish that brought the Jack o’ lantern to the holiday event. In Ireland, Jack o’ lanterns were carved from beets or turnips as well as potatoes. The name itself comes from the legend of “Stingy Jack.”

The Irish make their own versions of Jack’s lanterns by carving scary faces into turnips, and in America, the plentiful pumpkins, placing them in windows or near doors to frighten away Stingy Jack or other wandering spirits.

By the early 20th century, Halloween had become a community celebrated holiday with parades and parties and, in the 1950s with the increasing number of baby boomers, parties moved into the classroom.

This revived trick-or-treating as an inexpensive way for the entire community to share the Halloween celebration. Families would prevent tricks and vandalism by providing children with candy, small toys, or coins. It wasn’t until the 1970s when candy manufacturers made the wrapped, factory-made candy. 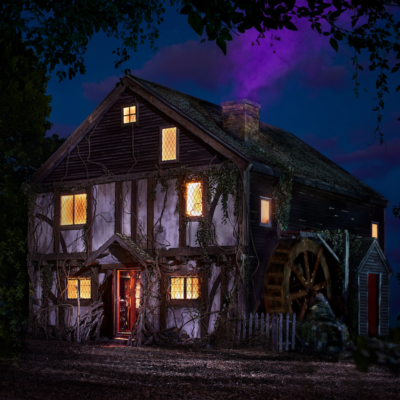 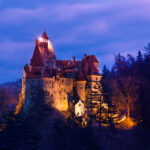 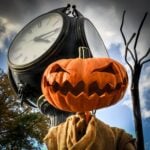