As if the many fabulous above-ground monuments in Turkey, and the exceptional landscapes like Cappadocia, aren’t enough to inspire anyone to visit, there are also sites that many visitors don’t know about. They are underground, and given the summer heat in Turkey, they offer an ideal opportunity to escape the high temperatures.

These locations are either entire towns, cisterns, churches, or tombs, but none of them have disappeared because of natural disasters like earthquakes, floods, or sandstorms. They have all been built on purpose, an incredible feat of engineering and architecture, considering how many centuries old they are. There are 36 underground cities in Turkey, most of them in Cappadocia. You can easily theme your trip around visiting the many underground locations, including Istanbul. Each is an adventure, giving insight into history, culture, and art, not to be found above ground. It doesn’t really matter what time of the year you visit. Underground, you are protected from the elements. In case you wonder, it does snow in Cappadocia.

Located across from the Hagia Sofia on the Sarayburnu peninsula, this is the largest of several hundred underground cisterns that supplied Istanbul with water. Built in 532 by Byzantine Emperor Justinian, the cathedral-size cistern measures 453 feet by 213 feet and is more than 30 feet high. The vaulted roof is supported by 336 carved marble columns decorated with Ionian and Corinthian capitals and arranged in 12 rows. The cistern could hold a staggering 2,800,000 cubic feet of water that came via aqueducts from the Belgrade Forest.

Visiting the cistern is a truly magical experience. You descend 52 steps to the entrance and are greeted by the forest of columns, subtly lighted from below. Often, classical music is piped in to enhance the dream-like view. The water level is kept low and goldfish swim among the rows of columns. Walkways and steps lead around the cistern to make access easier for visitors who previously only could move around by boat. (see the James Bond movie: From Russia With Love).

Make your way to the northwest corner where you’ll find two columns with their bases formed of two carved images of the Medusa. One is upside down, the other is turned sideways. Legend has it that they were placed this way to divert the evil power of the gorgon’s eye. Close to the entrance, there is even a café where you can enjoy refreshments.

Pro Tip: This is a very popular Istanbul tourist attraction with long lines at the ticket counter. Avoid them by booking this tour.

Derinkuyu is the largest of several underground cities in Cappadocia. Located near Nevsehir or Goreme, this city is 280 feet deep and consists of 18 floors. It dates back to Hittite times but was fully developed in Byzantine times ( A.D. 780-1180) The city served as a refuge and shelter during the many wars that raged in the region over the centuries. It could hold 20,000 people plus livestock and provisions. Each floor could be closed off by massive stones serving as doors. Narrow shafts provide ventilation. The population also had wine and oil presses and many other amenities and Derinkuyu was connected to other underground cities by a network of tunnels.

When visiting, be aware that there is little explanation provided to what you actually see. Therefore it might be a good idea to go on this tour which includes other sites too.

If you go on your own, watch for guides that are standing at the entrance and offer their services. They are quite good.

Pro Tip: Access is on foot through narrow shafts and over steep stone steps. The ceiling is low. If you suffer from heart or breathing problems or claustrophobia, you could be uncomfortable.

Dara is one of the oldest settlements in Upper Mesopotamia. Located just 19 miles from the equally ancient and fabulous hill city of Mardin, Dara dates back to Roman and early Byzantine times when it was an important settlement along the Silk Road. It spreads out over a large area and the most important parts to see are the fortified city walls, cave houses, cistern, and unique gallery graves that form the necropolis. Everything is carved into the limestone rock.

The cistern into which you can descend was actually discovered under a barn in the village of Dara and lies 82 feet underground and can hold 143,000 cubic feet of water. It dates from the 6th century and is carved into a fortification wall. It’s not as elaborately carved as the basilica cistern but amazes by its size.

The gallery graves were the burial place for hundreds of people, buried together in niches of the gallery. Reinvigoration ceremonies were carried out in Roman times. Excavations of the site are still ongoing. Above ground, the village of Dara is actually a collection of houses and some workshops where traditional clothes are shown as well as tools and traditional ways of harvest.

On top of the gigantic travertine terraces and hot springs of Pamukkale in western / Turkey sits the ancient city of Hierapolis. At the end of the 2nd century B.C., it was a popular and thriving spa town but the place harbors a much more sinister secret. In Roman times, it became known as the “Gate to Hell.” Toxic gases escaped from a hole in the mountainside, killing birds and small animals instantly. The Romans created a sanctuary called Ploutonion because they believed this was the gate to the underworld, belonging to the god Pluto and the deadly gases were the breath of Cerberus, the giant hound guarding the entrance to the underworld and protecting his master, Pluto. Sacrifices were made, exposing birds and even bigger animals to the toxic gases, accompanied by a priest who, miraculously, returned unharmed. Modern science has found a reason for this phenomenon: a high concentration of carbon dioxide, caused by a tectonic fault which runs directly underneath, escapes through the hole in the Ploutonion mineral-rich water, and toxic gases mix and get to the surface through the hole in the Ploutonion. However, the carbon dioxide dissipates quickly in sunlight and only remains fatal close to the ground and at night.

Who wouldn’t want to visit a place where mystery, legends, and reality mix in such a stunning way? You can reach Pluto’s gate from Izmir or Denizli, but you don’t need to fear for your life. Pluto’s Gate has been bricked up and a walkway leads around the site with a statue of Pluto on top.

The underground city of Kaymakli is located within the citadel of the same name, a few miles from Nevsehir. Its more than 100 tunnels are still used today as storage areas, stables, or cellars. The difference with Derinkuyu is that only four floors are open to the public and the tunnels are lower and narrower. The rooms are all arranged around ventilation shafts. To get there, you don’t need to go on a guided tour, if you don’t mind changing buses a few times you can visit on your own. Just make your way to Nevsehir, cross the market and you’ll find the entrance at the back. Pay your fee (in cash) and explore, but mind your head and your steps.

While you are at Kaymakli, you might choose to visit another underground part of the castle. A few years back, an exciting discovery was made during excavations of the vast area that the castle covers: a church and never before seen frescos. The church is thought to date from the 5th century A.D., and its thin walls had collapsed, leaving only the roof visible. The frescos that were surprisingly fresh in color had to be removed piece by piece and by hand from mud and debris. They show Christ rising to Heaven and the killing of bad souls. Nevsehir is quite a hub in Cappadocia and can be reached from many cities in Turkey thanks to motorways. Once there, find the market, cross through it and at the back you will find the entrance.

Demre is located in the southwest of Turkey, not far from Antalya. It’s an ancient Lycian city, dating from the 4th century B.C. Demre is famous for its great number of elaborate rock tombs, carved out of the rock in the form of houses and temples. This city of the dead was originally painted bright red, yellow, blue, and purple. The necropolis is divided into an ocean necropolis and a river necropolis, depending on which side it’s facing.

Demre also happens to be the home of St. Nicholas and features a church dedicated to him.

You don’t have to go underground to visit these unique and fabulous tombs and you can’t climb around among them but there are plenty of tours to allow you to see them.

Pro Tip: With toxic gases, narrow passages, and tunnels deep underground, these sites are not suitable for wheelchair users and people with disabilities. Assess your health, fitness, and phobias before you plan to visit any of these.

Discover the many unique aspects Turkey has to offer: 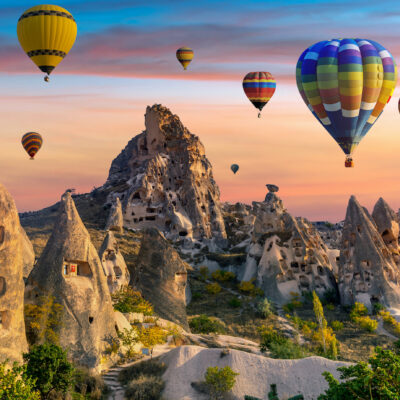