Honestly? September is my absolute favorite month to travel around Europe. First, the kids are back in school, and with them, their parents. The sun is perfect for sitting outside and swimming in the sea, but you can walk around the emptier city centers without suffering a heatstroke.

I don’t think there is a European city that isn’t worthwhile visiting in September: All the sunny regions are still sunny, all the northern regions not yet cold, all the cities less crowded but just as much fun. The classical music season opens with opera, concert, and ballet performances held in the most iconic venues, and it seems to be the month for antique fairs and flea markets, and two really fun ones feature in my list.

When you are planning a fall visit to Europe, should you need a nudge or two in a certain direction, read on, and see which recommended city break tickles your interest and will end up on your to-do list.

As the quote goes, “Paris is always a good idea,” but September sees the rentrée, the start of school, and brings all the Parisians back into the city. More Parisians and fewer tourists is surely a positive thing. Apart from all the good things Paris has to offer in September — the still sunny terraces, the European Heritage Days (book early!), and the opera and philharmonic opening their season — there is also the Foire de Chatou, an art and antiques market held on the Île des Impressionists beside the River Seine. The locale is beautiful, the market wonderful, with many treasures to be found, and this being France, there are plenty of good food and wine stalls.

Pro Tip: To get there, take the RER A for four stops from Charles de Gaulle-Etoile, direction St Germain-en-Laye. At stop Rueil-Malmaison, you’ll find a regular free shuttle to the market.

Staying with the antique fair cum flea market theme, every September the northeastern city of Lille holds the Grande Braderie, Europe’s largest flea/antiques market, which completely takes over the city. There are maps printed with what stalls are located in which street, all the local shops and boutiques join in and hold a sale, and live music events. Food stalls everywhere turn the entire weekend and the entire city into one great big shopping party. Lille is an easy 2-hour drive from Paris, so this could be done in a day, but it is best to make a (long) weekend of it, as there is much to see and do.

Pro Tip: For sustenance and a quiet corner away from the bustle, have lunch in the lovely L’Assiette du Marché, which is not only pretty inside and out, but also serves great seasonal food.

In non-pandemic times, this is THE place to be if you find yourself in Germany at the end of September. The Bavarian city of Munich is a city to visit for its museums, the markets, the river and the parks, but at the end of September, the Wies’n, i.e., Oktoberfest is held for those who like beer, merriment, and the inevitable crowds. People flock from near and far to sit in gigantic tents, drink beer out of gigantic glasses and eat gigantic pretzels. It is indeed a festival of superlatives. There are tips and tricks on how to get the most out of the event, but mostly, you just have to go with the flow. It is a bit like Disneyland, just with beer. Put your normal life on hold while you’re there, and just enjoy, never mind the rest.

Pro Tip: There are some 7 million people attending this event over its three weeks, so book your slot early, and best not stay until closing time, because the streets are littered, quite literally, with drunk people.

From beer to wine, and the Budapest Wine Festival, every September Hungary’s capital city opens its doors to international wine producers who display their wares — and, most importantly, let you sample them – around the city. Some events take place in many of its most historic buildings, such as the Buda Castle. To accompany the wine festival, there are dozens of cultural events, dancing to live music, and many art and food stalls.

Pro Tip: And, talking about food, make sure you visit the historic Great Market Hall on an empty stomach and bring time and enough appetite to set yourself up for a bit of wine tasting.

Brighton is a seaside town on the southern coast of England, just a one-hour train ride south of London. It is full of history, has an iconic promenade and pier, a pebble beach, and superb shopping in the extraordinary lanes. Known for its relaxed and welcoming LGBTQ+ vibe, it is colorful, fun, and perfect for a September visit. Without the crowds, walking and discovering things are so much easier, and you can explore the world’s oldest aquarium and the UK’s oldest cinema, plus the extravaganza that is the Royal Pavilion with ease.

Pro Tip: Brighton has an incredible number of theaters, stages, and smaller clubs in which to see plays, comedy, live music, and all sorts of cultural events, so plan ahead for the nights you’re there.

The gorgeous city of Venice is an absolute no-go in summer. The crowds are unbelievable, and every tiny lane and canal is crammed full of visitors, making you feel sorry for the locals. But once September arrives, Venice can breathe again and starts enjoying itself. First off is the Regatta Storica, a fabulous rowing event with historic gondolas and historic costumes, turning it more into a water carnival instead of a race — but race it is — and taken seriously. And once you’re done watching this spectacular occasion, why not do some celeb-spotting? The Lido Film Festival, La Biennale attracts the famous and beautiful from around the world. Maybe you’ll get to spot George Clooney, who is a regular.

Pro Tip: Venice is always something special, so why not turn it into a true movie star experience by staying in the luxury Kempinski Hotel on the private island of San Clemente, conveniently located between Venice proper and Lido.

Zielona Gora, meaning Green Mountain, is a city in western Poland, and a historic town that was once a prosperous textile center, due to the influence of 13th-century Flemish weavers. It has a medieval town center, a deep-seated affection for all things folkloric, and its streets and lanes are dotted with miniature sculptures, which all have something to do with wine. And that is the reason to visit, period. The Green Mountains surrounding the town are covered in vineyards, and in September, the harvest is celebrated with great flair. For an entire week, the town celebrates the vine harvest with processions, cultural and sporting events, stalls lining the cobbled streets, and, of course, plenty of wine.

Pro Tip: More wine? Head to the town’s impressive and extensive wine museum to learn more about the history of wine in the region.

Villamartin, a small town in Andalucía some 50 miles inland from the city of Cadiz, is normally a town you’d drive through, or maybe stop for a quick bite while exploring the countryside of Andalucía. You might stop because of the scenic setting on the reservoir with the mountains as a backdrop, or to look at the Roman villas that remain in the town. But you probably wouldn’t linger.

Yet, in the third week of September, this small town is hopping with visitors which all come to celebrate the Feria de Ganado and the Fiesta de San Mateo. The Feria de Ganado is the oldest cattle fair in Andalucía and is held in conjunction with the fiesta, which features horseback-riding parades, fireworks, young people in full flamenco dress on the fairground’s wall of death, and reportedly, the best tapas in the region served while you are watching the festivities.

Pro Tip: There are otters living in the reservoir, so stay for a lakeside picnic and see if you can spot some.

Now here is a destination that you might not have thought of as European. And you can be forgiven for thinking it might be in Asia, as it is literally on the border and thinks of itself as European — just like Tbilisi — which is a short drive away. Yerevan, Armenia’s capital, is one of the world’s oldest continuously inhabited cities located along the Silk Road, and while dominated by mostly former Soviet-style architecture, the old, often-called Pink City sits below the imposing, snow-capped dormant volcano Mount Ararat.

Climb the stairs of the Cascade for the best views. Shop at the outdoor Vernissage market on Charles Aznavour Square and eat lavash, a thin flatbread often covered with cheese and thyme, at the Gum Market. And if you find yourself here in August, you can enjoy the Arts Festival celebrating local, regional, and international artists across the European and Asian border.

Pro Tip: Armenia is filled with incredible monasteries and churches, being the world’s first Christian nation, and just seeing Yerevan would be a shame. Book yourself some day tours to explore the country further.

Some European cities are better places to visit in the fall, when crowds, temperatures, and activities are ideal: 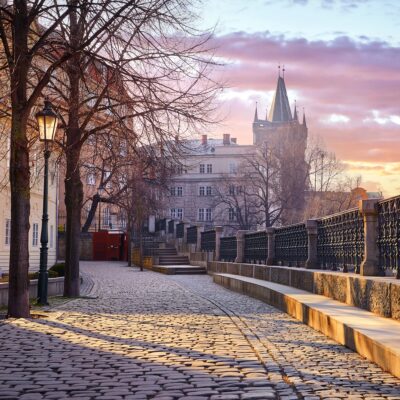