I love Atlanta but hate the traffic. When I want to explore Georgia around Atlanta and not have to deal with horns and crazy people cutting me off, there are amazing smaller cities nearby. Here are a few of my favorites, chosen because they have fewer crowds and less traffic and include a mix of activities and attractions that appeal to many ages and tastes. I visited these places on sponsored press trips but the opinions are mine alone.

Pro Tip: You don’t save time or encounter less traffic taking the bypasses around Atlanta. They have built up so much that traffic is worse on them. Tough it out and go straight through.

Roswell is 30 minutes north of Atlanta but it has a completely different personality. My favorite thing here is touring the three mansions that were part of the city’s birthright. For me, they made Roswell’s roots in the 1800s feel alive today. Old Mill Park was where Roswell King began building his mill, which was the start of the city and where I began my visit. Barrington King, Roswell’s son, built a Greek revival mansion named Barrington Hall.

King brought a few friends along. One of them, Archibald Smith, chose an agrarian lifestyle and established Smith Plantation. When we visited the slave quarters, I was pleased to see they show the history of its enslaved people after emancipation.

I love wildlife and nature, so I was happy to discover one of central Georgia’s little-known secrets in Roswell. The Chattahoochee Nature Center has indoor exhibits and an outdoor mini-zoo with native animals.

Roswell is a foodie hotspot. Table and Main is my favorite. I loved their fried chicken.

If you are ready for some adult beverages after dining, try Gate City Brewing Company. Roswell Ghost Tours got rained out for us, but our guide told us about the many places and interesting experiences on his tours.

Pro Tip: Roswell is very dog-friendly. There are doggie water bowls outside many stores.

From Atlanta, head north on I-75 for an hour-and-a-half and discover Dalton.

I like good whiskey, so I was happy to tour Dalton Distillery. The last time I visited, Raymond Butler, along with his son, Chuck, and his grandson, Trey, was making moonshine from sunflower seeds like his family did for generations. I just learned Raymond passed away, but the distillery still operates as he set it up. The family tradition continues.

Just across from Dalton Distillery, I was drawn to the old railroad depot. Since it’s also the visitor center, it’s a great place to get information.

After a sample of Raymond’s moonshine, I was happy to have someone else drive to Tunnel Hill, where we got to learn about why General John Bell Hood’s leg is buried apart from his body. Our guide took us through the Clisby Austin House where the story began. The home was a Confederate field hospital from 1862-1863. During that time, seriously wounded General Hood was brought in for treatment. Doctors had to amputate his leg and felt the general wouldn’t survive. They buried the leg here believing the body would follow. The general surprised them and survived.

We took a golf cart to the tunnel, where Federal raiders drove the stolen train The General, made famous in the 1956 movie Great Locomotive Chase. The tunnel is somewhat spooky. I could almost sense a ghost story here. Maybe General Hood’s spirit is hunting for his missing leg.

Ellijay is almost two hours north of Atlanta. Activities here are focused on the outdoors. I spent three days enjoying a relaxing change from hotels at a glamping spot that may be the state’s best-kept secret. It’s called Elatse’Yi, a Cherokee word meaning “verdant, green earth.” Elatse’Yi offers a whole new take on lodging. My well-furnished geodesic dome — with a soaking tub on my deck, a cowboy kitchen in back, and a picnic table with a mountain view — was heavenly.

I discovered an unusual attraction here. Expedition Bigfoot invites participants to take a serious look at the possibilities of Bigfoot really existing. I met with the owner, David Bakara. He told me he has been seriously investigating and has seen Bigfoot. Bigfoot has been seen often in the north Georgia Mountains. David’s research vehicle, called BRAT (Bigfoot Research and Tech), is an ATV set up for researching Bigfoot and is on display at the museum. I left that place seriously considering the possibility, “Could Bigfoot be real?”

If you want to get closer to nature, go kayaking at man-made, 3,200-acre Carters Lake. The water was too rough the day I was there, but I did see the visitor center with its marina and store. There are camping and cabin rental options and a seasonal restaurant. Coosawattee River Tubing Company offers shuttled tubing trips on the area’s scenic river.

If an apple a day really keeps the doctor away, R and A Orchards near Ellijay can keep you in perfect health. They grow so much more than apples. There are all kinds of seasonal fruit and vegetables at their roadside market plus a cafe. There are antique stores all over Ellijay for fun shopping. For dining, I enjoyed Cantaberry, Ellijay Coffeehouse, and Back Porch Bistro.

Travel 40 miles east of Ellijay to Blairsville. I tried tent camping at Vogel State Park, something I enjoyed a lot more when I was younger. I explored the CCC Museum. There are cabins that will be my choice when I visit again. I lived in Blairsville many years ago and found it so changed. Tourists have discovered it.

One new attraction since I lived there is the homestead of Byron Hebert Reese, “the Farmer Poet.” His home portrays early 20th-century farm life in the North Georgia Mountains.

Another new attraction is Grandaddy Mimm’s Distilling Company. In the 1990s, you couldn’t even buy a glass of wine in Union County. Today, the distillery is fun for a tour — even more so when you finish off the day at the Distillery while owner Tommy Townsend plays a concert with his band, the Waymore Outlaws, formerly the Waylon Jennings band.

The Paradise Hills Winery and Spa now sits on the land where my Blairsville home was.

The Old Courthouse on the Square is much as it was, with an interesting museum and, upstairs, the old courtroom that opens for Friday night concerts. Just off the square, the Grapelle Butt Mock House houses the Museum of Mountain Life.

While in Blairsville, I climbed the highest mountain in Georgia — with a little help from the trolley to the top of Brasstown Bald. The museum competes with the observation tower for the most fun there.

For breakfast, try Hole in the Wall on the Square and enjoy lunch at Downtown Pizza.

Pro Tip: Pay the extra $3 charge for the trolley. It’s a steep climb to the top of Brasstown Bald.

Head west for this one. The newest attraction in Columbus is Westville. Strolling down its streets, I felt like I was back in time, walking through a Georgia village in the late 1800s.

The Civil War Naval Museum is the only museum of its kind in the world, showcasing the naval battles of the Civil War.

The National Infantry Museum is next door to Fort Benning. The museum focuses on infantry as the front line of defense. It made me realize the sacrifices our military men and women endure.

Coca-Cola Space Science Center took me into space in a simulated shuttle called the Odyssey.

Springer Opera House showed what a well-to-do person experienced in a theater while Black citizens had the Liberty Theater where Ma Rainey frequently performed. Ma Rainey’s home was interesting to tour.

Columbus is situated on the Chattahoochee River. It was a chance to try white water rafting. This was a new adventure for me so I chose the easier morning Classic run. Our guide, Carson, instructed us on how to paddle and when to slide down on the floor of the raft. I almost lost my camera as we battled the rapids. It’s not for the faint of heart, but I’d do it again in a heartbeat.

After braving the rapids, I deserved a wonderful dinner. Saltcellar fit the bill. Another similar choice is The Loft, owned by the same restaurateur. For more casual dining, Minnie’s has soul food, which I enjoy. Country BBQ has my favorite lemon pie. It stands about a foot tall.

I love history, so the Marriott Hotel downtown across from the Convention and Visitors Center was a perfect choice for me. It began its life as a gristmill in 1861. For more dining choices, there are Houlihan’s and the Grist Mill located in the hotel.

The Tubman Museum is the largest museum showcasing Black history in the Southeast. It’s always been one of my favorites, but this was my first time seeing it in its new building. Way to go!

Macon is filled with historic places. Some of my favorites are Cannonball House with its Civil War cannonball still in place, Hay House that was so advanced for its time, and the newest, The Big House where the Allman Brothers lived in the 1960s and ’70s. I knew their music but never knew they were a big influence in getting Jimmy Carter elected president.

Another highlight for me was touring Capricorn Recording Studio, where Southern rock was born. My musical education was furthered on the Rock Candy Tour, a deep dive into Macon’s musical history. The Douglass Theatre, Macon’s historic Black theater, was not new to me, but the Rock Candy Tour emphasized its musical connections and the Walk of Fame out front recognizing Georgia’s musical giants.

Whenever I visit Macon, I am drawn to the mysteries hidden in the Ocmulgee Mounds. If you are in top shape, you can climb the steps to the top of Temple Mound. I did it in the past but skipped it this time. I took a candlelight tour once, and it was amazing.

I’m not a big sports fan, but I do enjoy the Georgia Sports Hall of Fame and Museum. My favorite here is Bill Elliott’s red NASCAR car.

I didn’t camp in Macon but checked out Lake Tobesofkee Recreation Area for possible future trips. Two of the parks, Arrowhead and Claystone, have camping. For dining, I tried Oliver’s, with its fresh food and unique style, and The Rookery, which was a favorite of both Otis Redding and the Allman Brothers Band. Piedmont Brewery and Restaurant is perfect for chicken wings.

While in Macon, I stayed at the 1842 Inn for its antebellum ambience, and I loved the strawberry French toast. 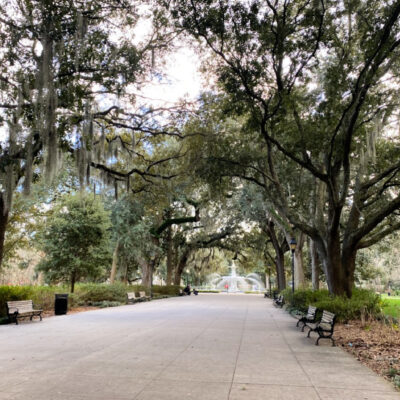 Georgia9 Vibrant Georgia Cities That Are Big On Southern Charm 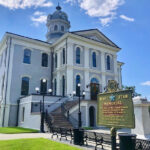 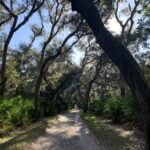 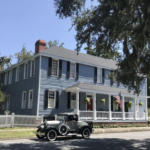 GeorgiaRent The House Aaron Burr Slept In After His Infamous Duel With Alexander Hamilton
Feeling Inspired? Book This Trip