Given that over one-third of the African continent is covered by desert, you really shouldn’t have too much trouble finding one to explore! From the Mediterranean Sea to South Africa and from the Indian Ocean to the Atlantic Ocean, the deserts of Africa are home to some of the most extreme landscapes and stark conditions on earth as well as some of the most beautiful. While you may be forgiven for thinking that there is plenty of nothing to see in deserts, they actually offer a window into unique environments and cultures, dating back thousands or millions of years, and, surprisingly, in some places, they are also excellent for wildlife viewing.

It is generally accepted that there are 10 unique deserts in Africa, and we are going to tackle them from largest to smallest.

With shifting sands, lost cities, and nomadic tribes, the Sahara is the granddaddy of all deserts. In fact, its size is comparable to that of the entire United States! This is the largest “hot” desert in the world (with temperatures reaching 122 degrees Fahrenheit) and the third largest desert on the planet (smaller only than those of Antarctica and the northern Arctic). The Sahara is around 7 million years old, stretches across 12 countries, and covers vast swathes of North Africa.

This is not one huge uniform desert. The Sahara consists of many regions, each with its own rainfall levels, temperatures, plants, and wildlife. Ergs, hamadas, dry lakes and valleys, gravel plains, sand seas, dunes, volcanic mountains, and stone plateaus all form the terrain of this desert. While most of the Sahara is barren, the desert does support a mix of wildlife, including oryx, gazelle, wild asses, baboons, hyenas, sand foxes, and more than 300 species of bird. There are also around 4 million people that dwell in the Sahara, mostly in Mauritania, Western Sahara, Algeria, Libya, and Egypt. This vast life and diverse cultures all come together in one desert.

From riding a camel and luxury glamping in Morocco to sailing down the Nile in Egypt, there are many ways to experience the Sahara. But let me suggest a visit to one of the most unusual parts, White Desert National Park in Egypt. The White Desert, a small section of Egypt’s vast Western Desert (in turn part of the Sahara), is known for some of the country’s rarest and most incredible geological formations. It has brilliant white sands and impressive chalk rock formations, some looking like large mushrooms, carved out by the wind over millions of years.

The Sahara may be Africa’s most famous desert. That can tend to mean that the Kalahari, located in the continent’s south, gets relatively little attention. It may not be as expansive or as well-known as its northern cousin, but the Kalahari is impressive in its own right.

The word Kalahari comes from the Tswana words Kgala, meaning great thirst, and Kgalagadi, meaning waterless place. In truth, only parts of the Kalahari can be classified as a “true desert” (receiving less than 10 inches of rain per year). The Kalahari’s annual precipitation (4 to 20 inches) allows for the growth of grasses, thorny shrubs, and acacia trees. The Okavango River runs through the Kalahari, and other non-permanent water sources appear during the rainy season. Because of this access to water, the Kalahari is home to a variety of wildlife, including lions, brown hyenas, meerkats, antelopes, bat-eared foxes, and birds and reptiles. Much of the desert is part of Botswana’s Central Kalahari Game Reserve.

There are very few places where tourists can spend time with San Bushmen, learning about their traditional lifestyle and culture, and the Kalahari is one of them.

At less than half the size of the Kalahari, let’s examine South Africa’s Karoo. This is a semi-desert, a vast ancient seabed that straddles the midriff of the country. Karoo is a bushman word for dry place, and this desert is known for its low rainfall (around 10 inches annually) and its extremes of heat and cold. Historically the dry and treacherous Karoo provided an almost impenetrable barrier to settlers attempting to move inland from Cape Town.

The Karoo of today is still an arid region with little rainfall and high temperatures. However, an extensive reserve of underground water has been discovered, making farming and livestock-raising possible. Sheep thrive on the assorted succulents, low scrub bush, and grassland, though each sheep requires about 10 acres of grazing to sustain itself.

Two hundred seventy miles from Cape Town, the Karoo is home to some of South Africa’s more creative people; novelists, artists, musicians, sculptors, beer brewers, internet whiz-kids, boutique hoteliers, dynamic young farmers, and eccentrics. If that is your scene, then you might want to check out the AfrikaBurn festival, which features art, costume, performance, music, mutant vehicles, and more. The festival takes place annually in April.

The Danakil Desert stretches across northeastern Ethiopia, the coast of southern Eritrea, and northwestern Djibouti. This desert is one of the most extreme environments in Africa, with lava lakes, volcanoes, hot springs, geysers, and some impressive multi-colored salt lakes. Less than one inch of rainfall is recorded here each year, and the Danakil Desert is one of the lowest, driest, and hottest places on earth, with temperatures soaring to 122 degrees Fahrenheit. The Danakil Desert is nearly completely uninhabited, except for a few Afar people engaged in desert salt mining.

A visit to the Danakil Depression is a must if you are in Ethiopia. This is a surreal landscape of vibrant colors, boiling hot waters, choking wafts of sulfurous gases, frequent earth tremors, and several active volcanoes.

Located in northern Kenya, close to the border of Ethiopia, the Chalbi desert is one of the hottest and most arid places in Kenya. The name comes from the Gabbra dialect, for “bare and salty,” which seems particularly appropriate given that this vast bleached stretch of earth was once part of an extensive lake. The basin occasionally fills with shallow water during heavy rains, and fossilized remains of snail shells and fish vertebrae can be found.

If traveling into the Chalbi Desert, prepare yourself for an eerie landscape of frozen, rocky lava flows, cracked earth, sand, dried clay, and white salt. Even in this desolate location, though, you may see, in the distance, the outlines of ostriches, zebras, oryx, and other desert-adapted animals. At the northern edge of the desert are oases of palm trees, attracting sand grouse, guinea fowls, and other birds. The Gabra people also use the oases to water their camels.

While the Sahara is the largest desert in Africa, the Namib is considered the oldest at 80 million years. This is quite possibly the most photographed desert in Africa, with some of the highest dunes on the planet (over 950 feet tall). The Namib stretches along the Atlantic coast of Southern Africa and merges with the Kalahari Desert in the south.

The climate here is extremely arid. The dry Namib winds meet the cold Atlantic Ocean current, forming dense fog. This fog is the main water source for the desert’s plants and animals. The desert houses a variety of animals; jackals, hyenas, gemsboks, a variety of lizards and snakes, and desert-adapted elephants that can go days without water. One of the Namib’s most unusual sights is the Welwitschia, a bizarre-looking plant that grows two long leaves, continuously, throughout its lifetime. It is believed Welwitschias can grow for 1,000 years or more.

A visit to the old diamond mining ghost town of Kolmanskop should be on your itinerary if you visit the Namib Desert.

Guban is the Somali word for “burnt land” and is the Indigenous name for northwestern Somaliland, and the Guban Desert is a small coastal desert found here. This sandy, low-lying (less than 330 feet above sea level) desert plain on the coast of the Gulf of Aden is characterized by high temperatures and humidity, little rainfall (about 2 inches annually), and sparse vegetation. The plain is traversed by a system of shallow seasonal streams and is populated mostly by the Dir and Isaaq clans, who raise their camels and goats outside of the Guban, near-permanent wells in the Galgodon Highlands.

Pre-civil war Somalia was a growing tourist spot, but it seems unlikely that many tourists will venture here in the near future.

The Nyiri Desert lies in southern Kenya between Amboseli, Tsavo West, and Nairobi National Parks, not far from the border with Tanzania. The desert is in the rain-shadow of Mount Kilimanjaro, which contributes to its extremely low rainfall. There are, however, several large springs that support wildlife, including elephant, giraffe, rhinoceros, lion, and leopard.

Parts of this desert have dense growths of small trees, many of them thorny and some of them poisonous. During the brief rainy season, these trees have green leaves and flowers, but in the dry season, they are bare and entwined by creepers and prickly euphorbias. Baobab trees are found in the Nyiri desert, some as old as 2,000 years, their gray trunks often measuring as much as 10 feet in diameter.

Take the opportunity while you are in the area to climb Kilimanjaro.

The Grand Bara and Petit Bara are the remains of dried-up lake beds. They form vast arid plains in the center of Djibouti. The desert is flat and infertile, with no bushes or trees. In spite of this, several species of mammals have adapted to live in the region, including dik-dik, gerenuk, and oryx.

Midway between Senegal’s capital, Dakar, and the colonial city of Saint-Louis, the Lompoul Desert is 7 square miles of rolling orange sand dunes beneath a cloudless sky. This is Africa’s smallest desert. Easy access makes this desert a popular tourist destination, with visitors coming to admire the orange sand dunes reminiscent of the Sahara and Namib deserts.

A music festival started in 2009 named Festival du Sahel is held in the desert every year.

So there you have my countdown of Africa’s ten unique deserts, so pack your sunscreen and water bottle and let’s get exploring! 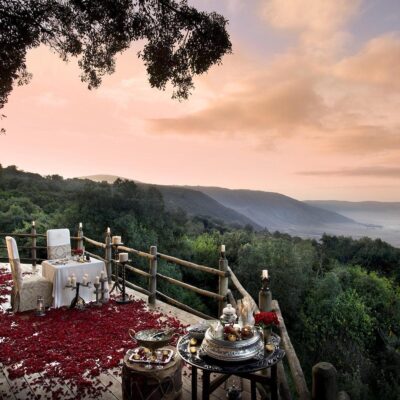