With so many islands to choose from, it’s often thought that to enjoy a Greek island experience one has to travel far from Athens by plane. This is not, however, necessarily true.

The Saronic Islands lie in the Aegean Sea, known as the Saronic Gulf, between Athens and the northeast coast of the Peloponnese. A cluster of smaller and lesser-known islands to the international tourist, they’re easily reached by ferry from the Port of Piraeus in sometimes less than an hour, making them perfect as a day trip or even weekend destination, and many Athenians have second homes there.

Once you’ve experienced the best things to see and do in Athens and the best food to try, come with me as I explore the Saronic Islands and more to showcase the best island day trips for you. Usually the best time to go is in the summer, yet despite the islands not being as touristy as other popular Greek islands, expect them to be busier at this time of year. For good weather that will allow you to take advantage of the variety of things to do, spring and fall are good, too.

If you’re considering a visit to any island that’s recommended for hiking, note that spring and fall are better times for your visit, and hikes on these islands can be quite strenuous. Always seek local advice before setting out.

We start with Salamis, the nearest island to Athens at just 12 miles away from the small Port of Perama, very near the main Athenian Port of Piraeus.

It’s often overlooked as a destination as it has a heavy shipbuilding industrial past, not a glitzy appeal — but it shouldn’t be. There are many nature walks to be had, and you’re bound to stumble across ancient antiquities, from the signposted monument of Kolones — a circular 4th-century stone funeral monument — to small stones with no indication of what they could be.

The fish market in Salamina, the island’s chief city, is an interesting place to witness local life, whereas the local Archaeological Museum — housed in a beautiful building that was the old elementary school — showcases Salamina’s historical past.

Although much of the island’s architecture has been replaced with new apartment blocks, the blue-framed, whitewashed house belonging to the famous Greek poet Angelos Sikelinos nestled by the sea is indicative of its past, and a great place to watch the sunset.

Pro Tip: Travel by car ferry (which operates every 15 minutes) from Perama on the mainland to Salamis. Journey time is 15 minutes.

Poros’s harbor is what will draw your eye initially to the island as you sail in. Poros Town is built amphitheatrically around the port — curved and rising from the ground up, surrounded by lush green pine forests.

The aesthetically pleasing neoclassical style buildings of the town are an attraction in themselves, as is the Clock Tower sitting atop a rocky outcrop overlooking the town and surrounding Saronic Gulf. It’s the local equivalent of Big Ben and a good place to take sunset pictures.

Despite its small size (19 square miles), Poros offers several small sandy beaches to relax on, but if history is your thing, you’ll appreciate the smattering of churches across the island, many with ancient frescos and relics, the most visited being the Monastery of Zoodochos Pigis — which also served as an orphanage to children born of men fighting the Greek Revolution of 1821.

Famed American novelist Henry Miller was moved upon seeing Poros when he visited in 1939, stating, “Coming into Poros gives the illusion of the deep dream. Suddenly the land converges on all sides and the boat is squeezed into a narrow strait from which there is no egress.” One could maintain that not much has changed since then.

Pro Tip: It takes a little longer to reach Poros — 2.5 hours by slow ferry from Port of Piraeus in Athens, or via hydrofoil in roughly an hour.

From pebbly beaches — one at the fishing village of Souvala in the north of the island with thermal hot springs that help rheumatic and dermatological problems — to the 500 B.C. Doric Temple of Aphaia Athena which, along with the Parthenon of Athens and Temple of Apollo at Delphi, makes up part of the Holy Triangle of Antiquity, to the Greek Orthodox Monastery of Nektarios, one of the largest in the Balkan region, much awaits you when you come to the Saronic island of Aegina.

Greeks and foreign tourists alike come to Aegina for day trips and weekend breaks and its lack of all-inclusive resorts makes it a popular destination for relaxing, sightseeing, and drinking a coffee along the waterfront.

With ancient sites, relaxing coves, and picturesque seaside villages, Aegina is a good choice for an island day trip from Athens.

Pro Tip: Both slow and fast ferries depart for Aegina almost every hour, and the journey time is between 30 minutes and one hour depending on which one you take.

Aegina’s smaller neighbor, Agistri is only 10 minutes from its big sister, and despite the fact it’s only 5 square miles and has just over 1,100 permanent residents spread out across its four villages, Agistri makes a perfect quiet island day trip.

As you enter the Port of Skala, the small blue-domed church of Agioi Anargyroi sits at the harbor’s edge ready to welcome you — it’s the first thing you’ll notice about Agistri. Skala also has a clean, organized beach with sunbeds and umbrellas, making it a popular spot to hop off the ferry and spend the day relaxing before taking the evening ferry back to Athens.

If you’re keen to explore more of the island, the beaches are served by a small bus service that regularly circles around. Or walk along the coastal road to find a selection of tavernas and restaurants all serving fresh fish, plus cafes and beach bars.

Agistri’s allure is the wonderful natural surroundings of pine forests and views of the Peloponnese. For a quiet trip and a chance to spend time on the beach during a day away from the city, you can’t go wrong with this tiny Saronic island.

Pro Tip: There are regular connections from the Port of Piraeus in Athens with journey times of 1 to 2 hours depending on which ferry service you take.

Known as the Jewel of the Saronics, Hydra is possibly one of the most popular islands to visit on a day trip from Athens. It’s famous for not allowing any motorized vehicles on the island — except the fire and refuse trucks.

It’s not so popular for its beaches, but there are plenty of good swimming platforms and rocks to swim from.

Its main pull is the upmarket harbor with several boutique shops and small hotels, plus a good selection of places to eat and drink. The harbor’s been rebuilt to resemble the architecture of its heyday in the 1800s when it was ruled by the Venetians, and you don’t need to have a vast knowledge of architecture to appreciate the uniqueness of the houses and mansions here.

Due to its relaxed vibe and the fact it’s so aesthetically pleasing, Hydra has attracted many artists, both Greek and international — the most famous being the late Leonard Cohen who bought a home there and penned “Bird on a Wire.”

For a sophisticated Greek island day trip, Hydra is definitely the one you should choose.

Pro Tip: High-speed services to Hydra operate from the Port of Piraeus, and there are about five a day with journey times of just under 2 hours.

With its elegant restored mansions dating to the Venetian era, Spetses has a distinctly vintage feel to it.

The main port of Dapia has several upmarket cafes and bars to relax in, or if it’s swimming you’re after, a visit to the secluded sandy beaches of Agia Marina or Agia Paraskevi is a must. Reach these beaches either by car or by taking the inter-island bus service.

Walking and hiking along the old paths that cut across the island side to side past old chapels and small settlements is another popular activity, especially in the spring and fall when the weather’s cooler.

Spetses is a perfect place for downtime, to come and relax and just be.

Pro Tip: The high-speed ferry from Piraeus takes about 3 hours and about five ferries run each day.

Lastly, we look at the Greek island of Kea. Though not strictly in the Saronic chain of islands, it is still possible to spend a day here.

Also called Tzia, the island is a Cycladic one with houses and churches and traditional farmhouses in earthy tones, not the blue and white of the other Cycladic islands.

Nature lovers will love it here as there are several rare plant species as well as wild birds and reptiles.

The capital is Ioulida, a place that bans cars, and the Medieval castle standing guard over the quaint village makes for an interesting visit.

Most of Kea’s beaches are sandy, small, and secluded, so you won‘t have to worry about overcrowding. Fans of walking and hiking will enjoy the inland paths through archaeological ruins such as the Stone Lion, which, according to mythology, was sent down by the jealous gods to ravage the beauty of the island.

Pro Tip: To get to Kea/Tzia, you take a one-hour ferry from the Port of Lavrion, located just over an hour from the center of Athens. For this reason, an overnight stay is well worth it on this beautiful, verdant island.

If you’re short on time, there is a One Day Cruise that allows you to take in three Greek islands — Hydra, Poros, and Aegina — in one day, and the price includes lunch on board plus Greek music. 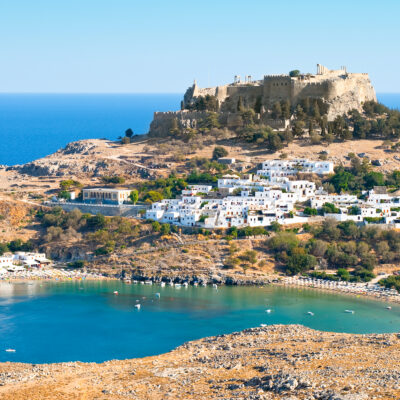