At first glance, you wouldn’t think there would be many distinctions between the South Rim and the North Rim of the Grand Canyon. After all, they both look down into the massive chasm of the canyon, they lie just 10 miles apart “as the condor flies,” and they’re both parts of Arizona’s Grand Canyon National Park.

But considering that getting from one side to the other involves either a difficult 21- to 24-mile rim-to-rim hike or a 4-to-5-hour drive, the two rims can feel eons apart — both in distance and in atmosphere.

I’ve visited both rims of the Grand Canyon numerous times and have done both the arduous rim-to-rim hike and the long car drive between the two. Over the years, I have come to love the two rims for their distinguishing characteristics, including the North Rim’s rustic forest atmosphere and opportunities for solitude and the South Rim’s big iconic views and countless tourist amenities.

Here are nine of the major differences between the Grand Canyon’s North and South Rims.

There’s no question that the South Rim is the most accessible of the park rims. Located just over an hour from the Interstate 40 town of Williams, or about an hour and a half from the mountain town of Flagstaff, the South Rim is an easy day trip from either.

On the other hand, the North Rim is a lengthy trek from virtually any community — more than three hours from Flagstaff, nearly six hours from Phoenix, and four-and-a-half hours from Las Vegas. And driving between the two rims is no easy feat either, taking between four and five hours over somewhat remote roads.

Pro Tip: The North Rim can also be accessed from the Utah side and combined with a visit to that state’s spectacular Zion and Bryce Canyon National Parks. From Kanab, Utah, the North Rim is about an hour and 40-minute drive away.

Also contributing to the North Rim’s limited accessibility is its visitation schedule. With an elevation of nearly 8,300 feet, the North Rim’s main road is closed from late October to mid-May each year due to heavy snowfall, and the park amenities are open from May 15 to October 15.

The South Rim, which is about 1,000 feet lower in elevation, gets some winter snow, but the park is typically open year-round.

Because of the higher elevation at the North Rim, visitors should expect cool temperatures, even in the summer. High temperatures average in the 70-degree F range in June, July, and August, while May and September are in the 60s, and October is in the 50s. Nights can be chilly all year long, and visitors should remember to bring a jacket and sturdy shoes for the cooler days and evenings.

Pro Tip: Remember that if you’re heading out on a hike below the rim of the Grand Canyon from either rim, the temperature will rise as you go down. Phantom Ranch at the bottom of the canyon is at about 2,460 feet elevation, and average highs climb above 100 degrees throughout the summer months.

The North Rim of the canyon is known as the quiet side for a reason. Typically, the national park gets about 6 million visitors a year (the total was down considerably in 2020 due to the COVID-19 pandemic), and the Grand Canyon’s website notes that most of the visitors see the canyon from their car at overlooks along the South Rim.

A significantly smaller number of people (estimated to be about 10 percent of the total) see the canyon from the North Rim — a statistic that has been confirmed by my visits to both rims on the same busy fall weekend, when crowds tended to be fairly sparse at North Rim but heavy on the South Rim.

If your plan is to stay a night or two in the national park, you will have many more choices in the South Rim. Within the park itself, accommodations range from the historic El Tovar Hotel to more basic lodging in the Yavapai Lodge to camping at the two park campgrounds. And within minutes of the national park entrance is the town of Tusayan, where a range of chain hotels, such as the Best Western Canyon Squire Inn and the Holiday Inn Express, are available.

At the North Rim, accommodations are significantly more limited. Within the park, there is only the Grand Canyon Lodge and the North Rim Campground. The nearby towns of Fredonia and Page, Arizona, and Kanab, Utah, also offer lodging within a couple of hours’ drive.

Pro Tip: Regardless of the rim, hotels and campgrounds tend to fill up quickly. The Grand Canyon National Park Lodges website reports that lodging reservations are taken up to 13 months in advance. More information is available on the reservation site here.

Similar to the hotel scene, dining options are much more abundant at the South Rim than the North. Typically, the South Rim offers a range of restaurants for fancy sit-down dinners, cafeteria-style meals, and markets for snacks and conveniences. A list of options is available here.

Many fast-food and restaurant options are also available right outside the South Rim entrance in Tusayan.

The North Rim offers a more limited range of dining options including the Grand Canyon Lodge Dining Room, the Roughriders Saloon, the Deli in the Pines, and the General Store.

If you’re looking for the famous views of the Grand Canyon, the South Rim is where you’ll find iconic sights like Mather Point, Grandview, and the Desert View Watchtower. The South Rim is also the place to begin day hikes along the South Kaibab Trail to breathtakingly beautiful spots like Ooh Aah Point, Cedar Ridge, and Skeleton Point.

Of course, the North Rim offers spectacular views as well, such as Cape Royal and Point Imperial, but they are fewer in number and tend to be less recognizable.

Pro Tip: Be sure to check the availability of the Desert View facilities before heading out. Because of the COVID-19 pandemic, many of the facilities along Desert View have been temporarily closed in 2020 and 2021.

While the North Rim is mostly about scenic drives and long walks or mountain-bike rides along trails near the rim, the South Rim offers a range of recreational opportunities.

One of the most popular South Rim activities is to rent a bike and ride the paved Rim Trail (described in this PDF) that follows the edge of the canyon and offers splendid views along the way. There is also the nearby town of Tusayan, where visitors can book a helicopter or airplane ride over the canyon or take in an IMAX movie.

By virtue of their levels of accessibility, the North and South Rims seem to attract travelers with different agendas.

Because the South Rim is easy to get to from Interstate 40, many of its visitors are there for a quick drive-through and a photo opp. In fact, park surveys have shown that the vast majority of visitors to the South Rim spend just a few hours there, driving the scenic road and stopping at a few of the convenient overlooks.

Visitors to the North Rim tend to be more interested in at least a night’s stay, and often longer. I have noticed that people appear to take their time on the North Rim, lounging in the deck chairs at the lodge to watch the sunset or pausing for the views on the Bright Angel Point Trail.

The North Rim also attracts many of the day-tripping rim-to-rim hikers, who are intent on serious rest and relaxation — either before or after their grueling hike across the canyon.

Overall, if you want the total Grand Canyon package, it’s best to visit both rims. But if you have to choose between the two, I recommend that first-time visitors focus on the South Rim for the numerous overlooks and variety of experiences. Those who are on a repeat visit to the area should definitely check out the North Rim for its secluded feel and its opportunity for a classic national park visit. Also, if you’re visiting Arizona between October 15 and May 15, your only option is the South Rim; the North Rim closes down each year for the cold-weather months. 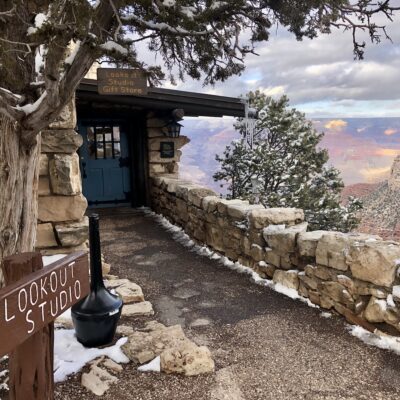 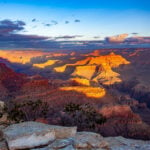 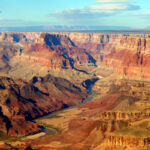 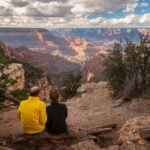