Most people heading out on an African safari will have a fairly traditional list of animals in mind that they are hoping to see. But if you dig a little deeper, search a little harder, look a little longer, maybe you will spot something a little different. Finding one of these not-often-seen animals can really make your safari extra special.

The black rhino is the rarer and smaller of Africa’s two rhino species, though it is still a rather imposing animal, with its tank-like body and two lethal horns and can still grow to an impressive height of 6 feet at the shoulder — which isn’t small at all! Once found across Southern and East Africa, the black rhino is now considered critically endangered, with fewer than 5,000 left in the wild.

It is commonly known that rhinos are hunted for their horns. Traditionally used for ceremonial dagger handles in the Middle East (a trade banned in 1982), or in traditional Asian medicine, as a “remedy” for a variety of ailments. Yet, there is nothing magical about the composition of rhino horn; it is almost entirely comprised of keratin, the same as our fingernails and hair. Despite this, a kilo of rhino horn trades at around $25,000 per pound on the black market. Having two horns that can grow as much as 3 inches a year and have been known to grow to 5 feet in length, the black rhino has long been a target for hunters and poachers.

Black rhinos occur in only a handful of protected areas in east and southern Africa. My most memorable black rhino encounters have been in Zambia’s North Luangwa National Park, where the North Luangwa Conservation Programme, in 2003, reintroduced black rhinos to the park. I was lucky enough to see the first black rhinos in their holding enclosure shortly before they were released, and in the intervening years, I have been back many times to follow their progress. Though a success story for black rhino reintroduction, North Luangwa is not the best place to go to see these fabulous creatures in the wild. The roads are few, the bush is thick, and some parts of the park are all but unreachable for visitors. A more recommended place to see the black rhino is Etosha National Park in Namibia, another rhino conservation success story. It has a thriving black rhino population much more accessible to visitors.

Desert elephants or desert-adapted elephants are not a distinct species of elephant but are African bush elephants that have made their homes in the Namib and Sahara deserts in Africa. Desert-dwelling elephants were once more widespread in Africa but are now only found in Namibia and Mali. They tend to migrate from one waterhole to another, following traditional routes that depend on the seasonal availability of food and water.

While they may not be a separate species or subspecies, desert elephants are uniquely adapted to their arid environments. They have thinner bodies and wider feet than other African Elephants, allowing them to walk with more ease across the very soft desert sand, an adaptation that is useful when you consider that these elephants have been known to travel up to 125 miles in search of water. Desert elephants also have slightly longer trunks than other African elephants, allowing them to dig down into the sand in search of water underground.

Desert-adapted elephants are found in only two locations in the world: in Mali and the northern reaches of Namibia. The best place to go is Namibia; you can find them along the dry riverbeds of Kaololand and Damaraland.

The pangolin is a scaly, ant-eating mammal and a secretive, nocturnal, and elusive creature. It is also sadly the most globally trafficked mammal. Pangolin scales are used in traditional Chinese and African medicines, and their meat is prized in some areas as a delicacy. Growing demand for these seemingly mythical creatures has placed it on a list heading toward extinction.

A pangolin’s other distinguishing feature is its incredible tongue, which, when fully extended, can be up to 16 inches, longer than its entire body! A sticky saliva coats their tongues, helping with catching bugs, which is just as well as a single pangolin can consume more than 70 million insects a year!

Pangolins are hard to spot in the wild because they are both nocturnal and rare. They are one of the trickiest animals to see on safari. Despite years of looking, I have only once seen a pangolin, and it was one that had been rescued from poachers and was being released back into the wild in the Kafue National Park, Zambia. Though tricky to find, the best place to see a pangolin in the wild is in its natural habitat, and the Serengeti National Park in Tanzania is a good place to start.

For some insight into the devastating trade in pangolins, watch Eye of the Pangolin on YouTube. Or, for a more lighthearted look at a pangolin dining, check out this video from National Geographic.

Many of you may be familiar with the movie, Gorillas in the Mist, about American wildlife expert Dian Fossey’s time studying and protecting the Mountain gorillas of Rwanda and Uganda. Many of you may be inspired to follow in her footsteps and see these fascinating creatures for yourselves.

Mountain gorillas are a subspecies of the eastern gorilla. They are listed as endangered, with only about 1,063 still left in the wild. Around half of these are found in the Virunga Mountains, a range of extinct volcanoes that borders the Democratic Republic of Congo, Rwanda, and Uganda. The remaining population can be found in the Bwindi Impenetrable National Park in Uganda.

As their name implies, mountain gorillas live in forests high in the mountains at elevations of up to 13,000 feet. They have thick fur to help them survive in a habitat where temperatures often drop below freezing. As humans have moved more and more into the gorillas’ territory, the gorillas have been pushed farther up into the mountains, forcing them to endure dangerous and sometimes deadly conditions.

Given their location, seeing mountain gorillas in the wild is no small feat and entails some strenuous and lengthy hiking in some very challenging conditions. Not a trip for the faint-hearted.

Netflix’s Virunga is an Oscar-nominated true story about the rangers who risk their lives to save endangered mountain gorillas.

Bat-eared foxes are one of Africa’s most remarkable species and are a special sight on an African safari. These are, in fact, some of my favorite African animals, and I can happily spend hours in their company.

While the body of this diminutive fox may be small, their ears grow to over 5 inches tall! Indeed their ears can make up a third of a bat-eared fox’s height! Of course, enormous ears give the bat-eared fox an incredible sense of hearing. Not only do these foxes pick up the sounds of the savannah, but they can also hear insects moving underground. Bat-eared foxes are nocturnal, spending most of the day resting in burrows before emerging after dark to forage and hunt.

Classed as a predator, bat-eared foxes are much too small to hunt antelope or other mammals, their dining preference being instead insects. Termites make up 70 percent of a bat-eared fox’s diet, with the addition of a variety of other tasty treats, including dung beetles, grasshoppers, scorpions, millipedes, and spiders. To catch its dinner, the bat-eared fox forages, with its ears pointed towards the ground, until it hears its prey moving beneath the surface. When they sense dinner is near, the fox will stop, listen, and dig!

Although these small predators are common in several African countries, their small size and nocturnal habits are not conducive to easy safari sightings. My favorite place to see bat-eared fox is the Central Kalahari Game Reserve in Botswana, where I’ve seen many, both adults and their tiny kits (babies). Late afternoon and nighttime game drives are a good activity if you wish to find them. One good thing to remember is that bat-eared foxes are highly social, so if you spot one, keep your eye out for more!

Africa is an incredible continent, with a wide and varied array of fascinating wildlife. It’s worth taking the time to really explore, as you never know what wonders you may find and what encounters you may have that you’ll treasure for a lifetime. 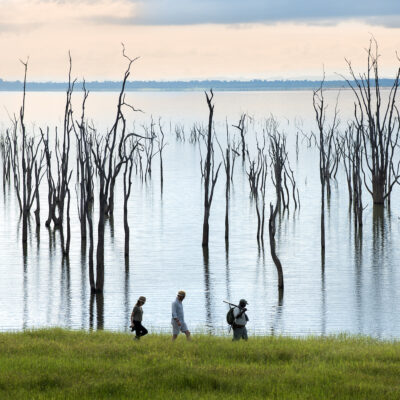 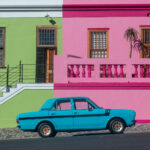 Africa9 Most Colorful Cities In Africa 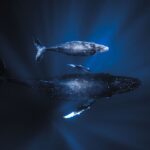 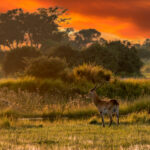 AfricaTop 9 Destinations In Africa For A First-Time Visitor
Feeling Inspired? Book This Trip