How To Spend A Long Weekend In Palo Duro Canyon

As my friend Tim and I drove south from Amarillo, Texas, toward Palo Duro Canyon State Park in the flat panhandle of Texas, I began to doubt that the second-largest canyon in the United States actually existed.

Located 25 miles south of Amarillo and only 14 miles from Canyon, Texas, this often overlooked canyon seems to pop out of nowhere. The drive through the flat, scrubby panhandle terrain gave no hint at the fact that a canyon that dips 800 feet down in places even exists out here in the dusty west.

“I think they’re fooling us,” I joked. “There’s no way there is a canyon out here.”

When Palo Duro Canyon does come into view, it’s sudden and shocking. One minute, you’re staring at plains; the next, the earth opens up into a wide panorama of colors, canyons, cliff walls, and knee-shaking vistas.

Second in size only to the Grand Canyon in Arizona, Palo Duro Canyon was formed by millions of years of relentless Texas winds and water erosion from the unassuming Prairie Dog Town Fork of the Red River.

Nicknamed “The Grand Canyon of Texas” because of its size, stunning geological features, multicolored layers of rock, hoodoos, and steep mesa walls, Palo Duro Canyon is also the second-largest state park in the state parks system, and it features 30 miles of hiking, biking, and equestrian trails (PDF).

As the second-largest canyon system in the United States, Palo Duro Canyon is 120 miles long and 20 miles wide. At up to 800 feet deep, the canyon is filled with colors from 250 million years of geological layers.

According to Texas State Parks, Palo Duro Canyon has been inhabited for about 12,000 years, starting with the Clovis and Folsom peoples, who hunted herds of mammoth and giant bison.

The Apache, Comanche, and Kiowa also called Palo Duro Canyon home, but the canyon is also the site of one of the darkest moments for Native Americans.

The Red River War between the U.S. Army and southern Plains Indians lasted from June 1874 to spring 1875, and on September 28, 1874, the 4th U.S. Cavalry launched a surprise attack at dawn on a camp of Comanches, Kiowas, and Cheyennes.

The tribes fled, but the U.S. forces shot and killed their 1,400 ponies and burned all the winter supplies, leaving the families no choice but to surrender and return to the reservation.

In 1887, the partners divided up the land, and in 1933, Texas bought the land for the park. The Civilian Conservation Corps (CCC) spent five years building the infrastructure of the park, and today, that legacy can be seen in what is now the visitor center, the cabins on the rim and canyon floor, and the trails. The 28,000-acre park opened in 1934.

Things To Do In Palo Duro Canyon

Many visitors to Palo Duro Canyon State Park can spend days upon days exploring the canyon by foot, mountain bike, horse, or car. With more than 30 miles of hiking, biking, and equestrian trails, outdoor adventurers can stay busy studying nature, birdwatching, hiking, or just taking in the scenery during a day trip from Amarillo.

Horseback riding is a popular activity at the canyon, and the Old West Stables offer guided horseback trail rides from March to November. The equestrian area at Palo Duro Canyon State Park has about 1,500 acres, and many of the trails in the equestrian area are strictly for horses for a leisurely getaway. The park has other horseback trails open to all users, including the Juniper Cliffside Trail (about six miles round-trip) and the Lighthouse Trail (about six miles round-trip).

The equestrian area has six primitive campsites, a corral and old west stables, and water nearby. You must walk or drive to a nearby camping area for restrooms and showers.

Geocaching is a treasure-hunting game where participants use a GPS to find (or hide) “geocache” containers, which contain small treasures and logbooks for participants to sign. Palo Duro Canyon has several geocaching sites to discover.

Mountain Biking In The “Grand Canyon Of Texas”

Paved roads to the visitor center in the second-largest canyon in the U.S. can also be reached by bicycle, though you should be cautious of cars and other traffic at Palo Duro Canyon State Park.

Learn About History And Art

For history and art lovers, Palo Duro Canyon State Park has a wealth of both.

The Canyon Gallery, which is operated by the Partners in Palo Duro Canyon Foundation, was built out of native stone in 1933 by the CCC and remains one of the most impressive buildings at Palo Duro State Park.

With soaring windows that give an impressive view of the canyon and its rock formations, the Canyon Gallery is full of nature exhibits, archeological discoveries of west Texas, and Southwest art. It’s also a great place to learn about the history of the “The Texas Grand Canyon” and the impressive geology that makes this Texas Panhandle park so unique.

For more souvenirs, camping supplies, and ready-to-eat food, visit the Palo Duro Trading Post. The trading post is also the only gas station and fast-casual restaurant in the park.

Hit The Trails At Palo Duro

By far, the most popular activity in the canyon is hiking. The Texas Parks and Wildlife trails range from flat and easy to steep and rugged, but even a hike along the paved roads gives countless opportunities to see the towering mesas and the diverse wildlife, like coyotes, rabbits, deer, and the nimble, regal aoudads.

The “Grand Canyon of Texas” has 16 marked hiking trails ranging from easy, half-mile paths to longer trails that can connect to one another through winding rock formations. The hiking trails lead to notable landmarks like ancient landslides, cavern-like areas, old Civilian Conservation Corps buildings, and wildlife viewing blinds.

Even a day trip from Amarillo can allow you to explore all the hiking trails at this Texas state park.

A trail map can be found here (PDF).

Pro Tip: Always pack more water than you need. The canyon floor can become blistering hot, reaching 120 degrees during the warmer months, and the park ranger told us most of the first-aid emergencies are due to over-exertion and dehydration. Never begin a hike without at least a half-gallon of water per person, per hour.

Tim and I stayed at the Hackberry Campsite, one of four Palo Duro State Park campsites with water, electricity, and public restrooms. Every morning, a large flock of turkey wandered through, gobbling and showing off their plumes as we drank coffee and watched the sun rise over the canyon walls and hoodoos.

Palo Duro State Park has numerous campsites with water and electricity, tent sites, equestrian sites, and backpack camping areas. You’re close enough to Amarillo, however, if camping isn’t your style, you can find plenty of hotels in the Texas Panhandle within an hour or so.

Note: Palo Duro Canyon is open for day use from 7:30 a.m. to 10 p.m. every day, but for the foreseeable future, all guests, including annual pass holders, must purchase day passes and/or overnight reservations in advance through the Texas State Parks Reservation System.

While all the campsites seem nice, I especially liked Hackberry because of the little creek that weaves around it and the way it nestles along a cliff face. We were lucky to score the last available campsite when we visited, and although it was a bit of a hike to the restroom, I thought it had the best views in the park.

The Hackberry Campsite at Palo Duro State Park has 32 sites and is the second public campsite you’ll come across after entering the park.

The Juniper campsite is the first campground you’ll see after entering the park and passing the visitor center. Like the other campgrounds, this site has water and electricity as well as wonderful views of the west Texas landscape and rock formations. The Juniper has 18 sites with restrooms and showers nearby.

Near the end of Palo Duro Canyon is the third campground, and the largest, with 47 sites. Some of the sites can hold a 60-foot RV. Nestled on the Palo Duro Canyon floor, this campground gives easy access to the old west stables, horseback riding paths, and trails like The Lighthouse Trail.

Reserve campsites as early as possible, especially for holiday and summer weekends. If you plan to spend a lot of time in Texas and near Amarillo, consider a Texas State Park Pass, which offers unlimited visits to more than 90 state parks without paying the daily entrance fee. You can also receive discounts on camping, park store merchandise, equipment rental discounts, eligibility for other specials.

Personally, I think springtime is the best time to visit Palo Duro State Park. The weather doesn’t get as hot as it does during summertime in the Texas Panhandle, and it’s not as crowded.

On our first morning in Palo Duro Canyon, Tim and I woke just as the sun was beginning to glow to start hiking. With more than 30 miles of trails to choose from, including the Upper Comanche Trail that weaved right through our campsite (Hackberry), we ended up hiking 17 miles that first day.

The Givens, Spicer, And Lowery Trail

We started on the Givens, Spicer, and Lowery Trail, a 3.1-mile singletrack path that leads to the Red Star Ridge. The trailhead starts across the street from the Hackberry Campsite, and at about 1.5 miles, the terrain becomes less challenging and more rolling.

One of my favorite trails to hike was the CCC Trail, a rugged and steep 1.4-mile trail built by the Civilian Conservation Corps that follows the Palo Duro Canyon State Park rim near the visitor center. While not necessarily hard, the trail is fairly rugged as it leads to Goodnight Peak. It also becomes so narrow that there are steep drop-offs and views on both sides of the trail.

We tackled the challenging and steep 2.4-mile Rock Garden Trail, which connects with the 3.7-mile Rylander Fortress Cliff Trail, where we spotted herds of aoudads and even two coyotes running through the brush. The Rock Garden Trail is steep in some places, but luckily, there are plenty of places to rest and recover from the west Texas heat.

The 4.4-mile Lower Comanche Trail connects to the 3.3-mile Upper Comanche Trail for a nice hike that runs through most of Palo Duro State Park. The 2.2-mile Paseo Del Rio Trail is an easy, flat path that meanders along the river and is good for all levels of hiking. You’ll be able to see a great deal of the second-largest canyon in the United States along this hiking trail.

One of our favorite hikes was a backcountry horseback riding trail that runs approximately 1.6 miles from the equestrian area and old west stables at Palo Duro State Park. I could have sworn we hiked way more than 1.6 miles, but we also wandered off trails to picnic by a small stream, climbed upon mesas and among rock formations, and explored hidden canyons in this “Grand Canyon of Texas.” Along that backcountry trail, which can be a bit strenuous in places, we discovered petroglyphs that are not advertised anywhere but are marked by a protective fence. Needless to say, that was a surprise we didn’t expect.

Again, always bring enough water, especially during the warmer months. With extreme summer heats on the canyon floor, you can easily become overwhelmed by heat exhaustion and dehydration.

Remember, this is a wild area, and you may encounter wildlife like rattlesnakes, feral hogs, coyotes, bobcats, deer, and, if you’re lucky, the endangered Texas horned lizard.

Several members of the official State of Texas Longhorn Herd live at the park. 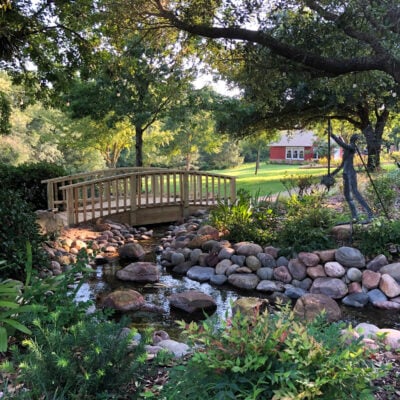 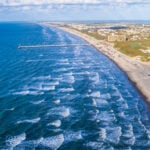 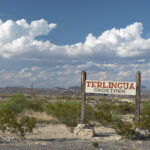