Disney Releases A Rare Look Inside The Cinderella Castle Suite

If you know someone who loves Disney princesses, you’re in for a special treat. While you can’t stay there, you can now take a virtual tour of the famed Cinderella Castle Suite.

The Cinderella Castle Suite in Magic Kingdom is the most exclusive hotel room at Walt Disney World, but it can’t be rented. Instead, the only people who stay there are contest winners or guests invited by Walt Disney World, Disney Tourist Blog explains.

The Cinderella Castle Suite didn’t have royal origins. It was first planned as a place for Walt Disney and his family to stay when visiting the park, an article on Everything Mouse explains.

However, Walt Disney died in 1966, long before Magic Kingdom opened. According to the article, when Cinderella Castle was built, the space was used for storage — and even was the office for Disney telephone operators at one time.

The transformation from humble office space to a beautiful suite wasn’t the work of a fairy godmother, but Walt Disney Imagineering, in 2006. The team decorated and upholstered the space to create a suite fit for a royal princess for the Year of a Million Dreams, Disney Tourist Blog notes.

The Year of a Million Dreams finished in 2008. Since then, Disney has occasionally chosen families to stay in the Cinderella Suite, which can sleep up to six people. A stay in the suite has also been offered as a prize in a sweepstake.

Truly Decorated For A Princess

Since the Disney Cinderella Suite was built for a princess by the Imagineering Team, it looks exactly the way you expect it to look. For example, it’s decorated in “rich golds” with “lavish materials,” including “dark wood and rich fabrics,” Everything Mouse explained.

The only way to get to Cinderella Castle Suite is by an elevator activated using a “Key to the World card,” Disney Tourist Blog said. Visitors exit the elevator and, first, step into a small marble-floored foyer, which even features a fairy tale pumpkin coach.

From there, visitors enter the suite itself, which includes a salon, bedchamber, and bathroom, which all look as if they came straight from an actual castle.

In the TikTok video, you can see a “C” above each bed in the royal bed-chamber, a WDW News Today article, which has more pictures, explained. The video points out that the “C” is for Prince Charming because it first was his castle.

The video also shows a portrait of Cinderella hanging above a majestic fireplace, as well as stained glass windows that look out onto Magic Kingdom. Other details include a “magic mirror” TV playing the original Cinderella animated film.

Even the bathroom is fit for a Disney Princess. WDW News Today notes that the bathroom has chandeliers that resemble crowns and three mosaics — each made of up to 10,000 pieces — surrounding the tub.

It’s too bad you can’t visit Cinderella Castle Suite in person, but it’s fun to watch the Disney video from the safety and comfort of your home. 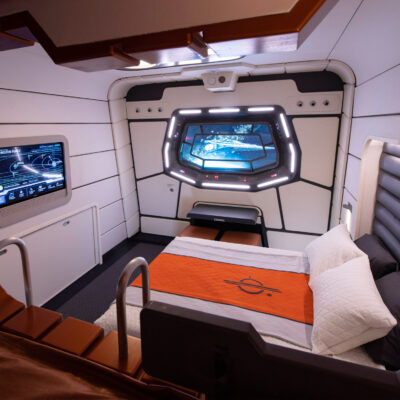 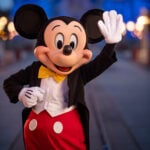 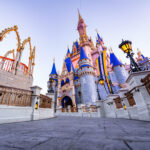 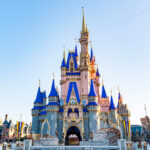