13 Of Canada’s Most Adorable Small Towns And Villages

Canada is famous for its beautiful cities. Who hasn’t heard of Vancouver, Quebec City, or Halifax? But there’s a strong case to be made for Canada’s small towns and villages, some of which are downright adorable. If you love small, cozy communities, you’ll fall in love with these 13 delightful destinations, which stretch from coast to coast to coast.

Pretty Twillingate may just be the only place in the world where locals can joke about how their “icebergs are just the tip of the iceberg” without sounding too silly. Twillingate is one of the best-positioned communities along Newfoundland’s famed “iceberg alley” — but there is much more going on here. This gorgeous fishing village has beautiful natural scenery and a good selection of museums, cultural centers, and historic buildings.

If Mahone Bay offered nothing more than its colorful houses, it would already be one of Canada’s most adorable towns. But this small community in southeast Nova Scotia has so much more. It’s famous for its trio of waterfront churches, a scene beloved by photographers. Sticking along the waterfront, you’ll also see fishing boats, small shops featuring goods from local artisans, cute cafes, and opportunities for stand-up paddleboarding and kayaking.

Sleepy Summerside, Prince Edward Island, is as relaxed as they come. The harbor-front boardwalk, Spinnaker’s Landing, is designed to look like an old fashioned fishing village, with buildings painted turquoise, pink, aqua, yellow, and orange. There, visitors will find restaurants, shops, ice cream stands, and even a theater.

Just about every legend about Goderich, Ontario, is true. Its motto is indeed “Canada’s Prettiest Town,” and it has won multiple awards in the Communities In Bloom competitions for its civic pride and beautiful gardens. However, there’s one bit of local lore that can’t be substantiated: The oft-repeated claim that Queen Elizabeth II called Goderich the prettiest town in Canada is likely just a bit of folklore, as there’s no evidence that any monarch has ever visited!

If you had to sum up what a visit to Baie-Saint-Paul, Quebec, is like, you might say that it tastes as good as it looks. This area is known for cheese, meat, berries, mushrooms, and even homemade chocolate. It’s also known as an artists’ paradise. The town is filled with art galleries (one of the highest concentrations in Canada), shops, studios, and, of course, plenty of restaurants.

Also read up on 6 Quebec Destinations That Feel Like You’re In A Hallmark Movie.

Known locally as Manitoba’s Most Beautiful Town, Neepawa has the distinction of being the recognized Lily Capital of the World, with 1,500 to 2,000 varieties of lilies grown in the area. In addition to the annual Lily Festival each July, visitors flock to Neepawa to see the Margaret Laurence Home, the historic property where the famous Canadian novelist grew up, as well as the art deco-style Roxy Theatre, which dates to 1906.

If good things come in small packages, tiny Waterton, Alberta, is bursting with greatness. This tiny town (home to just 50 or so people in winter) is built on just one square mile. But this tiny space packs a powerful punch. Located within Waterton Lakes National Park, the town boasts a spectacular natural backdrop of mountains and lakes while it’s wee town center is filled with shops and restaurants. The landscape is dominated by the Prince of Wales Hotel, which offers old fashioned luxury, incredible views, and even a full afternoon tea service.

Watrous, Saskatchewan, is a sweet small town with a unique spiritual side. At the All Saints Anglican Church, visitors can take in the splendor of 500-year-old stained glass. These precious windows came from Wiltshire, England, and represent some of the oldest stained glass in North America. For a different kind of soulful experience, the nearby Manitou Lake has a salt content rivaling the Dead Sea, and, yes, you can float in it the same way.

While in Saskatchewan, explore the Valley of 1,000 Devils on Canada’s new scenic drive.

Known as “Ukee” to locals, Ucluelet, British Columbia, boasts world-class restaurants (filled with lots of local wine,) resorts, and galleries — but it’s the scenery that steals the show. Locals love Ukee’s surfing, hiking, and gorgeous beaches. This town is as down to earth as it gets, and it feels like everyone knows one another in the pretty downtown shops and cafes. Pacific Rim National Park is nearby and adds to the area’s appeal.

A true nature lover’s destination, Fort Simpson, Northwest Territories, is situated at the confluence of the two rivers, the Mackenzie and the Liard, and there’s hardly a bad view no matter where you go. It’s a fantastic gateway destination to explore Nahanni National Park, where you can hike among alpine wildflowers or paddle some of Canada’s most challenging waters.

A fabled gold rush town that found fame in the late 1800s, Dawson City, Yukon, is still a golden destination, though modern visitors are seeking a different kind of reward. You can still pan for gold here, but most visitors prefer to take in the fun via tours, museums, and staged photo ops around the historic downtown, where local ordinances require all new buildings to comply with visual standards inspired by the 19th century.

Its name means seagulls’ nesting place in the Inuktitut language, so it comes as no surprise that Naujaat, Nunavut, is an incredible place for bird watching. There are approximately 100 species in the area. Wildlife figures prominently in local art, and Naujaat is renowned for its Inuit artists, who create sculpture in ivory, soapstone, marble, bone, and antlers. 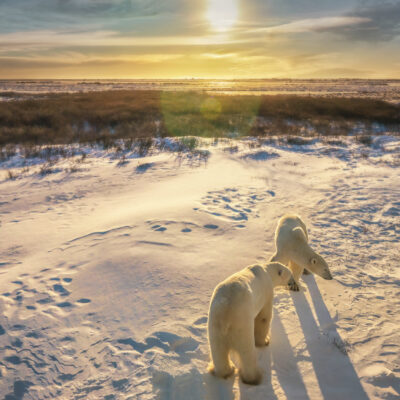