The Most Beautiful Gardens To Experience In Europe

The soft petals of roses on thorny bushes always remind me of my grandfather. After caring for residential yards and commercial landscapes as the owner of a lawn and landscaping business, he would relax by tending to the beautiful rose garden he built in his backyard. Planted around a koi pond with a gurgling waterfall were roses that bloomed in the most flawless white, softest pink, and deepest red colors I’d ever seen.

Perhaps that’s why I’ve always been drawn to beautiful gardens. Whether they feature the bright heads of crocuses emerging from the snow, the sunny bells of daffodils, or climbing vines that provide shade from the warmest summer days, well-manicured landscapes remind me of my grandfather.

On the continent that gave the world the Italian, French, and English gardens, there is no shortage of calming green spaces, lush parks, and showy flower beds, but I think these are the most beautiful gardens to experience in Europe.

Because the Boboli Gardens heavily influenced the design of many of the European gardens on this list, they are an absolute must-see in Europe. Originally designed for the Medici family, the Boboli Gardens are located directly behind the Pitti Palace, but the towering trees, wide paths, and flowing fountains have been open to the public since 1766.

Italian gardens are known for being verdant, with a focus on different shades of green flora accented with a few flowers. Well-manicured evergreen trees and bushes receive a pop of color from climbing plants like bougainvillea, jasmine, and wisteria that create shaded walkways as they wind their way around arched trellises. And perennials like lavender and rosemary fill the air with their distinct fragrances.

The Boboli Gardens also feature statues, fountains, and grottos that are just as impressive as the landscaping. While several ancient and Renaissance-era statues accent the garden, one of the most famous is the Tindaro Screpolato, a giant bronze piece that looks like a cracked plaster cast of the Statue of Liberty’s face. And when it comes to fountains, don’t miss the Fountain of Neptune or the Artichoke Fountain.

Inspired by caves, several grottos are also present in the Boboli Gardens. The most visited of these artistic architectural features is the Buontalenti Grotto, located in the far north of the garden near the entrance to the Vasari Corridor. This covered passageway connecting the Pitti Palace and the Palazzo Vecchio was originally used as a royal skywalk that allowed the Medici family to travel between their residence and government palace without having to interact with commoners.

Pro Tip: Dan Brown fans are sure to recognize Boboli Garden landmarks from his thriller Inferno. Separate the fact from the fiction by reading this article.

Built around the Luxembourg Palace in the early 1600s, the Luxembourg Gardens are located across the Seine and about a 15-minute walk from the Louvre. They were designed for the Queen of France, who was born at the Pitti Palace as Maria de’ Medici, and you can bet that the beautiful Boboli Gardens in her childhood backyard influenced the design of this green space.

Today the majestic Luxembourg Palace is home to the French Senate, and the grounds originally built for the queen include a collection of 20 marble statues that honor several of France’s queens.

While many of the beautiful European gardens on this list charge an admission fee, you can enjoy the 60-acre Luxembourg Gardens for free. So when you visit, you’ll likely witness everyday Parisians enjoying the parklike setting to its fullest — children racing miniature sailboats in the Grand Basin, artists capturing scenes on canvas, and locals relaxing on the chairs and benches that line the crushed gravel paths.

Pro Tip: If you explore the western edge of the park, keep an eye out for the 37-foot-tall replica of the Statue of Liberty in the Luxembourg Gardens. After all, America’s Lady Liberty was a gift from France.

About 30 minutes outside of Paris lies another beautiful European garden inspired by the Boboli Gardens. Covering nearly 2,000 acres northwest of the gilded chateau, the gardens at the Palace of Versailles stretch as far as the eye can see from the windows in the opulent Hall of Mirrors. No wonder King Louis XIV — also known as the Sun King — loved the gardens as much as his over-the-top palace.

Because traveling to this Paris suburb and touring the extravagant palace is already a fairly substantial time commitment, many visitors don’t spend much time in the gardens. But if you take time to walk the precisely laid paths, you’ll discover elaborate parterres, 50 fountains, a grand canal, and hundreds of statues. In fact, Versailles boasts so many statues that it’s one of the largest open-air sculpture museums in the world!

Just off the southern wing of the palace sits an impressive, high-vaulted building known as the Orangery. This long, narrow space holds more than 1,000 orange, lemon, pomegranate, palm, and other tropical trees, and its nearly 15-foot-thick stone walls and double-paned windows ensure that it’s never colder than 40 degrees, no matter how frigid the winter weather.

Pro Tip: During low season (typically November through March), there is no entrance fee to visit the gardens at Versailles.

Tucked into a bend in the River Thames, the Kew Gardens are a UNESCO World Heritage site. Touring this 300-acre site about 20 minutes west of downtown London feels like a whirlwind trip around the globe.

Start close to the equator by visiting the tropical rainforest at the Palm House, where the hot humid air allows tropical fruits like papayas and bananas to flourish. Then be mesmerized by pitcher plants that happily feast on ants, flies, and wasps at the Princess of Wales Conservatory. Soar to new heights in the Alpine House, featuring plants that thrive at high altitudes, and then remain above it all by strolling along the Treetop Walkway that lets you get closer to some of the 14,000 trees at Kew Gardens. Enjoy a few moments of zen in the Japanese gardens with stone lanterns, soothing waterfalls, and Oriental architecture.

And last — but certainly not least — explore the Temperate House. Filled with more than 10,000 plants from around the world, this massive glass structure is the world’s largest Victorian glasshouse and the iconic symbol of Kew Gardens.

Visiting Monet’s home and gardens feels like stepping into an Impressionist painting. After touring the adorable French countryside home, you’ll find walking along the crushed gravel path in Monet’s 2-acre, walled garden to be absolutely mesmerizing.

The celebrated artist spent several decades carefully selecting and planting the plants, flowers, and trees that slowly morph with the seasons. As winter melts into spring, daffodils and tulips usher in the first colors of the new year, and apricot and cherry trees explode with delicate pink buds. As the season progresses, flowering vines climb the large green metallic arches installed by Monet, preparing to provide shade as summer approaches. Bright poppies soon take center stage, while chrysanthemums wait in the wings and fragrant roses prepare for the garden’s final act of the year.

But the lush, vibrant, and fragrant flower garden surrounding Monet’s house is nothing compared with his water garden.

Emerging on the other side of a tunnel that burrows beneath chemin du roy, a thick, bamboo-lined path leads to Monet’s pride and joy. It took the painter more than 20 years to create the water garden filled with water lilies and bisected by a hunter green Japanese footbridge.

Monet’s house and gardens are open seasonally from March through October. And since the village of Giverny is only about an hour northwest of the French capital, it’s easy to visit Monet’s beautiful gardens on a day trip from Paris.

In contrast to the elaborate gardens that surround Renaissance-era castles and the world-renowned water lilies at Monet’s home in Giverny, Keukenhof is a more modern European garden, established to showcase the beauty of Dutch bulbs. A guild of growers planted acres of tulips, daffodils, hyacinths, and other flowers on the grounds surrounding Castle Keukenhof and opened it to the public for the first time in the spring of 1950.

Located about 30 minutes from Amsterdam, Keukenhof is one of the world’s largest flower gardens. It is open to the public for just eight weeks each spring when millions of bulbs planted the previous winter bloom in a coordinated fashion to provide constant color throughout the season.

In addition to exploring the 80-acre park, visitors can rent bicycles near the main entrance to explore the surrounding area. While you should absolutely not walk into the tulip fields, the ribbons of color stretching to the horizon when the flowers are in bloom are still spectacular from the road.

Pro Tip: If you can, plan your trip to Keukenhof around the Bloemencorso Bollenstreek, when floats covered in flowers glide down the streets from Noordwijk to Haarlem in what’s touted as the largest spring festival in the Netherlands. 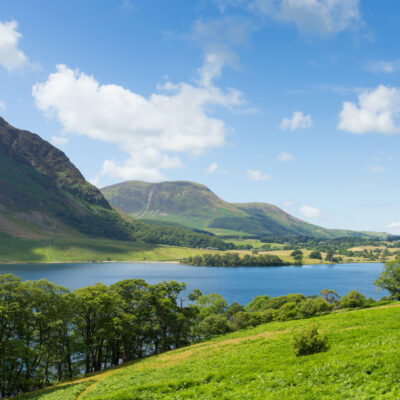