6 Frank Lloyd Wright Designs Where You Can Spend The Night

In 1991, the American Institute of Architects recognized Frank Lloyd Wright as “the greatest American architect of all time.”

Today, thousands of admirers visit his creations such as Fallingwater and Hollyhock House. But sometimes, whizzing through one of his homes on a timed tour isn’t enough. Wright’s structures deserve serious contemplation in order to observe how they blend into the landscape and make the owner feel both at home and at one with nature. It takes time to notice how every element — the colors, textures, and replicated patterns — meld into an organic whole. To experience this, one needs the almost spiritual experience of dwelling in a Wright space.

With a growing number of Wright properties available for overnight or vacation rentals, you can have this experience. The following is not a complete list of the Wright-designed homes available for rent. They are, however, examples of homes where the owners have gone to great lengths to restore the properties to the way Wright designed them. Plus, they are all in close proximity to other Wright sites.

Unlike the grand Fallingwater, many are Usonian homes, Wright’s low-cost, well-designed homes for the American middle class.

Polymath Park is located in the beautiful Laurel Highlands of southwestern Pennsylvania, less than 15 miles away from Fallingwater. The original owners of this 125-acre property, the Blums and the Balters, were artistically inclined families from Pittsburgh and friends of Edgar J. Kaufmann, the owner of Fallingwater. They also wanted summer homes built with Wright flair, but it was 1962, and Wright had died in 1959. They enlisted the help of Wright’s apprentice Peter Berndtson, resulting in the Balter House (1964) and the Blum House (1965).

Since 2007, the present owners, Thomas and Heather Papinchak, have relocated Wright-designed homes onto this property. Given the large area, each house is secluded and surrounded by miles of walking paths. Two of the Wright-designed options are available for overnight stays.

The Duncan House was originally built in 1957 in Illinois. Elizabeth Duncan admired Wright’s homes, but her husband didn’t think they could afford the architect’s work. In 1956, House & Home published an article on Wright’s Usonian prefab houses. These were not cookie-cutter homes but could be modified for each client, depending on their needs and the site conditions.

The Duncans purchased a version. For decades, this was their family home. By 2003, Donald Duncan had passed away, and there were fears that this would be the first Wright structure in more than 30 years to be demolished. In 2007, it was saved and brought to Polymath Park, where the Papinchaks lovingly reconstructed it. Such was their attention to detail that the Duncan House was situated according to its original coordinates.

Features of the three-bedroom, two-bathroom home include a living room that flows naturally into the surrounding landscape of trees and boulders, a terrace, a cathedral-ceilinged living room, Wright’s signature color — Cherokee red — on the wood and flooring, mid-century modern furnishings, and original tilework and fixtures. You will feel like you are back in the ’50s.

Wright’s Lindholm House — also known as Mantyla, meaning “of the pines” — was built in Cloquet, Minnesota, in 1952. Papinchak said that they tried everything to keep the structure at its original location, but when the home was at risk of demolition, the Frank Lloyd Wright Building Conservancy awarded Mantyla to Polymath Park, and the Papinchaks carefully reassembled all the numbered pieces and restored the home, even keeping the home’s southwest orientation in line with the original solar path and planting 50 pine trees to recreate the same feel.

At 3,000 square feet and with three bedrooms and two bathrooms, the home is larger than most Usonians. The house’s red terra-cotta-tiled roof slopes upward like a ship’s prow. The large living room overlooks an outdoor terrace through 10-foot-tall windows trimmed in cypress that let in lots of sunlight. The house is decorated with vintage photos and framed Japanese artwork — a fitting touch, given that Wright collected Japanese prints and even dealt in them. An M-shaped geometric pattern is repeated throughout, including on the living-room clerestory windows. You’ll also find built-in bookcases, original Wright-designed furniture, and a reading nook. The kitchen features red countertops and original appliances, and the dining room features a dramatic triangular fireplace.

The houses at Polymath Park have microwaves, but the stovetops, cooktops, and fireplaces are not available for use. The on-site restaurant, Treetops, was an OpenTable Diners’ Choice 2019 award-winner, with Wright-inspired furniture and a terrace to make you feel like you are dining in the treetops.

Guided tours of the four homes on the property are available. Many Wright fans combine a stay here with a visit to nearby Fallingwater and Kentuck Knob.

The Seth Peterson Cottage was one of Wright’s last commissions, and The New York Times called it “one of the most remarkable things Wright ever designed.” Seth Peterson was a young man in his early 20s when he asked Wright to design a haven to share with his intended bride. Unhappy in love, he ended his life and did not see the cottage completed. It then had various owners. After it fell into disrepair, concerned locals formed the Seth Peterson Cottage Conservancy in 1989, organizing a three-year restoration.

Visitors can now stay in this one-bedroom cottage nestled in Mirror Lake State Park. Built on a bluff and quite compact at 880 square feet, it has a spectacular living room of glass and wood, and sharp angles frame the lake view. The outside flagstones continue inside the building as the cottage floor, according to Wright’s philosophy of little distinction between the outside and inside worlds. The huge fireplace is core — Wright believed that the fireplace was an important gathering place. Not all Wright rentals allow open fires, but here, the firewood is supplied.

There is a two-night minimum stay, and you must make reservations years in advance. Outdoor activities include hiking and swimming, and the cottage comes with a canoe. The accommodation is listed on the Wisconsin Frank Lloyd Wright Trail.

The lovingly restored, four-bedroom and 2.5-bathroom Bernard Schwartz House was originally designed as Life Magazine’s 1938 Dream Home. A stay at this Usonian is a chance to experience Wright’s vision for how the average American family should live. Wright dubbed it Still Bend due to the peaceful setting on the curve of the East Twin River. Features include wraparound built-in seating, geometrically patterned clerestory windows that create patterns in the sunlight, a soaring interior balcony, and a distinctive trellis on the terrace.

A two-night minimum stay is required. The home is close to the Wisconsin Frank Lloyd Wright Trail.

Wright designed the Emil Bach House in 1915 as a family residence. It’s located near the shores of Lake Michigan, and originally there was an unobstructed view of the lake. This is a unique chance to stay in one of the geometric homes Wright designed in the late Prairie style, with a cantilevered flat roof. The owners have shown incredible dedication to restoration, spending two years on the project. Features of this 2,700-square-foot home include inglenooks, reproductions of the original furniture, open living areas, and a pool house. This was built by the previous owner, but in keeping with Wright’s love for all things Japanese, it was converted into a Japanese-style teahouse.

There are three bedrooms, each with an outdoor deck, and three bathrooms. The house is also available as an event space for up to 75 people. The house is on the Illinois Frank Lloyd Wright Trail. Every May, Chicago holds a Wright Plus Housewalk, with rare interior tours of private residences designed by Wright.

Built in 1955, the three-bedroom, 1.5-bath Louis Penfield House is set on 30 acres along the Chagrin River. Wright believed that the human body should be the measure of a building and designed accordingly. The original owner, Louis Penfield, was 6 feet, 8 inches. The house has upward-reaching windows, tall doorways, and 12-foot ceilings. Penfield’s son, Paul, and his wife refurbished the home in the early 2000s and began renting it out to architecture lovers. Rather than offer tours, Penfield was determined to preserve the home’s family atmosphere, saying that he “wanted people to experience it not as a house museum, but as their own home, like I did as a kid.”

The house is 1,730 square feet. Striking elements include a floating staircase, heated floors, Wright-designed furniture, and a panoramic view of the Chagrin River.

There is a two-night minimum stay. Dedicated fans of Wright’s Prairie style may also enjoy a visit to Ohio’s Westcott House and a tour of the Weltzheimer/Johnson House.

Wright was also interested in planned communities. In the 1940s, a group of scientists invited Wright to visit the Kalamazoo area and draft architectural plans for them. Samuel Eppstein was one of these scientists. In 1947, Wright designed the homes in The Acres, a plot of about 70 acres with 21 homes and 50 acres of open space. Today, it’s the only remaining neighborhood fully designed by Wright.

The Samuel Eppstein House, now an Airbnb, was completed in 1953. The design has 2,250 square feet of living space, including two living areas, plus three bedrooms and two baths. The fully restored house is furnished with many original Wright pieces and has an open floor plan, large windows, and radiant floor heating. The structure also houses copies of the correspondence between the Eppstein family and the Wright offices, as well as a collection of books related to Wright. Many guests find themselves reading for hours.

The house overlooks a meadow where deer sometimes roam, and there are plenty of walking trails. Given the neighborhood, you can easily view other Wright designs. No children under 12 are permitted to stay.

Nearby Wright attractions include seasonal tours of the Usonian Smith House and Affleck House. There are also free tours of the Meyer May House, a fully restored Prairie-style home. 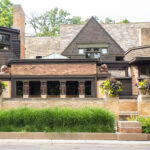