There are no national parks in the state of Illinois. So if you live in Illinois (like me), you have to rely on state parks to find outdoor adventures. In Illinois, there’s one state park listed above all the others: Starved Rock State Park.

Sure, it doesn’t have the mountains of California’s Yosemite or the geysers of Wyoming’s Yellowstone, but Starved Rock is Illinois’ crown jewel of outdoor adventures. Known as The Prairie State, Illinois is mostly known for being completely flat, but Starved Rock offers canyons and waterfalls and river overlooks that will convince you that you’re no longer in Illinois.

1. The Canyons And Waterfalls

The canyons are the reason that this area was preserved as a state park. There are several creeks and streams that descend from the hills around the Illinois River Valley and make their way to the river. Over time, due to the very soft sandstone in the area, those creeks and streams have carved deep canyons in the river bluffs.

In the spring, or even in the summer after it has rained, these canyons are active waterfalls. But if you get there on a hot summer day when it’s been dry and the waterfalls aren’t running, that’s alright too — the carved sandstone canyons are a sight to behold as well. And if you’re planning a cold-weather trip, don’t miss these eight tips for visiting Starved Rock State Park in the winter.

All in all, there are 13 miles of hiking trails (including one of the most beautiful hikes in Northern Illinois) that connect all of the canyons. Stop at the visitors center and get a map (or print it out here before you go). That will help you find the length of the trail you want to walk in your trek to see the canyons. Your hike can be as short as the quarter-mile trek from the parking lot to Aurora Canyon or as long as the 4.7-mile trail (9.5 miles round trip) all the way to Illinois Canyon. There are also loop trails that will help you see multiple canyons — probably the best one of these takes you from the upper parking lot (by the lodge) to French Canyon and Pontiac Canyon.

The lodge is another “main attraction” at Starved Rock. It’s an old stone lodge built by the Civilian Conservation Corps (CCC) in the 1930s. Everything you’d see on some Hallmark movie set in an old lodge up on a hill or mountain somewhere? That’s what you’ll find at Starved Rock State Park Lodge.

I’ve stayed there twice. You can choose either the “old” or the “new.” Some rooms are in the original lodge and the layout is more or less unchanged since the 1930s with knotty pine walls and ceilings. Or you can stay in the hotel wing, a newer wing of the lodge with more modern hotel rooms. You won’t get the knotty pine feel of a lodge, but you’ll get a larger room with more amenities. Want to stay somewhere other than the lodge? Take a look at our picks for the best places to stay near Starved Rock State Park.

And make sure to explore the entire lodge property. In the summer, a cup of coffee on the patio with views of the river to the north is nearly perfect. Or during a chilly day in the spring or fall (or even the winter), the couches around the grand fireplace in the main hall are sublime.

Starved Rock State Park sits right on the Illinois River. In that portion of the river, there’s a lock and dam (aptly named Starved Rock Lock and Dam). Just downstream from the dam is Plum Island, and this island has been preserved as an eagle sanctuary. So if you’re there during the right time of year, you’ll be able to see the eagles out over the river.

Plum Island used to be an airstrip with a cable car connected across to Starved Rock. The airstrip closed in 1975, and in 2004, the Illinois Audubon Society purchased Plum Island to preserve it as an eagle sanctuary. Because of the lock and dam just upstream, eagles will nest in the trees of Plum Island and then fish the waters of the river just below the dam. The best time to see the eagles is December through March, but many times, especially if they still have a little one in a nest, they will stay in the region throughout the late spring, sometimes even into early summer.

4. To Explore The Illinois Valley Region

In the north-central part of the state, the Illinois River has created a long river valley, a rarity in Illinois given the flatness of the state. This valley is home to wineries, river towns, and outdoor activities (like Starved Rock) not really found in other parts of the state.

So if you’re checking out Starved Rock, take an afternoon to see the entire river valley. There are several wine tasting rooms just across the bridge from Starved Rock (in North Utica), and the town of Ottawa has many great restaurants right on the river. The twin cities of Lasalle and Peru also have several old mansions available for tours. There is a lot of Illinois history here, so get out and find it!

5. The Hike Out To The Overlooks

Besides the canyons, there are two great hiking destinations within the park. Both are within a mile of the visitor center and the lodge. The first is Starved Rock itself, a steep (but short) climb from the visitor center up to the rock outcropping from which the park gets its name.

The second is the cliff with the two main overlooks: Lover’s Leap and Eagle Cliff. Follow the River Trail past the Starved Rock trail and you will climb up to Lover’s Leap first. This deck gives you a view of the area below the dam as well as Starved Rock itself. Keep going on the river trail and you’ll come to Eagle Cliff Overlook, another deck out over the river that gives you a view of the river above the dam (and all points east). All three spots require a bit of climbing (steep trail, not climbing over rocks), but all three views offer a huge payoff.

I love Starved Rock State Park and have visited there several times. But of all the canyons in the area, I think I like the main canyon at Matthiessen State Park the best.

Matthiessen State Park is in the same area (only three miles away) and provides maybe the best walking trail in the region. The river here cuts a deep canyon through the sandstone as it meanders down to the Vermilion River (and on to the Illinois River). The loop trail lets you see all parts of that canyon including two bridges across the canyon and a stairway that will take you down to the bottom.

There are two areas to Matthiessen State Park (map is here) — the Dells Area and the River Area. To find this canyon trail, you’ll want to follow the signs to the Dells Area. From there, you’ll descend a long stairway down into the canyon and can take the loop trail either direction. Or, if you just want to see the canyon and then return to your car, walk straight across the bridge and look down.

7. Brunch At The Lodge On Sunday Morning

This might be the best part of the entire experience at Starved Rock. On Sunday morning (and early afternoon) in the lodge, the restaurant has an incredible Sunday brunch buffet. I’m not sure I’ve ever seen more food put out for a Sunday brunch.

Make sure to call ahead for reservations and brunch availability given current restrictions on buffets in Illinois. We’ve eaten both the buffet at Starved Rock Lodge as well as the weekday breakfast out on the veranda and both were incredible. There’s just something about breakfast at an old stone lodge.

But this dynamic also occurs at the visitors center and the lodge. The visitor center (which includes several displays telling the history of the area) is at the “bottom” down by the river. The lodge is at the “top.” If you plan to travel between the two, please know that it’s a metal stairway with more than 100 steps.

Because of that, if you have concerns about steep climbs, it’s best to plan your trip based on that. If you want to take the loop trails that look down into the canyons, park up by the lodge and stay on that level. If you want to take the trails down by the river and maybe try to catch a glimpse of an eagle, park down by the visitors center and stay on that level.

And if you want a workout, climb the stairs between the two. Whatever you do, you’re probably going to want to see the canyons and overlooks, so map out your walk accordingly. 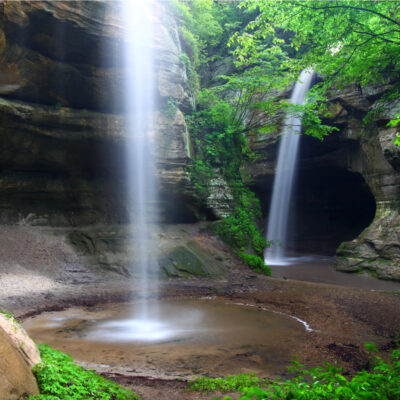 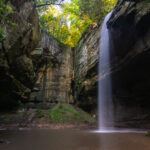 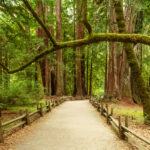 State Parks15 Best State Parks To Visit In The U.S.