How To Spend A Perfect Weekend In Baton Rouge

The capital city of Baton Rouge is often an afterthought for people visiting Louisiana, and it’s used to playing second fiddle to its flashier and better-known big sister, New Orleans. But there’s much more to this river town than you might think. In fact, it’s the perfect place to spend the weekend during your next Louisiana adventure.

Here are a few things you’ll want to see, do, and experience in Baton Rouge.

What To Do In Baton Rouge

Baton Rouge is an old city, first founded by French explorers in the early 1700s and named for a stand of red cypress trees that marked the edge of a hunting ground for local Native American tribes. Today, you can explore its history at several hands-on museums, stroll its beautiful green spaces, and visit the state’s flagship campus.

Baton Rouge has been the capital of Louisiana since 1849, and it has not one, but two state capitol buildings worth visiting.

The Old State Capitol is an unmistakable white Gothic structure that looks like a castle floating right above the Mississippi River. It hosted Louisiana state lawmakers from 1850 until it was nearly burned to the ground during the Civil War. Legislators met in New Orleans until it could be reconstructed in 1884. Today, it’s a gem of a museum — with sweeping stained glass windows and an iron staircase — that tells the story of Louisiana’s early days.

Governor Huey Long convinced lawmakers that a bigger, bolder capitol building was needed, and the art deco tower that is currently in use was completed in 1932. It’s the tallest capitol building in the United States, and its rooftop observation deck — which is open to the public — offers incredible views.

Get Your Art Fix

The Louisiana State University Museum of Art, housed at the Shaw Center for the Arts downtown, houses exhibits from around the world that focus on a number of different types of art. Its permanent collection includes 6,500 objects ranging from ancient Chinese jade to American folk art. There’s something for every art lover at this museum.

Meet The Pirate Of The Pacific

The enormous destroyer permanently moored on the Mississippi is the USS Kidd Veterans Museum. Named for Medal of Honor recipient Isaac C. Kidd Sr., who was killed on the USS Arizona during the Pearl Harbor attack, it was active during World War II. It became known as the Pirate of the Pacific, since it served in several campaigns and hopped islands in support of Allied forces.

Today, the restored ship is open for tours, and an attached museum includes exhibits and artifacts related to naval military history. Countless local scout troops and youth groups have spent the night on the USS Kidd, since the bunks are open for a one-of-a-kind camping experience. (But we’ll have more spacious recommendations for accommodations later!)

Baton Rouge, with its extensive riverfront, also has its fair share of riverboat casinos. If you’re feeling lucky, place your bets on one of them! The newest offering is the L’Auberge, just a bit south of town. The casino complex features all the games one would expect, with guest suites, several on-site dining options, and a pool overlooking the Mississippi with private cabanas and bar service available.

Louisiana State University (LSU), the state’s flagship institution of higher education, is located right in town. It’s a great place to get your steps in, with its classic architecture (Memorial Tower in the Quad is a favorite meeting spot), gorgeous landscape, and towering live oaks.

Of course, no visit to campus would be complete without a stop to see Mike. Mike is LSU’s live tiger mascot who lives across the street from the football stadium in a sprawling habitat. The first Mike arrived on campus back in 1936; the big guy you’ll see there today is Mike VII. Mike has a personal vet from the LSU School of Veterinary Medicine who is in charge of his overall health and well being, and he is a beloved member of the LSU community.

If you happen to be in Baton Rouge during the college sports season, consider grabbing tickets for a game. LSU has top-notch football and baseball teams, and taking in a game in Baton Rouge is an experience like none other.

Make A Lap Around The Lakes

Baton Rouge has several lakes that are popular with joggers, hikers, bird-watchers, and kayakers. Just to the east of LSU, University Lake is a favorite. Hundreds of men with the Works Progress Administration built it out of swampland in the 1930s, and it has delighted outdoor enthusiasts ever since. The surrounding lakes — City Park, Crest, Campus, College, and Erie — are all in close proximity. Pack a picnic, take a stroll, and keep an eye out for majestic cypress trees rising up from the water, as well as white pelicans and the other birds that come here to fish and feast.

Take A Trip Back In Time

The LSU Rural Life Museum gives visitors a hands-on look at what life was like in the rural areas surrounding Baton Rouge in the 1700s and 1800s. The on-site folk architecture at the 400-acre complex includes a country church, pioneer cabin, Acadian house, and shotgun home. A barn contains hundreds of artifacts that further demonstrate what life was like for these early settlers. And the plantation quarters spare no detail when it comes to illustrating the horrible injustices that those who were enslaved faced for generations.

The surrounding Windrush Gardens are easy and delightful to wander, as are the adjacent and gorgeous LSU AgCenter Botanic Gardens.

Where To Eat In Baton Rouge

Oh, where to begin? Baton Rouge, with its burgeoning foodie scene, sits at the crossroads of several distinct cultural zones, each with its own take on cuisine. Cajun, Creole, fine French, and down-home Southern comfort food can all be found here.

For a cozy but refined and romantic meal, head to Maison Lacour. This long-time foodie favorite focuses on French cuisine without the Cajun or Creole influences, with the lovely wine and dessert list you’d expect.

Near LSU, The Chimes is a perennial favorite for faculty, students, and visiting families. Their barbecue shrimp, boudin balls, and oysters on the half shell are incredible, as is their remoulade.

For terrific food and a more laid-back vibe, try out Pastime. This spot near Interstate 10 began its life as a grocery store in the 1920s. It’s been famous for its deep-fried seafood po’boys and pizza for more than 60 years now.

And if you need a culinary boost on Sunday morning, head to brunch at Beausoleil. Their yummy menu relies mostly on savory bites and style, with local oysters, shrimp, and crawfish served fried, over grits, or folded into eggs.

Where To Stay In Baton Rouge

For a luxe stay with a historic feel, check in to the Watermark Baton Rouge. This hotel, located downtown, is housed in the former Louisiana Trust & Savings Bank. The renovation spared its gorgeous carved marble walls and staircases, along with its hand-painted murals. The former bank vaults have been converted into dining spots.

The Renaissance Baton Rouge features upscale amenities with easy access to shopping at the massive Mall of Louisiana and the Perkins Rowe development.

If you’re craving a more intimate, inn-like stay, reserve a room at The Stockade Bed and Breakfast. The hacienda-style main house is located near the site of a strongpoint built by Union troops to protect the southern entrance to Baton Rouge during the Civil War.

Pro Tip: The sun is hot and direct almost year-round in Baton Rouge. Make sure you apply sunscreen before you head out, keep a small tube of high-SPF block with you in case you need to reapply, and also consider lip balm or gloss with extra SPF protection. When all else fails, especially in the hot summer months, a floppy hat can be a smart, safe, and stylish accessory. 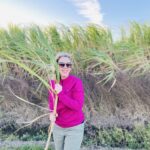