The Best Things To Do In Albuquerque: Where To Play, Eat, And Stay

Located in the heart of New Mexico where Interstates 40 and 25 intersect, you may know Albuquerque as the site of the world’s largest balloon festival and the setting for the suspenseful Breaking Bad and Better Call Saul television series.

But did you know that Albuquerque is the oldest wine-producing region in the United States, that Microsoft was founded in Albuquerque, or that the city sits at the highest elevation of any major city in the U.S.?

Founded in 1706 by Don Francisco Cuervo y Valdes, the governor of Spanish Colonial New Mexico, the city was named for the Duke of Alburquerque (yes, with an extra r), which is why it’s often called the Duke City. One of the oldest cities in America, Albuquerque was an important stop on El Camino Real de Tierra Adentro, a trade route that linked Mexico City with Santa Fe.

Here’s what to do, where to eat, and where to stay when you visit Albuquerque, New Mexico’s biggest city.

Things To Do In Albuquerque

For more than one week in early October, the skies above Albuquerque fill with a rainbow of colorful hot air balloons. Look for them dotting the skies in traditional teardrop shapes and in unique silhouettes that range from cartoon characters to piggy banks.

While you should absolutely attend the Albuquerque International Balloon Fiesta at least once, Albuquerque’s rich Native American and Spanish history, abundant sunshine, and stunning scenery offer many things to see and do year-round.

Here are just a few activities to consider.

On the western side of Albuquerque is the Petroglyph National Monument, a 17-mile stretch of volcanic rock decorated with prehistoric street art known as petroglyphs. These petroglyphs were carved into the rock with a chisel and hammerstone long, long ago. Images of macaw parrots, pronghorn antelope, and soaring hawks document life in the high desert hundreds of years ago.

Discover the history, culture, and traditions of the 19 Pueblos of New Mexico that predated the Spanish and other European explorers by thousands of years at the Indian Pueblo Cultural Center. The museum also features the art of the Pueblo people, including baskets, pottery, paintings, and jewelry, and there are a variety of events on the patio throughout the day. One of my favorite experiences is watching Native Americans perform traditional dances in tribal clothing.

Whether you visit the Indian Pueblo Cultural Center around breakfast, lunch, or dinner, be sure to enjoy a meal at the Pueblo Harvest Cafe. The Pueblo-inspired menu comes from locally sourced ingredients and changes with the seasons, rolling out new items with the solstices. Try the blue corn pinon pancakes for breakfast, the blue cornmeal-crusted relleno or corned bison sandwich for lunch, or the tribal trout with prickly pear syrup for dinner.

From the atomic bomb that helped end World War II to present-day applications, the National Museum of Nuclear Science & History is dedicated to nuclear science. Perhaps it’s because I’m both the daughter and mother of physicists, but I absolutely love this museum! Exhibits highlight the Manhattan Project at Los Alamos, the ways nuclear medicine is saving lives, and the greener energy alternatives to fossil fuels.

Stroll Through The Old Town

With Pueblo-Spanish-style adobe buildings dating to the late 1700s, the Old Town is a 10-block historic section of Albuquerque. It’s a great place to experience the history, food, and culture of this 300-year-old city along El Camino Real. When you visit, don’t miss San Felipe de Neri Church, the oldest building in Albuquerque.

See The Animals At The ABQ BioPark

With 310 days of sunshine each year and a pleasant climate, Albuquerque is a great place to enjoy the outdoors. Head to the ABQ BioPark, which provides four experiences in one: a zoo, a botanic garden, an aquarium, and Tingley Beach.

The zoo is home to exotic animals from Down Under, like a koala and Tasmanian devils. It’s also home to polar bear brothers Koluk and Kiska. The botanical garden has been recognized as one of the best botanical gardens in the U.S. by the Travel Channel. Don’t miss the Butterfly Pavilion on the west side of the park or the Railroad Garden between the main entrance and the Butterfly Pavilion.

Take The Tramway To The Top Of Sandia Peak

For spectacular views of Albuquerque, take the tramway to the top of Sandia Peak. The ride on the longest aerial tram in the Americas takes about 15 minutes, with one of the two tram cars departing every 15 to 30 minutes. If you visit Albuquerque during the winter, you can spend a day skiing Sandia Peak. And Ten 3, the restaurant at the top of the mountain, is a gorgeous place to sip a cocktail or enjoy a bite, especially as the sun sets.

From Walter White’s house in the Northeast Heights to the local burger and burrito chain that serves as Gus Fring’s fast-food chicken empire, fans of Breaking Bad and the prequel Better Call Saul won’t want to miss seeing the real-life sites used to film the dramatic series. There’s even a tombstone-like plaque for the fictional Walter White at the Village Shops at Los Ranchos strip mall. Look for it on the outside wall near the back of the complex on the north side.

Stop By The Tasting Room At Casa Rondena Winery

Defying the Spanish Crown’s rule prohibiting winemaking in colonial New Spain, Catholic monks smuggled vines into the region and planted the first wine grapes along the Rio Grande nearly 400 years ago. While the first vineyards in the New World were used to make sacramental wine, they evolved over the years to be one of the largest wine-producing regions pre-Prohibition.

Just east of the Rio Grande today, nestled into a thicket of cottonwoods, the Casa Rondena Winery is one of the top-rated wineries in the state, chosen as best winery by readers of Albuquerque The Magazine for seven consecutive years. Stop by the tasting room for a flight of the locally handcrafted wines or to enjoy a glass on the patio.

The state of New Mexico is known for its flavorful red and green chiles. And when you visit the Land of Enchantment, you can find chiles on everything from pizza to macaroni to popcorn.

But did you know that New Mexico has an official state cookie? Biscochitos are crisp orange and licorice-flavored butter cookies sprinkled with cinnamon sugar.

These are the best places to eat in Albuquerque.

Located just across Central Avenue from the University of New Mexico, Frontier Restaurant has been a staple in Albuquerque since the early 1970s. Open 20 hours a day, seven days a week, this spot offers huevos rancheros on housemade tortillas topped with roasted green chiles. Or enjoy one of the famous sweet rolls surrounded by paintings of Duke in the Duke City.

Travelers may not consider grabbing dinner in the back of a pharmacy, but locals know that some of the best burritos, enchiladas, and tamales in Albuquerque can be found at the restaurant tucked into Duran Central Pharmacy.

For New Mexico green chile bread (see, I told you green chiles are on everything in New Mexico) and the best biscochitos, visit Golden Crown Panaderia. You’ll find classic biscochitos, but you can also enjoy the New Mexico state cookie in blue corn, chocolate, cappuccino, and even sugar-free flavors at this Albuquerque bakery.

Best Places To Stay In Albuquerque

My favorite place to stay in Albuquerque is Hotel Parq Central. Originally a hospital for employees of the Atchison, Topeka, and Santa Fe Railway, this centrally located 1926 building has been beautifully restored into an Italian-inspired luxury hotel. Whether you stay at Hotel Parq Central or another accommodation in Albuquerque, be sure to unwind at the Apothecary Lounge, the hotel’s gorgeous indoor/outdoor rooftop lounge.

You’ll find everything from national chains and boutique hotels to bed and breakfasts and vacation rentals in Albuquerque. Consider staying in Old Town Albuquerque or in the Northeast Heights neighborhood.

Remember that Albuquerque is located more than a mile above sea level. A change in altitude of just 1,000 feet can trigger altitude sickness, so be proactive in managing the altitude change by drinking plenty of water, reducing your alcohol and caffeine consumption, and easing into exercise.

Enjoying the flavorful New Mexican cuisine, you’ll be asked the state question, “Red or green?” to determine if you’d like red chiles or green chiles added to your meal. If you want to try both, simply reply, “Christmas.” 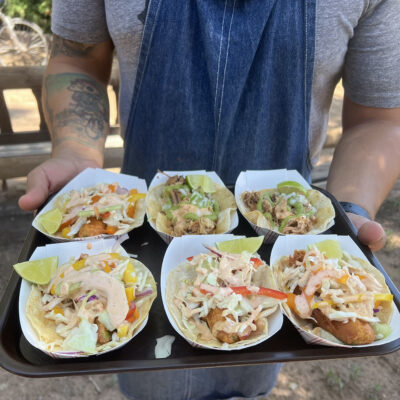 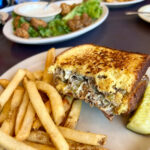 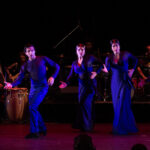 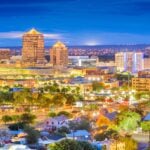