How To Spend A Perfect Weekend In Texarkana

Texarkana is actually two cities with the same name in neighboring states. The cities straddle the Texas-Arkansas border, less than 40 miles from the Louisiana border and about an hour southeast of Oklahoma. Centrally located along Interstate 30, the cities have a combined population of about 68,000, almost evenly split. No one is exactly sure how each city got its name, but it’s generally accepted that a railroad worker posted a sign reading TEX-ARK-ANA on a tree to identify where a town should be built. The name is a combination of the names Texas, Arkansas, and Louisiana. Imagine if they had incorporated Oklahoma!

Texarkana is the perfect place for a weekend getaway, a place where you can stand in two states at the same time and dive into the area’s rich history. Here’s what to do when you visit.

Adding to the uniqueness of the area with two cities of the same name is the building that sits on the state line. The federal courthouse, which is also a United States post office, is located on State Line Avenue. A sign marks the border. To the west is Texas, while Arkansas is on the east side. The building is said to be the most-photographed courthouse in the country after the U.S. Supreme Court.

The courthouse area is also home to two unique sculptures — a sculpture of Jim Bowie on the Texas side and a memorial to soldiers of the Confederacy on the Arkansas side.

Take In A Show At The Historic Perot Theatre

Opened as the Saenger Theatre in 1924, this downtown theater was built in the Italian Renaissance style and included a stage, orchestra pit, and backstage area. Originally designed for live theater, it later became a movie house. Its name was changed to the Paramount, and the theater eventually faded into obscurity.

In the late 1970s, millionaire businessman and two-time presidential candidate Ross Perot and his sister Bette donated nearly $1 million to renovate the theater. Its name was changed to the Perot Theatre in honor of their parents, who were Texarkana natives.

Today, the theater, which is located on the Texas side of the border, hosts Broadway traveling shows and concerts. Visitors can take a behind-the-scenes tour of the theater and learn more about its past, including the era of segregation.

Tour A House That Resembles The Ace Of Clubs

Built to resemble the ace of clubs, the Draughon-Moore House has 22 sides as a result of three octagonal wings and a rectangular wing. Three families occupied the home from 1880 through 1985, when it was donated to Texarkana’s museum system.

Today, you can tour the house, taking in rooms preserved to reflect life in the home between 1880 and 1940. The home is on the National Register of Historic Places and also boasts a beautiful flower garden.

See The Classic Cars At The Four States Auto Museum

About 20 classic cars and other vehicles await you at the Four States Auto Museum. Open since 2004 in an old downtown storefront on the Arkansas side, the museum features a rotating exhibit of vintage automobiles, some dating back to the 1950s. The cars are replaced about every three months. As you stroll through the small museum, take in the vintage garage and gas station signs, as well as other road-trip memorabilia. The museum also hosts car shows throughout the year.

Check Out The Museum Of Regional History

Offering a look into the area’s history, from the Native Americans who originally called the area home to the area’s jazz roots and agriculture, the Museum of Regional History is located in the area’s oldest brick building. Opened in 1971, the Museum of Regional History is the Texarkana metro’s oldest museum. In addition to a collection showcasing the Caddo tribe’s jewelry and pottery, the museum celebrates the musical influences of jazz great Scott Joplin, a Texarkana native, as well as other musicians. Other exhibits cover the region’s agriculture and the Spanish and French explorations of the area.

Enjoy a walk along the nearly 2-mile-long walking trail at Spring Lake Park. The park is the star of Texarkana’s public park system, with a splash pad and playground for children. You can relax and cast your line in hope of snagging a fish or two in the lake, or maybe pack a basket and enjoy a picnic with the grandkids. During the spring and fall, the park hosts outdoor movies, so you can grab a lawn chair or lay down a blanket for an old-fashioned outing.

Less than 40 minutes northeast of Texarkana is the hometown of President Bill Clinton. Now maintained by the National Park Service, the President William Jefferson Clinton Birthplace Home is a two-story wood-frame house in Hope, Arkansas. The future president and his mother lived there with her parents following the death of Clinton’s biological father, William J. Blythe Jr. Clinton’s mother later married Roger Clinton and moved across town, and her son took his stepfather’s last name.

Period-appropriate furnishings, including Clinton’s cowboy-themed bed, are located throughout the house. A park ranger leads the guided tour, which includes a climb up a steep set of stairs.

Following your visit to the Clinton home, take a short walk around the downtown area, which includes a former railroad depot that now serves as a museum focused on President Clinton as well as other local celebrities, including actress Melinda Dillon (A Christmas Story), former Arkansas Governor Mike Huckabee, and actress and singer Ketty Lester.

Where To Eat In Texarkana

Both sides of the border offer outstanding cuisine at an affordable price. Here are some of my favorite spots.

Hopkins Icehouse is located in a former feed store. Area railroad workers used to keep their drinks cold in iceboxes in order to enjoy them after their shift. The Hopkins Icehouse maintains that corner bar sort of vibe, with eclectic decor, wooden floors, and a variety of wall and ceiling decorations, such as bicycles and old signs.

The food is impressive, and the portions are hearty. The classic American fare includes burgers, pizza, salads, and a variety of sandwiches, from chicken sandwiches to French dip sandwiches.

Reggie’s Burgers opened in 2012 with the mission of creating a burger that everyone would enjoy. The Texas location operated as a single restaurant until the company added a second location on the Arkansas side.

The fresh certified Angus beef burgers are made to order with the toppings of your choice, such as cheese, pickles, grilled onions, and coleslaw. You can get a deep-fried hot dog with all the trimmings, if that’s your thing. A unique menu item is the bologna sandwich. This isn’t the sandwich your mom used to make; Reggie’s uses quality thick-cut bologna for the fried sandwich. Don’t forget a side of fresh French fries, and cap your meal off with a freshly baked pie.

Big Jake’s Bar-B-Que is a throwback to the days of the old TV westerns. While there are five locations throughout the Texarkana area, you’ll want to visit the original location on the Texas side, located inside a former Dairy Queen, for a truly unique experience. The walls are adorned with black-and-white photos of cowboys and sports teams and other memorabilia.

Jake’s combines great smoked meats — including ribs, brisket, and burnt ends — with outstanding sides, such as okra, coleslaw, baked beans, and mac and cheese, for a true Texas barbecue experience. Be sure to order one of the apple, cherry, or peach fried pies for dessert.

Where To Stay In Texarkana

National chain hotels have been popping up around town as Texarkana has grown in popularity, so it’s easy to find a clean, comfortable hotel at an affordable price. From the Hampton Inn and Suites on the Texas side to the Holiday Inn Express & Suites Texarkana East on the Arkansas side, the metro area is home to nearly 50 hotels.

Centrally located along major highways and Interstate 30, Texarkana offers an easy and affordable weekend getaway. With its unique location and history, it provides plenty of fun (and fried pies!) without big-city crowds and prices. 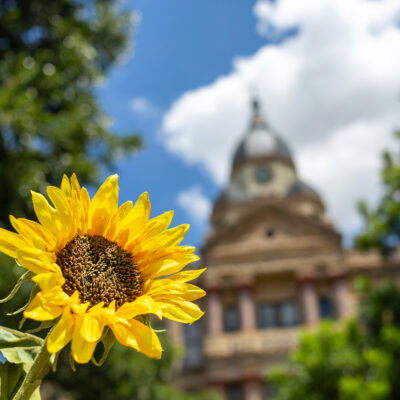 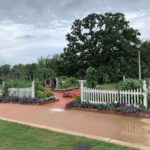 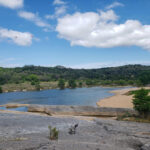 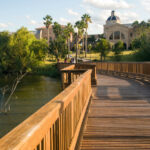 Texas11 Fabulous Things To Do In Beautiful Brownsville, Texas