How To Spend A Weekend In Springfield, Illinois

You probably know Springfield, Illinois, as the home of President Abraham Lincoln. The city does an outstanding job promoting its connection to the 16th president of the United States. While you can tour the Lincoln presidential library, home, and other sites of interest, there are other neat attractions in the area, from stately historic homes to a beautiful botanical garden to a retro Route 66 eatery.

If you’ve got a weekend in Illinois’s capital city, you’ll want to explore the history and culture Springfield offers. Here are some of the best things to do in the area.

Springfield is home to Lincoln’s law office, his home, and his impressive presidential museum and library. It was the city the president called home and where he planned to retire. Sadly, he never got a chance to do so, since he was assassinated shortly after the Civil War ended in victory for the Union. Today, visitors can learn more about Lincoln’s life and legacy at the many Lincoln-related attractions in Springfield.

Located in the center of the city, the Abraham Lincoln Presidential Library and Museum provides a look into Lincoln’s life, from his childhood in Kentucky to his legal and political careers. The museum tells the president’s story in an informative and engaging way. Tours cost $15 per adult, but people 62 and older can get in for $12.

After visiting the library and museum, head over to the Lincoln Home National Historic Site, which is maintained by the National Park Service. The two-story wooden structure is located in a neighborhood that showcases life in the mid-1800s. Inside, the home features furniture from that era as well as some family items. The house tour is free and offered on a first-come, first-served basis.

As you trace the president’s footsteps, be sure to stop by the Lincoln-Herndon Law Offices, where the president practiced law before his election. Nearby is the Old State Capitol, famous for being the site of Lincoln’s “House Divided” speech. Inside the former capitol building, you can view exhibits that cover political life in Springfield during the time period. As you stroll around the downtown area, you’ll spot a number of Lincoln-related historical markers.

Lincoln, his wife, and three of their four sons are interred at the Lincoln Tomb at Oak Ridge Cemetery. Consider stopping by to pay your respects.

Frank Lloyd Wright was considered the best architect of his time. He designed more than 1,000 buildings (more than half were built) and catered to the dreams of the social elite.

The socialite Susan Lawrence Dana sought to have the world-famous Wright design a home for her in Springfield. The Dana-Thomas House, constructed in 1902, was the 72nd house designed by Wright and contains 35 rooms on three levels. The 12,000-square-foot Prairie School-style home features special art glass and furniture featuring Wright’s signature straight lines and 90-degree angles. Today, visitors can tour the elegant home for a reasonable donation.

Springfield’s oldest house located on its original foundation, the Edwards Place Historic Home, was constructed in 1833. Built for Benjamin Edwards, an attorney and the son of the Illinois Governor Ninian Edwards, the home served as the scene of major social events and hosted dignitaries such as Lincoln and Stephen A. Douglas. The home was often used for political rallies as well as picnics. With its Victorian-era furnishings, the home showcases life as it was in the late 1850s.

From March through December, the home offers tours Tuesday through Saturday. You might also want to consider participating in the tea parties or Canvas and Cocktails painting events the site offers.

Stop To Smell The Roses At The Washington Park Botanical Garden

The 20-acre Washington Park Botanical Garden offers gorgeous views and a dizzying number of annuals and perennials. There are 10 separate garden areas, including an extensive rose garden, a shade garden, a rock garden, and a peony exhibit.

As you tour the grounds, make sure to stop at the Conservatory, a domed structure that contains about 150 types of exotic plants from around the world. A 9,000-foot greenhouse is home to plants and flowers from the tropical parts of Africa, the South American rainforests, and the Asian jungles.

Talk To The Animals At Henson Robinson Zoo

Visiting a zoo brings out the kid in everyone. Who doesn’t enjoy a leisurely stroll to check out unique animals and exhibits? Open from March through October, Henson Robinson Zoo features animals from five continents, including sloths, mountain lions, spider monkeys, and otters. The zoo also has a popular penguin exhibit.

Offering more than 20 varieties of wine, Walnut Street Winery prides itself on producing small batches of wine for every palate. About a 15-minute drive from downtown Springfield, Walnut Street Winery makes its home inside a former insurance agency. The winery produces a raspberry pinot noir, blackberry merlot, peach chardonnay, apple riesling, zinfandel, and pinot grigio. They’re all bottled under the name Shanle Wines.

The winery is open daily and offers a menu of almost a dozen pizzas plus meat and cheese plates, cheese curds, and other snacks. While you’re at the winery, you can play a game of bocce ball or take your chances at the slots in the Money Room.

The Illinois State Capitol is chock-full of history, and I recommend taking advantage of the free guided tours that are offered. The building is the sixth structure to house the state offices; the nearby Old State Capitol was the fifth.

A number of well-known figures have served as the state’s chief executive, including Adlai Stevenson. Portraits of the state’s governors hang on the walls of the first floor. Notice that the state’s most infamous governor — Rod Blagojevich — is missing. This is because he was convicted of attempting to sell the U.S. Senate position vacated in 2008 when Barack Obama was elected president.

Statues and other works of art are highlights of the tour. As you walk through the House of Representatives and the Senate chamber, you’ll notice the attractive trim on the ceilings and columns and the chandeliers over the legislators’ desks. The former state Supreme Court chamber is now a Senate hearing room. The governor’s office has a modern design, including a glass facade that allows visitors to see the governor and his staff in action.

Where To Eat In Springfield

Make time for the Cozy Dog Drive In, the home of the original corn dog. Ed Waldmire Jr. and a college friend developed the iconic snack, and in 1949, Waldmire and his wife opened a restaurant on the famous Route 66. Ever since, Cozy Dog has been popular with locals and visitors alike. Offering breakfast, lunch, and dinner, Cozy Dog moved to its current location in 1996, next door to the original spot. Besides corn dogs, Cozy Dog’s menu features burgers, cheeseburgers, chili dogs, and pork tenderloin sandwiches.

Famous for its layered concoction, affectionately known as the Horseshoe, Charlie Parker’s Diner takes your choice of meat, places it on slices of bread, and then tops it with French fries or tater tots and cheese sauce or biscuit gravy. If you prefer a healthier option, the diner — open daily from 6 a.m. (7 a.m. on Sundays) to 2 p.m. — offers breakfast sandwiches and omelets as well as burgers, chili dogs, and fish sandwiches. Charlie Parker’s has been featured in national magazines as well as an episode of Food Network’s Diners, Drive-Ins and Dives.

With a casual menu featuring a variety of flatbread pizzas, salads, burgers, and appetizers (including delicious Bavarian pretzel rolls), Obed & Isaac’s combines history with tasty food. The restaurant is located inside a renovated Italianate manor near Lincoln’s home. Obed & Isaac’s also offers a bocce ball court, a beer garden, and a nice selection of beer and cocktails.

Where To Stay In Springfield

If you prefer a more intimate, unique experience, the Flagg Farmstead Bed & Breakfast is both cozy and rich in history. The five-bedroom 19th-century farmhouse just north of Springfield provides a continental breakfast each morning. Enjoy a walk around the property’s beautiful 2.5 acres surrounded by maple and oak trees. 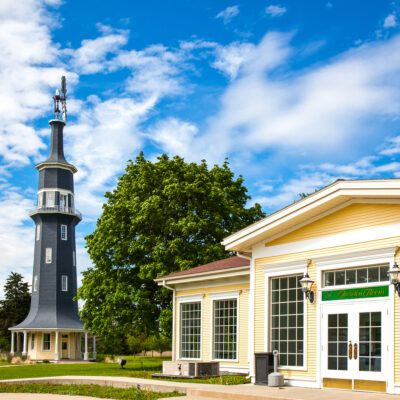 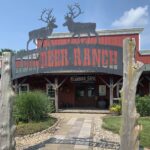 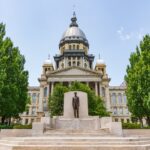 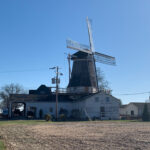