10 Things To Know When Planning A Visit To Alcatraz

Alcatraz Island sits so close to the city of San Francisco that it’s as if it’s beckoning to you to visit. It’s visible from all along the wharf and from the high hills of the city, and it’s sure to pique your curiosity.

You’ve likely heard of its reputation as a maximum-security prison, but the island is more than old buildings with barred windows. Alcatraz provides hours of fascinating sights. And the boat ride there, with its stunning views of the Golden Gate Bridge and San Francisco, makes the trip worthwhile before you even set foot on the island.

Tours of Alcatraz have grown in popularity, and you will want to book ahead to ensure you get a spot.

Here are 10 things to know before you go to ensure you enjoy your visit to the fullest.

1. Be Sure To Book Ahead

If you postpone making a tour reservation until the week you are visiting San Francisco, you may be disappointed. Book at least a few weeks in advance, if possible — you can order tickets up to three months in advance. Only one company, Alcatraz Cruises, sells tickets for island tours. Go online and choose a day tour, night tour, or behind-the-scenes tour. Your ticket will be for a specific time. Boats depart until mid-afternoon, so even the last boat of the day will allow for plenty of time to tour Alcatraz.

Some sites sell bay cruise tickets that include “seeing” Alcatraz from the boat, but not landing there. Be sure to book through the official site if you want to do more than a sail-by.

You’ll be walking up steep hills and old steps, so wear flat-soled shoes. I wore tennis shoes that were nicely cushioned, which turned out to be perfect for the somewhat uneven paths and worn stairways.

San Francisco can be chilly even in the summer, and fog and rain are common. A windbreaker jacket is a good idea at any time of year. Dress in layers if the weather is iffy.

3. Arrive Early For Boarding At Pier 33

It’s tour day! With your pre-purchased timed ticket in hand, head for Pier 33 about a half-hour early to check in. The numbered piers on the wharf begin at the Ferry Building and go in order toward the popular Pier 39 and Fisherman’s Wharf just beyond. You’ll have no trouble finding Pier 33.

Board the boat at your assigned time and settle in for a lovely 20-minute cruise with views of the Bay Bridge, the Golden Gate Bridge, Angel Island, and the city of San Francisco. Little white sailboats dot the water. It’s quite a picturesque ride.

4. Pick Up An Audio Tour At The Cell Block

Disembark at the dock, right next to the iconic guard tower. Listen to the brief orientation talk given by a National Park Service guide, then head up a hill to the main attraction of your tour: the prison cell blocks. Alcatraz is best known for its years as a federal prison (from 1934 to 1963), though in earlier years it served as a fort.

Enter the main building, just as the prisoners did. When a prisoner arrived, clothes were issued, along with shaving equipment and other basics. The receiving area is set up to show you how this looked. Move through the communal shower area to pick up an audio tour in your language.

I often pass on audio tours, since they can be more cumbersome and distracting than helpful, but at Alcatraz, the audio guide will tell you exactly how to navigate the large building. Hearing the stories told by guards and prisoners will enrich your experience of Alcatraz.

5. You Can Experience A Jail Cell

At Alcatraz, you can go inside a few of the cells and get a good feel for life behind bars. Look out at your fellow tourists wandering the hallways at leisure and envy them.

When I first visited Alcatraz, a guide would shut the door of the solitary confinement cell, leaving you in total silence and darkness. That’s no longer an option — I’m guessing it was too frightening! But it’s still a remarkable experience to stand in the place where prisoners spent months and years and imagine their lives.

6. The Island Has Its Own Lighthouse

After hearing the stories of the prisoners and guards and wandering up and down the cell blocks, you’ll emerge from the main prison building, and right in front of you you’ll see a tall lighthouse. Built in 1854 at the tip of the island, the lighthouse burned in 1970, but most of it survived, and it is operational today.

The shell of a large house next to the lighthouse, with its prime view of the city, once housed the warden and his family. It also burned in 1970, but in its heyday it was a mansion surrounded by ornamental gardens.

7. Look For Signs Of The Native American Occupation

A water tower rises above the north end of the island, and it tells of another era in the history of Alcatraz. Native American activists from San Francisco occupied the island for 19 months starting in 1969. They claimed the land for “Indians of All Tribes” (the name the occupiers gave themselves). When the last occupiers were removed from the island by government officials, graffiti on some of the buildings as well as on the water tower remained: It now reads Peace and Freedom.

8. The National Park Service Tour Is Worth It

Alcatraz Island is now maintained and run by the National Park Service, which offers informative free tours throughout the day. Check the schedule of tours when you arrive at the dock.

I took the tour on escapes from Alcatraz and learned about the cell area where one escape attempt happened. The guide explained the differences between bar shapes and which were easier to saw through. I ended up returning to the cell blocks to study the bars and cells: Some bars were flat, and others were rounded. Details like that are what make the National Park Service tours so interesting.

9. The Old Officers’ Club Has Quite A History

Take a few minutes to examine the large ruined building just above the dock. This was at one time the Post Exchange and Officers’ Club. It’s mind-boggling that during its time as a federal prison, Alcatraz also housed the families of the prison officials in close proximity to the prisoners.

Those who were raised on Alcatraz remember the Officers’ Club fondly, recalling that they were almost unaware of the prison that stood a few yards away. The club featured a soda fountain and a bowling alley, and dances and parties regularly took place there. The children hopped on a boat to San Francisco for school each weekday.

10. Plan To Bring Your Own Food

I spent about four hours on Alcatraz. There’s plenty to see in that much time, but I was there at lunchtime, and I got hungry. No food is sold on the island, but you can pack snacks or a lunch, and I was so glad I did. Visitors are only allowed to eat in the picnic area beside the dock, which sounds restrictive. But there is a good reason for this. The island is a bird sanctuary and nesting site. The mission of the National Park Service is finding a balance between the high volume of visitation and the impact on the island’s wildlife. And sitting on a picnic bench, gazing at the skyline of San Francisco while munching on a deli sandwich is a great experience. You just need to plan ahead.

A day tour of Alcatraz will live in your memory for a long time. Stand on the island with the prison looming ominously above and sailboats gliding peacefully on the water below. You’ll find yourself imagining what life behind bars here was like, knowing that beauty and freedom were tantalizingly close but just out of reach. 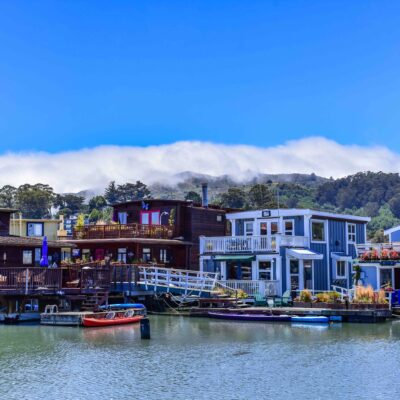 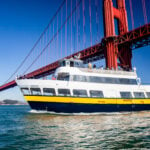