The Casemates du Bock in Luxembourg City are a highlight of a visit to the capital of the small country of Luxembourg. If you go to Luxembourg City, you will want to put them at the top of your itinerary. You may be wondering just what these casemates are and why you would want to see them.

The Casemates du Bock are a honeycomb of tunnels running under the ruins of the old fortress that protected the city for centuries. They are named for the rocky cliffs of Bock that tower over the gently flowing River Alzette as it meanders through the city. The old fortress and the casemates are impressive for their past and their present and have been designated a UNESCO World Heritage site.

Why Were The Casemates Du Bock Built?

To guess why this tunnel system was created, just look at where Luxembourg is located in Europe and consider its violent history.

Luxembourg is surrounded by what is now Germany, Belgium, and France. Soldiers from these larger countries trampled its hills and valleys during countless invasions over many centuries. Little Luxembourg desperately needed a way to defend itself. Way back in 963, Count Siegfried spied the high, rocky promontory and ordered fortifications built on top of it. The fortress eventually boasted a ring wall and other defensive additions.

Over the centuries, the fortress changed hands again and again. Luxembourg City’s rulers included the Holy Roman Emperors, the House of Burgundy, the Habsburgs, the French and Spanish kings, and finally the Prussians. The busy builders of these empires produced three fortified rings with 24 forts and other strong defensive systems, including tunnels.

The Casemates du Bock that stretch for 14 miles under the fortress date to 1644 and are the product of Spanish and French ingenuity. The Austrians added more tunnels in the 1700s. The original intent was to use the casemates as fortified gun emplacements. The underground tunnels became a vital part of the defense system, with their 25 portals for cannons. The various deep and wide tunnels also served as a barracks for hundreds of soldiers and their horses and housed kitchens, bakeries, and workshops.

The combination of defense works both above and below the ground was so impressive that Luxembourg was dubbed the Gibraltar of the North. But due to a neutrality treaty in 1867, the fortress was more or less demolished. The task was obviously too difficult to complete, because today you can see the remaining walls and marvel at the ruined parts of the fortresses popping up along the roads and greenery of Luxembourg City. Even the expenditure of 1.5 million gold francs didn’t quite get the job done.

What You’ll See When You Visit

Today, visitors can wander through all the open tunnel passages, an extensive network of main thoroughfares and small, dead-end offshoots. The casemates were dug out on different levels, and some are as far as 130 feet below the surface. About 10.5 miles worth of winding, dirt-floored passages and stairs are open to the public. These are the sections under the fortress that couldn’t be destroyed without causing parts of the city to cave in. They were sealed up and left intact, and were later reopened in 1933. During World War II, the tunnels were used as a bomb shelter.

As you explore the Casemates du Bock, imagine all the soldiers and civilians who once walked these tunnels. Look out the slots made for cannons and let your mind take you back to the days when battles raged and armies attacked the fortress above. Then think about the 35,000 civilians who took shelter there during the air raids of the 1940s.

Decide How You Want To Handle The Hills

The hills leading up to the fortress ruins and casemates entrance are steep. You can park along the road up to the top or in the parking lot at the bottom of the hill, but if someone with you has any issues walking up hills, you can drop them off at the top and go back down to find parking. I huffed and puffed my way up, and then found that the walk down was delightful. All along the road you’ll see old stone walls and gates, some with etched dates, which makes for a fascinating venture. You’ll also be rewarded with stunning views of the city, and if you look back up the hill, you’ll see the towers and brick walls of the fortress from a different perspective.

Check Out The Fortress Ruins Before Heading Underground

Start aboveground at the Chemin de la Corniche, a balcony of stone along the river with a view of Luxembourg City. The ruins of the fortress, including the Corniche, give you a 360-degree view of the city, green canyons and park areas, and other buildings of historic interest. Stand on the ramparts of the fortress and take time to study the medieval layout of the city directly below. Modern and sleek Luxembourg City lies just beyond. The juxtaposition of old and new is a remarkable sight. Then head to the entrance to the casemates and buy your ticket.

Bring Your Own Lighting

From the entrance under the fortress, you’ll go through a turnstile, and then you’ll be on your own to go as far as you’d like. Fortunately, electricity has been added, along with some stair rails, but it’s still dim. Use your phone’s flashlight or bring a small battery-powered flashlight to see where you are going in the darker areas. If a passage ends at a rock wall, turn around, head back where you came from, and try another passage. It’s all part of the fun of exploring!

Pop In And Out To Enjoy The Vistas

You can go as far as you want for as long as you want (during open hours). Several openings to the outside allow you to pop out and enjoy the views of the city and the river, and then go back inside. The way to find these openings is literally to look for the light at the end of a tunnel.

Check Out The Archeological Crypt

One chamber in the Casemates du Bock is the archeological Crypt. This historic monument allows you to view the origins of Luxembourg City. You can also learn more about the efforts to preserve and protect the remains of the fortress.

Go Even If You Only Have An Hour

While you could spend all day venturing through the tunnels, if you only have a short time, you can still get a good feel for this underground world. Do allow at least an hour to explore the casemates and fortress ruins.

Think About Booking A Tour

One option for your visit is to book a tour. If the history of Luxembourg fascinates you, this would be a good way to hear more about the centuries of events in the city and the different countries that invaded it. And if you feel more comfortable with a guide in a rather dark tunnel, a tour would be a good choice.

The Casemates du Bock stand out among the many castles and fortresses of Europe. You will certainly find a trip through these historic tunnels memorable as well as enjoyable. 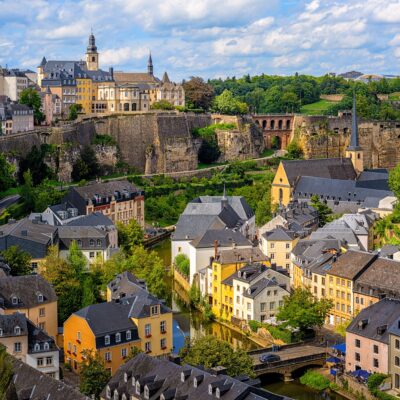 Luxembourg7 Reasons To Put Luxembourg On Your Bucket List