5 Great National Parks Near Phoenix To Visit In The Winter

Phoenix is the perfect winter destination, with its clear blue skies and moderate temperatures. It’s no wonder visitors flock to the city, many of them to stay the whole winter. Affectionately nicknamed snowbirds, many retirees even move to Greater Phoenix, part of the Valley of the Sun, to get away from the freezing temperatures, snow, and ice of their hometowns.

Getting away from the cold need not mean sitting in one place, though. While Greater Phoenix itself has plenty to offer, with world-class museums and desert trails in town, the city is also surrounded by national parks worth a visit. And I am not just talking about the Grand Canyon. Everyone who visits Arizona will take a trip to see this wonder of the world. But much closer to Phoenix, lesser-known national parks offer great day trips without subjecting the adventurous to colder temperatures or long drives.

These National Parks are all within two hours driving distance from Phoenix. They showcase high and low desert environments and boast perfect weather in the winter. These are the parks that you would avoid in the heat of the summer, but as temperatures get cooler, being outdoors in these spots becomes a joy. You might even see desert flowers dotting the landscape of one of the greenest deserts in the world (when you visit in winter, you’ll notice this). Whether you choose to visit significant archeological sites or enjoy unspoiled Arizona nature, these parks offer the best of both experiences all winter long.

About an hour’s drive from Phoenix, Casa Grande Ruins National Monument makes a great day trip from the city, giving its visitors a glimpse into the lives of the early inhabitants of the Sonoran desert.

Built by the Ancestral Sonoran Desert People sometime around 1300 A.D., the site features the largest prehistoric structures built in the Southwest: Casa Grande, or Big House, which the site is named for. The oral history of the O’Odham people, the modern-day descendants of those who built these structures, confirms that Casa Grande was a ceremonial center. Built at the crossroads of an intensive system of irrigation canals, it also served as a trading center for the surrounding ancient villages.

You can learn all about the history of these ancient people and their way of life in this hostile environment by visiting the indoor museum at the visitor center. Then walk outside and follow the trail through a few smaller structures and visit the highlight of the site, the Great House, Sivan Vah’Ki.

The self-guided tour is a short, easy walk around the ruins. But in the winter, from November to April, you can join an hour-long guided tour led by a park ranger. Though you can’t enter the Great House even with the tour due to safety precautions, you’ll learn a lot about the area and its history. Before leaving, don’t forget to walk over to the Ball Court on the other side of the parking lot.

About a 1.5-hour drive from Phoenix, Montezuma Castle National Monument has nothing to do with the Montezuma most of us are familiar with. Its name is a misnomer. Its first Western visitors, who could not imagine anyone other than the legendary Aztec king building such a “castle,” called it Montezuma. But the site is neither a castle nor the ancient home of a king.

One of the best-preserved in the Southwest, featuring 20 rooms, the five-story cliff dwelling was actually home to an entire village of indigenous people. Called Sinagua by the Spanish, (which means “without water”) these people lived and built a civilization in this harsh environment. Although no natural river was flowing at the site, the Sinagua weren’t actually without water. Instead, they built a canal around the site to bring in enough water for the village.

The short, paved interpretive trail takes visitors to the monument on a winding path to the cliff dwelling and the canal, which is shaded by mature sycamore trees. A winter visit offers not only pleasant weather but also a chance to see water flowing through the ancient canal.

About a 20-minute drive from Montezuma Castle, Montezuma Well is an oasis — a geological marvel of the desert. The sinkhole, created over 10,000 years ago, looks like a huge bowl filled with water. A short trail from the ranger station leads to the well. If you’re up for some stairs, you can also take the side trails off the main loop closer to the water.

About two hours from Phoenix, Tuzigoot National Monument is a perfect winter day-trip destination. Hot and exposed in the summer, the pleasant temperatures in the winter help visitors enjoy this ancient pueblo sitting on a hilltop in the high deserts of Arizona.

The ancient village, built and inhabited by the same Sinagua people of Montezuma Castle, was a farming community, housing around 250 people at one time. With the oldest structure dating from 1000 A.D., the site features 97 ground-level rooms.

The museum showcases artifacts excavated at the site in the 1930s. Start your visit there to learn about the people who built these structures and lived here thousands of years ago. Then follow the paved interpretive trail through Tuzigoot Pueblo and Tavasci Marsh.

If you visit Tuzigoot and Montezuma Castle in November, you’ll also have an opportunity to witness indigenous cultural events. Native American Heritage Month is celebrated at both sites as they host cultural events and indigenous arts and crafts shows each weekend of the month.

Visiting Tuzigoot or Montezuma Well during the winter months — between September and May — also offers opportunities for bird walks led by park rangers and interpreters for those interested.

About two hours from Phoenix, Tonto National Monument showcases two Salado cliff dwellings in the Sonoran Desert. Tonto’s inhabitants were a mixed people who archaeologists now refer to as the Salado.

Around 700 A.D., the Sonoran Desert people from around Phoenix settled here and mixed with the local population. Later, between 1100 and 1150 A.D., the Ancestral Puebloans and Mogollon people migrated and also settled here. The result was a cultural melting pot of several thousand people that led to a distinct culture.

The Salado built the two dwellings of Tonto overlooking the Rio Salado (and, now, Roosevelt Lake) around 1300 A.D. For the next half a century, their agricultural community thrived there, but as the climate became arid by the end of the 1300s, life became increasingly difficult, and the Salado left by 1450.

Start your visit at the monument’s newly remodeled museum, which showcases artifacts from the site. Then take the self-guided tour of the Lower Cliff Dwelling. The 1.5-mile trail is paved, but steep, and it takes about one hour round-trip. To visit the Upper Cliff Dwellings, you need to join a guided tour, offered in the winter season from January to April.

Showcasing the nation’s largest cactus, the symbol of the American West, Saguaro National Park is a two-hour drive from Phoenix, right by the city of Tucson. With temperatures ranging in the 70s and 80s, winter is the perfect time to visit this desert park and enjoy walks among the giant cacti. With over 150 miles of designated trails, you can find one to hike no matter your fitness level.

Separated by the city of Tucson, Saguaro National Park has two districts, Saguaro East and West.

The East or Rincon Mountains District offers a scenic drive called the Cactus Forest Loop Drive, which offers amazing views of the Rincon Mountains. Take the short one-mile loop hike along the Freeman Homestead Interpretive Trail to an old homestead foundation and wander among a grove of large saguaros and a cool desert wash — a seasonal dry riverbed. During heavy rainstorms, water flows through desert washes, often turning them into fast and relatively deep rivers. But as soon as the rain stops, the water dries up. A few days later, the only sign of there ever having been water in a wash is the area’s vegetation, which is greener than its surroundings.

If you are there at the right time, you might see great horned owls along this trail. If you’re up for a slightly longer hike, take the Hope Camp and Ridgeview Trail. At two miles long and 400 feet elevation, it’s still relatively easy to hike. Panoramic views of Rincon Peak and the surrounding saguaro-filled desert reward you for your effort. Wildflowers might add to the view in late November or February through March, and after a rainy day, you’ll see quite a few waterfalls along the trail.

The West or Red Hills Tucson Mountain District has its own separate visitor center that offers a great orientation program that presents the Native American perspective of the giant saguaro. One of the easiest hikes on this side, the Valley View Overlook Trail, starts at the Bajada Loop and offers views of the Avra Valley and distant mountains. The Signal Hill Picnic Area offers views of hundreds of ancient petroglyphs.

If you hike in the desert at any of these sites, remember to carry water, wear a hat, and use sunscreen. Even if the weather seems perfect, with temperatures in the mid to high 70s, you are still in the dry desert, where it’s easy to get dehydrated and the sun is strong even in the winter.

Planning an Arizona getaway? In addition to penciling in your national park visits, here’s how to spend a day in Mesa. 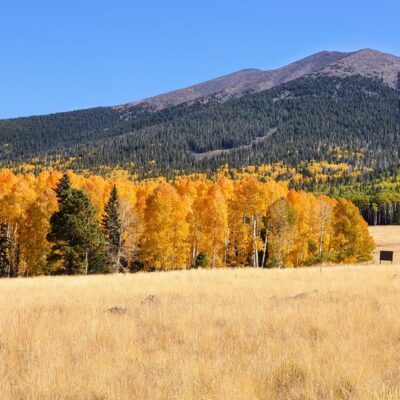 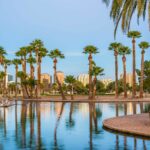 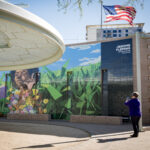 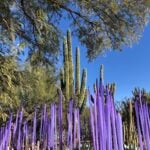