How To Swim With Thousands Of Golden Jellyfish In Palau, Micronesia

Jellyfish Lake offers you an experience you might not have thought possible — you can swim with nearly a million golden jellyfish.

These beauties can’t sting you, and they don’t mind your company as long as you tread lightly.

Where Is Jellyfish Lake?

Eil Malk Island, the home of the golden jellyfish, is an otherwise uninhabited rock island south of the city of Koror in Palau — a country of over 500 islands in the Pacific Ocean. The lake the jellyfish live in is one of 70 bodies of salt water that were once one with the ocean, but are now independent lakes.

Jellyfish Lake itself is small — it’s less than a quarter-mile long and is about 100 feet deep.

Jellyfish Lake is a part of the Koror State Rock Island Southern Lagoon, which is a UNESCO World Heritage Site.

Jellyfish Lake is home to 630,000 Mastigias papua etpisoni — or, as we know them, golden jellyfish — as of December 2018. It’s likely that number has continued to rise since then.

The lake once had between 10 and 20 million jellyfish, and the population even skyrocketed to 30 million in 2005.

By 2016, the number dropped drastically as a result of El Nino. The rise in water temperature caused a decrease in algae, which the jellies rely on.

Unfortunately, human interference also played a role in drastic drops in the jellyfish population. Certain ingredients in sunscreen polluted the lake water and killed many of these magnificent creatures.

Why It Closed, And Why It’s Open Again

To protect this rare, stunning subspecies, the Republic of Palau intervened and closed the lake in May of 2017 to all visitors, minus scientists.

Scientists closely monitored the population of jellies, and after a period of steady growth, Palau opened its doors (or rather, tourist boats) to visitors in early 2019.

Yes, You Can Swim With Them

We have good news for you! These jellyfish can’t harm humans. The jellyfish don’t sting, so it’s completely safe to swim and interact with them up close.

Each day, the jellies migrate from the west side of the lake to the east side to follow the sunlight, which sustains them. During your dip, you can swim in that direction with them, or go against the grain.

The lake is pretty small, so it won’t take you long to swim around, but you can stay and enjoy the cool critters for as long as you’d like. You can even touch the jellies as long as you’re gentle!

How To Get To The Island

The easiest way to reach the lake is through the city of Koror. If you want to travel into Palau International Airport, which is the closest airport to Koror, popular hubs are in Australia, New Zealand, and the Philippines.

You can’t reach the island on your own, so plan your visit in advance by booking an island tour or visit to Jellyfish Lake and neighboring islands.

There are two things you should know before you go: Swimmers can only wear certain approved sunscreens in the lake, and there’s absolutely no scuba diving allowed. About 75 feet below the surface, there’s a layer of bacteria that protects the lake’s shallower waters from a toxic hydrogen sulfide below. To prevent contact with the bottom layer, scuba diving is off limits.

The Republic of Palau takes conservation seriously, so to protect its wildlife, the government has implemented an eco-pledge for all incoming visitors.

To enter the country, visitors must read the Palau Pledge and sign it. The pledge consists of five stanzas. The most poignant line: “I vow to tread lightly, act kindly, and explore mindfully.”

If you plan to visit, we encourage you to do just that. Jellyfish Lake is a sight to see, and in order to enjoy it, you need to protect yourself, protect the jellyfish, and protect the beauty of Palau.

Want to witness more adorable animals in stunning habitats? Here’s how to visit the spa-loving snow monkeys in Nagano, Japan. Touring the South Pacific in search of the cutest critters? Here’s where to see sugar gliders in the wild. 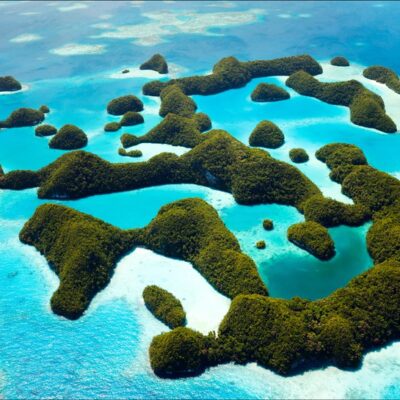 PalauPalau: Why This Is The Perfect Time To Visit