15 Fantastic Things To Do During A Long Weekend In Beautiful Sheridan, Wyoming

Beautiful Sheridan, Wyoming, sits in the Goose Creek Valley at the foot of the Bighorn Mountains. Interstate 90 and U.S. Highway 14 intersect in the north central Wyoming city.

Highway 14 is the Black and Yellow Trail because it connects the Black Hills and Mount Rushmore to Yellowstone National Park’s northern entrance near Cody. Sheridan is halfway between them. However, Sheridan is not just a place to stop between those well-known destinations. Sheridan’s scenery and Western heritage make it worth exploring.

Pro Tip: Explore Interstate 25 and 90 from Cheyenne to Sheridan.

Sheridan’s location at the base of the Bighorns and its ringside seat to the history of the American West make it a compelling place to visit. Culture and cuisine flourish here in all seasons.

In the spring of 1882, George Loucks envisioned Sheridan from a hill above Goose Creek. He returned to his cabin and drew the town’s plat. He named the town for his Civil War commander, General Philip Sheridan. After the Cheyenne land office registered the plat, he became the town’s first postmaster and first mayor.

Things To Do In Sheridan

Even tenderfeet can dress like cowhands with help from downtown Sheridan. King’s Saddlery should be your first stop. The store has two parts. The front building outfits cowboys and cowgirls.

Cross the alley in the back to the Don King Museum. The partially-accessible building holds every imaginable saddle style, mixed with a sleigh, stagecoach, horse-drawn hearse, and taxidermy heads, including a giraffe. The top floor displays two saddle-making tool collections, but beware of the low beam above the staircase.

The WYO Theater started as the Lotus in 1923, but it closed in 1982. Sheridan’s citizens rescued their Art Deco treasure and renovated it. The theater now holds live theater, concerts, and the annual WYO Film Festival.

The Public Arts Committee requested sculpture proposals nationwide in 2001. The committee selected eight of the 60 proposed artworks. The city now displays more than 100 permanent works plus loaned sculptures. The loaners are available for purchase.

Pro Tip: Start the Horned Toad Scavenger Hunt at the WYO Theater. Then find the rest with help from the Brinton Museum’s information desk. Fill out the map with each toad’s name. The toad is the Wyoming state reptile, but horned toads are actually lizards.

Rancher John B. Kendrick started Trail End in 1908, but he had little time to enjoy his new home. In 1914, a year after the Flemish Revival-style house’s completion, Kendrick became the Wyoming governor and moved to Cheyenne. Then he moved to Washington, D.C., 2 years later as one of Wyoming’s senators.

Trail End is Wyoming’s only known Flemish Revival building. Most of the items in the house are original, like the master bedroom’s Circassian walnut furniture. The house sits on 3.8 acres with a sunken rose garden, orchard, tennis court, and a variety of native and exotic trees and bushes.

Bradford Brinton turned his Quarter Circle A Ranch into an art museum in the early 1900s — while he lived there. He knew many artists personally and collected a range of genres. Now the ranch is the Brinton Museum. The in-house collection includes Edward Borein, Charles M. Russell, and Frank Tenney Johnson. Look for local artist Hans Kleiber’s Brinton Gardens.

More treasures occupy the Ted and Katie Meredith Gallery of Western Art and the Goelet and Edith Gallatin Collection of American Indian Art.

Dine on the Brinton Bistro’s porch for unobstructed Bighorn Mountain views when weather permits. The restaurant grows its own vegetables. Look over the raised beds between ordering and your meal’s arrival. Start your meal with pinzimonio, a vegetable medley tossed in red wine garlic vinaigrette. We also recommend the Bradford Brinton Burger and the pulled pork.

Pro Tip: Tour the ranch house and outbuildings first, then walk the nature trails. Return to the Forrest E. Mars Jr. Building and eat at the bistro. Then enjoy the galleries on the building’s lower floors. The museum is in Big Horn, 15 miles south of Sheridan.

If you want to be a cowboy, you need to ride in a rodeo — or at least watch one. The Sheridan WYO Rodeo is one of America’s best. You just haven’t visited Wyoming without the WYO.

For a different equestrian sport in Big Horn, watch polo, the sport of kings. Two clubs, Flying H and Big Horn, play. The region is known for its high-quality polo horses, so the players are both local and international.

Pro Tip: Learn polo terms and rules in this guide.

Lake DeSmet, half an hour south of Sheridan, is best for ice and troll fishing.

If you have three or more fishing days, pack into the Cloud Peak Wilderness (PDF) in the Bighorn National Forest two hours west of Sheridan. It’s home to 10 trout species. Before you go, submit the registration form.

Pro Tip: Learn the latest fishing news at Fly Shop of the Bighorns in downtown Sheridan.

10. Three Battlefields And A Fort

Instead, the warriors stopped General George Crook at the Battle of the Rosebud on June 17, 1876. Afterward, Crook withdrew to a campsite along Goose Creek in present-day Sheridan. The Crook Campaign Fountain is in Mill Park.

The Tsisistas named the battle “Where the Girl Saved Her Brother” because Buffalo Calf Road Woman had rescued her wounded brother.

The battlefield is now a Montana state park an hour north of Sheridan.

The Rosebud victory ensured that Crook could not reinforce Lieutenant Colonel George Custer 8 days later at the Battle of Little Bighorn an hour northwest of Sheridan. The warriors wiped out Custer’s immediate command and decimated the Seventh Cavalry’s remainder. Oral tradition says that Road Woman knocked Custer from his horse.

Before Little Bighorn, the Fetterman Massacre was the Army’s worst defeat at Native hands. The Lakota, Tsisistas, and Hinono’eiteen (Arapaho) named it the Battle of the Hundred in the Hand.

Carrington commanded Fort Phil Kearny on the Bozeman Trail. The warriors resisted so strongly that the government had to close the trail. The fort and the Fetterman Monument are half an hour south of Sheridan.

Pro Tip: Walk the interpretive trail before sunset to watch the sun go down and city lights come on.

Where To Eat In Sheridan

Hang out at breweries, bars, and a pizzeria in Sheridan.

Don’t think of visiting Sheridan without drinking at the Mint Bar. 9,000 brands are burned into the wall, and you must examine the neon cowboy outside.

Do you think about German food when you visit a pizzeria? We didn’t either. But it’s delicious. Want some fire? Eat the Bre and Brit Fire Hazard Pizza.

Where To Stay In Sheridan

William F. “Buffalo Bill” Cody turned the Sheridan Inn into his Wild West Show headquarters. It’s one of Wyoming’s most historic hotels. Famous guests like Ernest Hemingway stayed at the hotel. Each of the inn’s 22 rooms is named for important figures in Cody’s life.

The Moody family renovated a historic flour mill into a 42-room hotel. The Mill Inn is a one-of-a-kind hotel.

Pro Tip: For the maximum cowboy experience, stay at the 7,000-acre Eaton’s Ranch, 18 miles west of Sheridan. You won’t want to leave.

For more on Wyoming, explore these articles: 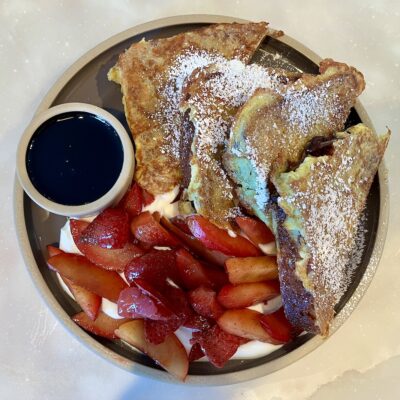 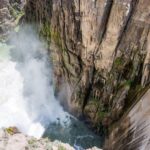 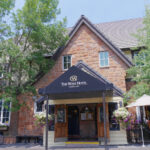 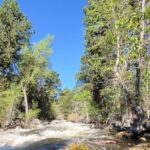 WyomingHow To Spend An Amazing Day In Beautiful Buffalo, Wyoming