A larger-than-normal black bear ripped its way into a sleeping family’s tent in Great Smoky Mountains National Park last weekend. The bear, which scratched a 3-year-old girl and her mother, was trapped and euthanized on Monday to prevent the risk of other interaction with humans.

Park officials say the smell of food probably attracted the bear to the campsite. The girl’s father eventually scared it away.

“The bear weighed approximately 350 pounds, which is not standard for this time of year, suggesting the bear had previous and likely consistent access to non-natural food sources,” Lisa McInnis, Great Smoky Mountains National Park’s chief of resource management, said in a statement. “In this incident, the bear was likely attracted to food smells throughout the area, including dog food at the involved campsite. It is very difficult to deter this learned behavior and, as in this case, the result can lead to an unacceptable risk to people.”

How The Incident Unfolded

A family of five people and their dog were sleeping in a tent at Great Smoky Mountains’ Elkmont Campground, a 200-site camping area about 8 miles from Gatlinburg, Tennessee, on June 12.

At approximately 5:20 a.m., the bear ripped its way into the family’s tent and scratched the girl and her mother, according to the National Park Service.

After several attempts, the father was able to scare the bear from the tent and campsite. The family left a note at the campground office to report the incident and left the campground to seek medical attention.

The mother and daughter “sustained superficial lacerations to their heads,” park officials explain.

Why The Bear Was Euthanized

The campground hosts notified park officials of the incident at approximately 8:50 a.m.

Park rangers responded to the site, closed the immediate area to maintain safety, interviewed the father of the family as well as other campers, and collected information such as bear tracks that could be used to identify the bear. Park staff then monitored the site for bear activity and set traps in the area.

“A male bear, matching the physical description of the involved bear, entered the campsite where the incident had occurred. The bear exhibited extreme food-conditioned behavior and lack of fear of humans, boldly entering the trap without wariness,” the National Park Service explains. “Based on a match with physical measurements and descriptors, along with observed bear behavior, biologists successfully matched and identified the responsible bear.”

Although the bear’s behavior appeared to be inconsistent with predatory behavior, it was euthanized on Monday because it posed a safety risk to humans.

How To Protect Yourself — And The Bears

Black bears in the Smokies may be 6 feet in length and be up to 3 feet high at the shoulder. During the summer, a typical adult male bear weighs approximately 250 pounds while adult females are generally smaller and weigh slightly over 100 pounds. By the fall, however, the bears may double their weight as they prepare for winter.

It’s important to note that “bear management is really people management,” the National Park Service explains. “How visitors behave while in the park has an impact on the safety of bears. If you are careless with your food or litter, YOU may be responsible for a bear’s death!”

Park management has taken numerous steps to make it easy for visitors to protect the park’s bears. For example, bear proof dumpsters or trash cans are located in all campgrounds and picnic areas. Park officials urge visitors to use those receptacles so garbage and litter doesn’t attract bears.

When in bear country, visitors should never store food in tents. Instead, food — as well as scented items like toothpaste — should be properly stored in a hard-sided, bear-resistant container.

You can learn more about black bears in Great Smoky Mountains National Park, including how visitors can help keep bears safe, here.

Be sure to read our coverage of Great Smoky Mountains and the rest of the United States’ national parks. 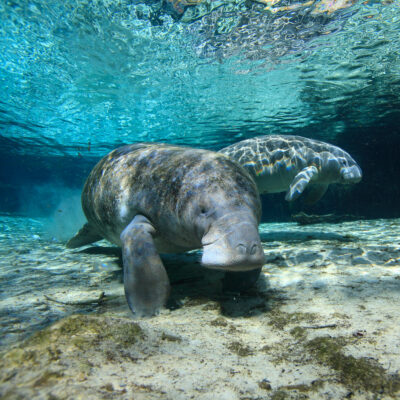