Why This Is My Favorite Lesser-Known European City To Visit

If I told you about a European city that’s clad in cobblestones and filled with history, one that is part cozy and part chic, where art galleries compete for sidewalk space with tiny wine bars, you’d be forgiven for thinking I was talking about Paris or maybe Prague. But the dreamy destination in question is Plovdiv!

This mid-size city of about 350,000 people in southern Bulgaria is my secret sweet spot in Europe. Wildly affordable and easy to get around, with the most charming old town I’ve ever seen and a bustling, vibrant city center, Plovdiv is an absolute delight. In 2019, it was a European Capital of Culture and visitors only benefit from the revitalization of artistic programs and improved infrastructure that comes from such an appointment.

Getting here is easy. On my first visit, I took the bus up from Istanbul (which was clean, comfortable, and came with free snacks, a combination that never fails to win over my heart). On my second visit (which was part of a press trip), I flew into Sofia, Bulgaria’s capital, and then took local transport to Plovdiv. Sofia is well connected to western and eastern Europe by train and, from there, you can easily get to Plovdiv on a regional train or bus.

Here are some of the attractions and experiences I recommend for anyone lucky enough to visit Plovdiv.

The Roman Amphitheatre Of Philippopolis

Sometimes I wonder if Plovdiv is trying to give Rome a run for its money. After all, Plovdiv boasts seven hills just like the Italian capital does. And while it may not have as many ancient amphitheaters, it certainly has the best. The Roman Amphitheatre of Philippopolis is an incredible structure that dates to the 1st century (likely between 86 and 91 A.D.). It’s one of the world’s best-preserved Roman theaters (being hidden until 1972 when a landslide revealed it didn’t hurt). But the real bragging rights here? It’s still in use! Concerts and plays are frequently staged here, and the venue is also used for awards presentations and even as a venue to record albums.

While Plovdiv’s Roman amphitheater is high on atmosphere, with gorgeous views from its hilltop position in the old town, the city’s Roman Stadium has an entirely different vibe going on. It’s fresh and hip and in the center of all the action from its position in the city center. Sunk in the middle of a major pedestrian street, parts of this once mighty structure that could accommodate some 30,000 spectators still remain hidden. I think it’s remarkable that you can be busily going about your shopping and sightseeing and there’s this amazing piece of architecture from Hadrian’s 2nd-century reign just hanging out in the middle of everything. I think this is why Plovdiv is such a relaxed, approachable city. Its past is incorporated into everyday life and nothing is untouchable.

Rayko Daskalov Street and Knyaz Aleksandar I Street comprise the “Glavnata,” stretching 1.1 miles long. Together, they are the longest pedestrian street in Europe. The Roman Stadium (above) is situated in the middle of it. Walking up and down Glavnata was a highlight of my last visit to Plovdiv. There was so much awesome people watching! Plus there are pretty parks and spots to sit, great cafes and gelato shops, and plenty of shopping. (Foodie friends will want to know that my favorite shawarma/donair shop was right off Glavnata, tucked beside a flashy burger bar known as Hesburger at Knyaz Alexander I #37).

Perhaps no place demonstrates how Plovdiv mixes the old and new better than the Trakart Cultural Center. Located by a modern pedestrian underpass and a Roman road (complete with chariot ruts) and tucked in beside ordinary shops, this cultural center is home to gorgeous Roman floor mosaics along with other artifacts. You can even “walk” over the mosaics thanks to a glass floor that hovers just above the remarkable art.

The Romans weren’t the only powerhouses in town. Hindlian House was once owned by merchant Stepan Hindlian, and its opulent interior showcase’s his influence in overseas trade. It’s worth a visit just to take in the lusciously decorated ceilings! There are opulent pieces of furniture, art, and textiles dating to the mid-1800s, as well as a pretty courtyard.

Considering that Plovdiv has made such a splash for being named a European Capital of Culture, a visit to the Ethnographic Museum to learn a bit more about that culture is a good choice. Here you’ll find folk costumes, musical instruments, and tools related to traditional crafts ranging from winemaking to rose distillation. It’s well worth spending an hour or two here (or even more on a rainy day).

On my most recent visit to Plovdiv, I saw no fewer than five active archeological digs, and I suspect I’d have discovered much more had the time allowed. Plovdiv’s Archaeological Museum is a good place to start to learn more about what’s going on with all these digs and to see some 60,000 artifacts, including pottery, jewelry, and religious iconography.

Plovdiv is a city of art — in galleries and shops, churches and museums. Your visit will be greatly enriched if you make a stop at the Philippopolis Art Center early in your trip to pick up a little knowledge of Bulgarian art (assuming you’re like me, that is — I knew nothing before my visit and I’m glad I went!). This is the first private art gallery in Bulgaria, and it specializes in masterpieces of classical Bulgarian Revival art. The building is a work of art in and of itself, located in a restored mansion dating to 1865.

Pro Tip: You’ll see the name “Philippopolis” a lot, as this was the city’s name for most of its history. “Plovdiv” didn’t gain widespread use in English until World War I.

Church Of St Constantine And Helena

Believed to be the oldest church in the city, the first structure on this site to honor St Constantine and his mother dates back to 337 A.D. The building you see today dates to 1832 and is famous for its frescos and icons. If you’re accustomed to the ornate churches of western Europe, you’ll be intrigued by this church’s unique style. It’s both very plain (the outside, in particular, is rather rustic) and opulent at the same time. Inside, you’ll find Baroque art and gold gilding.

Filled with gardens, gazebos, fountains, and monuments, this pretty public garden in the heart of Plovdiv is just steps away from such bureaucratic stops as the central post office but feels like its own world. Keep an eye out for two of my favorite pieces of sculpture: a plump bear and a pair of young deer. However, for most people, the highlight is the “singing fountain,” a large pool where jets spout water in sync with music and lights.

This is the part of Plovdiv I’m most interested in checking out on my next visit. This part of the city is in transition, as the gorgeous, ghostly old tobacco warehouses are finding new life as public spaces. During my 2018 visit, when Plovdiv was preparing to celebrate being a European Capital of Culture, some of the old warehouses were being used as temporary artistic venues. There was a time when several of these stately old buildings were threatened, but locals rallied to save them, and I can’t wait to see what’s in store for their future.

Kapana translates to “The Trap,”  but if you ask me, it also translates to a good time. Kapana is the name of a district well known for its tight streets and fun bars. You’ll also find cute cafes, cool little shops, and great nooks to enjoy local wine. Ask for recommendations at your hotel. Hangouts here are always changing and falling in and out of favor, so it’s best to get a recommendation while on the ground.

I have not one but two strong accommodation recommendations for Plovdiv. The first is Villa Antica, a small, comfortable boutique hotel that’s just a few steps away from all the action at Glavnata but remains quiet at night. The spacious rooms are full of personality, and breakfast is served next door in a cafe. But the best thing of all is Villa Antica’s neighbor! The hotel is across the street from the Roman Odeon, an ancient ruin that is currently undergoing restoration.

The other is Hostel Old Plovdiv. This charming property in the center of Plovdiv’s cobblestone-clad old town is really more like a guesthouse than a hostel. I stayed in a huge private room and shared a small bathroom with one other room across the hall. My room featured antique furniture and came complete with a bouquet of dried lavender on my pillow. Swoon! 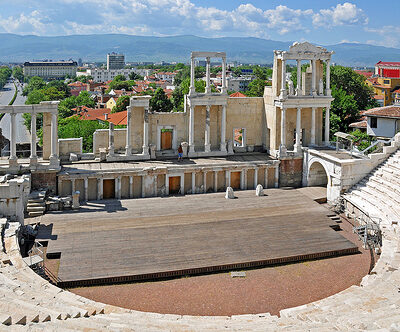 BulgariaEurope’s 2019 Capital of Culture, Plovdiv, Launches A Year of Programing