12 Fantastic Things To Do On Beautiful Jekyll Island, Georgia

Whether you’re looking for beach fun, natural wonders, or historic treasures, Jekyll Island is your kind of place. I’ve visited it many times and love the mixture it offers. Its beaches are unique and there are remnants of its history. The most widely known are the “cottages” and clubhouse of the millionaires who bought this island for their playground in 1886. The same things that attracted the Vanderbilts and Rockefellers are here for us to enjoy today. And more.

I was comped admission to the Landmark Trolley Tour, Mosaic, and Sea Turtle Rescue Center, but opinions are my own.

Pro Tip: You’ll pay an $8 toll to enter Jekyll either in advance or at the tollbooth.

Mosaic tells the history of Jekyll from the Timucuans, who were here when the first white men arrived, to more modern history like the first transcontinental telephone call on January 25, 1915. Four locations participated in that call. Alexander Graham Bell was in New York. His former assistant, Thomas Watson, was in San Francisco. AT&T President Theodore Vail spoke from Jekyll Island, and President Woodrow Wilson was at the White House.

Several exhibits tell the story of The Wanderer, the last large slave ship. Exhibits tell how the island became the Jekyll Island Club, owned by 100 of America’s wealthiest elite. No one entered the island unless they were a member, a guest of a member, or an employee.

Pro Tip: You purchase and board the trolly here.

The tour takes you through the historic section. The driver gives you earbuds to hear the story clearly. My driver was Amanda, who did a fantastic job. You’ll hear the history as you drive past some of its most memorable buildings.

DuBignon Cottage, built in 1884 by John Eugene DuBignon, the island’s owner prior to the club ownership, is a simpler Victorian-style home than the more elaborate cottages built by members of the Jekyll Island Club.

Crane Cottage, built between 1917 and 1919, is the largest, most expensive cottage. Richard Teller Crane, Jr, owner of Crane plumbing fixtures, copied a European castle with this 20-bedroom, 17 baths winter retreat. Amanda told us, “When he sent in the plans to the club for approval, they refused, saying it was too elaborate for their ‘simplistic tradition.’” He accommodated by replacing the proposed marble flooring with wood. It’s now part of the Jekyll Island Club Resort with 13 rooms. Not surprisingly, it is the most elaborate of the cottage rooms with its sunken garden, courtyard, and soothing fountains.

J. P. Morgan and five other club members built Sans Souci as one of the country’s first condominiums. They divided each of the three floors into two apartments. Sans Souci is French for “no worries.” Today, it is part of the resort and has 24 guestrooms.

The trolley tour takes you inside Indian Mound, originally built by Gordon McKay in 1892. After McKay’s death, William Rockefeller bought it. It was originally much smaller. Rockefeller expanded it to nine bedrooms, nine bathrooms, and seven servant rooms. He added an elevator, a cedar-lined walk-in safe, and taps for hot and cold saltwater on the bathtub in Mrs. Rockefeller’s bath. Amanda explained both the Rockefellers had medical issues. Mrs. Rockefeller had neuropathy and believed bathing in saltwater helped relieve it.

Amanda talked about the furnishing and family stories. It’s the simple things like the hat and hairbrush sitting on the dresser in Mrs. Rockefeller’s room, and the doll and tricycle in the grandchildren’s room that gives you a feeling of what life was like for some of the richest people in America.

There are 34 historic structures on the 240-acre site, set among southern live oaks including about a 375-year-old plantation oak. The trolley tour takes you past many of them. At your leisure, wander and explore later. Some are still undergoing restoration; others are open.

Smaller homes in the area where servants lived are now shops and restaurants like the Commissary with plenty of local Georgia food items. During the club era, it was the general store.

The Clubhouse is the island’s ultimate structure. Its majestic turret rivals the moss-covered ancient oaks that surround it. The turret is part of your room if you stay in the Presidential Suite. Charles A. Alexander built the Queen Anne-style hotel in 1888. As the club became busier, it added an annex in 1901. Golf eventually replaced hunting as the main sport on the island. In 1898, members built the island’s first golf course. Today, it’s Georgia’s largest public golf resort with four courses: Great Dunes, Indian Mound, Oleander, and Pine Lakes courses.

The Federal Reserve Bank began at the Jekyll Island Club on November 22, 1910. Senator Nelson Aldrich, chairman of the National Monetary Commission, A.P. Andrews, Assistant Secretary of the Treasury, and five other influential millionaires met in a secret meeting held at night at the Clubhouse. They used only first names so no one could learn their identities and leak them to the press.

If you stay at the Clubhouse, you access your room via stairways with polished wood balustrades and enter the room, with its heart pine floors, using a brass key, as did original club members. You can sit in a rocker on the wide, covered porches and watch golfers putting on the lawn as you sip a no “egrets” martini or a Jekyll sunset from The Bar.

The Trolley Tour also includes a history tour ofFaith Chapel. You can visit for free earlier, but from 12 p.m. to 4 p.m. there is a docent who tells the chapel’s history. The rear of the chapel has one of the most famous Tiffany windows, “David Set Singers Before the Lord.” It’s celebrating its 100th birthday this year.

Georgia’s only sea turtle education and rehabilitation facility thrills nature lovers. It’s housed in what was the power plant building. It’s a cross between a museum and a turtle hospital. Turtles have thrived since the time of the dinosaurs but could become endangered by today’s careless boaters, reckless drivers, and lighting that directs hatchlings away from, instead of, into the ocean. You learn about the different kinds of turtles and tortoises.

The best part is in the rehabilitation section behind the main building. There you meet injured turtles who are being treated. I met Bandit, a young green turtle, who was struck by a boat. He has been here 7 months and probably won’t be returned to the wild because of hind flipper paralysis caused by the injury. Margoi, an adult loggerhead found near Jacksonville, has a better chance of returning to the sea. She had anemia due to leeches and infected wounds.

Pro Tip: There are several other programs such as camps and beach turtle walks.

There’s a lot to see outside the historic district. Drive Beachview Drive (it turns to Riverview Dr. by the campground) to visit the oldest structure on the island and one of the oldest tabby buildings in Georgia. William Horton, the first owner of the island, built it in 1743.

The DuBignon Family, which owned Jekyll from 1790 to 1886, lived there from 1790 until the mid-1800s. Just across the street is the cemetery where the DuBignon family is buried.

Jekyll Island has seven designated beach areas. St. Andrews Beach Park is on the marsh side. The most unusual one is Driftwood Beach. You walk through a tunnel of low-hanging trees and scrub bushes and then step into a view, unlike any other beach in the world. Ancient driftwood, scattered along the sand, form unearthly shapes like giant petrified sculptures.

The other beaches are more conventional. All are beautiful stretches, with white sand protected by dunes.

Pro Tip: Dogs are allowed but must be leashed.

Beach Village is located between the Horton House and the Historic Section by Corsair Beach Park. There’s plenty of parking in front on Main Street. You can drive into the first section on Main Street, but the section nearest the beach is walk-only. There’s a greenway with The Westin Hotel on the right and shopping and dining on the left. You’ll find dining places like Sweet Georgia’s Juke Joint and Wee Pub here.

Wanderer Memory Trail tells the story of America’s last known slave ship, The Wanderer. The trail, filled with informational plaques, follows the banks of the Jekyll River near where The Wanderer landed 160-years-ago.

Jekyll Island is golden in more ways than name. Visit to see for yourself.

Pro Tip: Jekyll Island is about an hour’s drive from Savannah or Jacksonville International Airports.

Other Georgia sites to consider are: 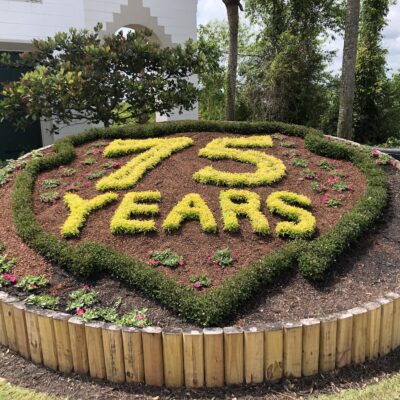 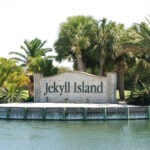