Karen Warren
What Are Your 2023 Travel Plans?

Epirus is the perfect destination if you love Greece but don’t want to share your vacation with lots of other tourists. Known as “Greece’s best-kept secret,” it is ideal for slow travel, with beautiful countryside, gastronomy to die for, and some amazing archaeological sites.

I was in Greece as a guest of the Programme of Tourism Promotion of Epirus, a new project designed to showcase the Cultural Route of Epirus, which links the sites of five ancient theaters to create a tour around the classical world. However, I soon realized that the region is about much more than archaeology: This is the real Greece, a place where people live and work, but where tourists are welcome and well catered to.

Epirus is in the northwest corner of Greece, with the Ionian coast and Corfu to the west, and Albania to the north. You can fly to the international airport at Preveza from many European countries. Alternatively, take a domestic flight from Athens to Preveza or Ioannina, or hop on a ferry from Corfu.

Pro Tip: Although there are some bus routes, the easiest way to get around is by hiring a car. The roads are good, and it is possible to drive from Athens to Epirus in 4-5 hours.

The Theatre of Dodona, around 12 miles from Ioannina, is one of the sites on the Cultural Route of Epirus. At 72 feet in diameter, this was the largest theater of ancient Greece and could accommodate more than 15,000 people. It was built in the 3rd century BCE to reflect the power and grandeur of King Pyrrhus (who is, unfortunately, better known today for the term “pyrrhic victory”).

The site — which happens to be set in some stunning countryside — is open year round. You can explore the remains of the theater, and fragments of the ancient town. Dodona was also the home of the god Zeus, and the location of an important oracle, second only to Delphi in significance. It is still considered a sacred place: perhaps you will pick up some of the spiritual vibes as you walk around!

Note that, as with all the archaeological sites in the area, there is a certain amount of walking up slopes and on uneven ground. It should be possible to explore Dodona in an hour or two.

2. Exploring The Roman Town Of Nikopolis

Nikopolis, 5 miles from Preveza, was perhaps my favorite place in Epirus, simply because there was so much to see. Another stop on the Cultural Route, Nikopolis is not Greek, but Roman, built by the emperor Octavian in 31 BCE to celebrate an important naval victory.

Much of the town remains unexcavated, but there is still plenty for tourists to see. The most impressive part is the former walled city, which was inhabited until the 6th century and contains remains of Christian basilicas with magnificent mosaic floors. You’ll also see fragments of roads, walls and villas, and examples of Roman plumbing.

Elsewhere in Nikopolis are a well-preserved Odeon (small theater) and the site of Octavian’s Victory Monument, with sweeping views over the countryside and the sea. The main theater is still being excavated, but it is hoped that it will be open to visitors in 2022.

The different sections of Nikopolis are some distance apart, so you will need a car (or a bike, if you are feeling energetic) to move between them. Returning to Preveza, you could also visit the Archaeological Museum of Nikopolis, which is full of historical information and artifacts.

Allow half a day to explore the site, perhaps as part of a full day in Preveza including a visit to the museum.

Pro Tip: To get a flavor of Roman theater-going, try to visit during the Preveza Festival, which takes place each year between June and September. Some performances take place in the Odeon of Nikopolis.

3. Chilling Out In Preveza

The seaside town of Preveza is primarily a place to relax, with a large yacht marina and long sandy beaches north of the town. However, you will want to explore the old town with its famous alleys. These are a series of tiny streets full of shops and restaurants, and buildings from the Byzantine and Venetian periods.

If you want to do a bit of sightseeing, there are three castles in Preveza, including the Venetian Pantocrator Castle. There is also an art gallery and several museums.

4. Discovering The Historic Town Of Arta

Although Arta does have some small archaeological sites, including one of the theaters of the Cultural Route, many visitors will find the medieval and Byzantine town more interesting. At the center of the town is the Byzantine Castle of Arta, built in the 13th century and surrounded by a wall with two tall towers.

One of the main attractions of Arta is its Byzantine churches. I visited the church of Panagia Parigoritissa, which is unremarkable on the outside, but the interior contains some magnificent medieval wall paintings. As you leave the church, don’t miss the Refectory to the side of the church, which contains a display of Byzantine artifacts.

A short distance from the town is the Bridge of Arta, a 17th-century Ottoman bridge made famous by a ballad telling a gruesome legend. It is said that, while the bridge was being built, each day’s work would fall down overnight, a pattern that continued until the chief mason’s wife was sacrificed and her head buried in the bridge… Fortunately, whatever the truth of the story, today the bridge is just a pleasant spot to stop and enjoy the view.

You should be able to explore Arta comfortably in a single day.

5. Walking Around The Old Town And Lake Of Ioannina

Ioannina is the main town of Epirus and is primarily a convenient base for exploring rather than a tourist center. However, you may want to spend some time in the Kastro, the 6th-century citadel. This small walled area encloses the streets of the old town and includes some ancient buildings such as the Fethiye Mosque.

Just beyond the Kastro is Lake Pamvotida, a large expanse of water with an inhabited — but unnamed — island at its center. You can walk or cycle around the lake, or take a boat trip to the tranquil and car-free island with its fishing port, monasteries, and centuries of history.

6. Enjoying The Gastronomy Of Epirus

Epirus may not be primarily a tourist area, but there is no shortage of restaurants where you can enjoy the local cuisine. This is based on very fresh, local ingredients: the emphasis is on the quality of the ingredients rather than on elaborate dishes. Look out for the local olive oil, which is often organic, and always of high quality, the vegetables (especially the fresh wild greens), and the citrus fruit.

Fish lovers will find a whole range of locally landed fish, including some species unknown outside the region, and the giant shrimp are a specialty. Meat is mostly lamb from local sheep. Most restaurants will cater to vegetarians, with fresh vegetables, cheeses, and pastries (my favorite was lachanopites, a pastry stuffed with wild greens).

Wine is plentiful, and you will also spot people drinking the local tsipouro. This is a clear spirit, which comes in small bottles, and can be drunk at any stage of a meal.

Pro Tips: It is easy enough to find tourist staples such as kebabs or moussaka. However, you’ll enjoy the food more if you seek out local restaurants with simple, regional specialties. Slow food is the rule in Epirus. People often eat just one main meal a day, with several courses spread over two or three hours.

7. Getting Out Into The Countryside

The countryside is beautiful and — at least in autumn when I visited — surprisingly verdant. Everywhere you go, you are surrounded by tall tree-covered mountains. There are large lakes and rivers, many crossed by ancient stone bridges. This is an agricultural region, with citrus trees and olive groves, and the occasional vineyard where you can enjoy a tasting.

Serious hikers could tackle parts of the 230-mile Epirus Trail, a cross-regional mountain route. However, there are lots of other hiking trails for all abilities, from short easy walks to longer treks. An added bonus is that Epirus is on a major bird migration route, with opportunities to spot rare species both on the coast and inland.

Pro Tip: Epirus describes itself as a year-round destination. However, you need to know that there is abundant rainfall in autumn, and it can be snowy in winter. On the other hand, all those trees must make a spectacular autumn display! Epirus could be a good choice for a summer break in Greece because it is less visited by tourists, and the mountains make it cooler than southern destinations. However, my choice for a return visit would be spring, when the whole place is covered with flowers. 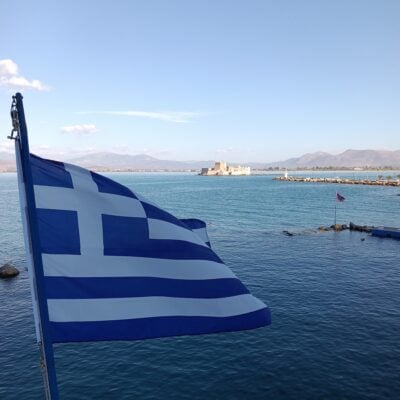