Beyond Pisa: 7 Other Italian Leaning Towers Worth A Visit

When I travel, I often do so with a theme. For example, I try to find the best wine bars in a location, or the cutest museums, or the best sunsets. On one of my many trips to Italy, the “theme” was leaning towers. Who hasn’t heard of the most famous one, the leaning tower of the beautiful city of Pisa? But, as I discovered, there are several more leaning towers all over Italy, in such spectacular places as Rome, Venice, and Bologna.

Whatever the reason, these towers, most of them bell towers, aren’t standing up straight, whereas churches and palaces are, is a puzzle. Still, all of them are worth a visit and so are the cities they stand in. And yes, all of them, as inclined as they may be and sinking deeper every year, are still standing and waiting for you to take a look and wonder at their resilience.

Rome, Italy’s capital, may have countless monuments and sights that keep you busy with sightseeing for days on end, but take a few minutes to visit Rome’s very own leaning tower. Torre delle Milizie is a 12th-century fortified tower located between Trajan’s Market and the Imperial Forum. It passed through the ownership of many powerful Roman families. At a height of 164 feet, the tower is visible from many points in the city. Expanded and fortified in the 13th century, the tower equals the Castel Sant’Angelo in importance. It’s one of the most important medieval fortresses of the city. Often nicknamed Nero’s Tower, it is believed that the emperor watched the great fire of Rome (64 A.D.) from this location, although at the time it was an ancient Roman construction near the Gardens of Maecenas. More reliable sources place the emperor as watching outside the city from Antium.

In 1348, an earthquake caused the top two floors of the tower to collapse. The same earthquake was the reason that the tower tilted, but at such a minor angle that you have to look from afar to even notice the inclination at all. However, sinking foundations are bound to increase the angle over time. In 1911, the tower was declared an Italian National Monument.

2. The Two Towers Of Bologna

Two leaning towers are the landmark of Bologna, the capital of the Emilia-Romagna region in the north of Italy. The twin towers, constructed between 1109 and 1119, are called y m and Garisenda, respectively. They were built by two families of the same name who were in fierce competition as to who was the more powerful. Asinelli is the smaller of the two. Originally, a wooden structure surrounded the tower, which was connected by an aerial footbridge to Garisenda, but that structure was destroyed in a fire in 1398. Garisenda, the taller tower, is also the more leaning one. They are located at the intersection of the roads leading to the five gates in the old city wall. Lightning, fires, and sinking soil caused the precarious leaning of the towers. They have been made famous in literature, too, with Dante, Goethe, and Dickens being three of the authors who were impressed by the towers. It is also thought that architect Minoru Yamasaki was inspired by the towers when designing the World Trade Center in the 1960s. A wooden spiral staircase inside degli Asinelli leads to the top and a spectacular view over Bologna. If you want to really see the towers (inside and out) and surroundings and learn all about the history, your best bet is a guided, private tour, which takes two hours.

Caorle is located in the Veneto region of Italy, near Venice, between the estuaries of the Livenza and Lemene rivers. It’s a lively seaside town on the Adriatic Sea with a long beach, offering plenty of family activities during the summer. Caorle is practically an island, where the church and bell tower seem to loom out of the water. The cathedral of Santo Stefano was built in 1038 and is an example of Romanesque and Byzantine-Ravennate style. The interior features a painting of the Last Supper, done by Gregorio Lazzarini, the master of Tiepolo. The cathedral also owns a liturgical museum, if you are interested in that kind of art.

The 137-foot-high bell tower, built in 1048, is unique in the world because of its age and shape. It’s the only still-standing example of a cylinder-shaped bell tower with a conic cusp in the world. Despite its age, the tower, which leans at 1.4 degrees, only started slanting after 1920. The reasons, however, are unknown. You can stop and look at this unique tower on your way to Venice where you will find a few more leaning towers.

Built on a muddy lagoon with inadequate foundations, studies have shown that the city of Venice is sinking at a rate of one to two millimeters per year. It’s hardly a surprise that Venice has her share of leaning towers. San Giorgio dei Greci is a Greek orthodox church that was built between 1587 and 1592 by the Greek community of Venice. The bell tower dates from 1592 and started leaning right from the beginning of construction. The inclination can best be seen from the Bridge of Sighs. One of Venice’s most famous bridges, it was built at the beginning of the 17th century, spanning the Rio di Palazzo and connecting the old prison at the Doge’s Palace with a new one across the river. Those who crossed the bridge were most likely facing a long time of incarceration, hence the name.

The church of Santo Stefano was built between the 13th and 15th centuries. The bell tower dates from 1544. The church, with its fine interior, houses, among other works of art, Tintoretto’s famous Last Supper, and is located near Ponte dell’Accademia in the district of San Marco. This famous bridge is one of only four spanning the Grand Canal. The current wooden structure opened in 1933. You are well advised to remember the location of the bridge if you stay in Venice for some time because it’s an important stop for the vaporetto (water buses) that take you around Venice and to the islands in the lagoon.

The church features a unique ship’s keel roof. It’s one of the highest bell towers in Venice at 216 feet. The inclination of the tower is similar to the one in Pisa — that is to say approximately six feet. To visit San Stefano and other monuments in Venice, it’s best to go on a tour conducted by locals.

Despite being named “basilica,” this church dating from the 16th century is only of minor importance, overshadowed by the cathedral of San Marco. Remarkable, however, is its bell tower, which is one of the most precarious and fragile in Venice.

7. Church Tower On The Island Of Burano, Venice

Burano is an island in the northern Venice Lagoon. It’s famous for its colorful houses and the making of fine lace. Old ladies sit at their doorsteps or in small shops and display their skills with nimble fingers. There is a pretty museum and school of lace making, well worth a visit. It’s located in Piazza Galuppi. Although the neighboring island of Murano is more famous for glassblowing, there are glassblowers on Burano, too. Stop by Arte Fuga, a small shop that sells glass trinkets made in-house. To give you a sugar boost during all that walking around the multi-colored Burano streets, treat yourself to the local sweet called Bussola. Next to Burano lies the small island of Mazzorbo. It’s connected by a wooden bridge and a pleasure to walk along. On Mazzorbo, you find many artichoke fields and fruit trees as well as vineyards. If possible, take the time to visit the Venissa estate and sample their special wine, made from a rediscovered ancient grape.

Burano is easily reached from Venice by water taxi or ferry. On the island, the 16th-century San Martino Church is abated by a 173-foot-high bell tower, which is leaning precariously to one side. It’s interesting to see the reflection of the church and tower in one of the many narrow waterways that crisscross Burano just as the canals in Venice do. 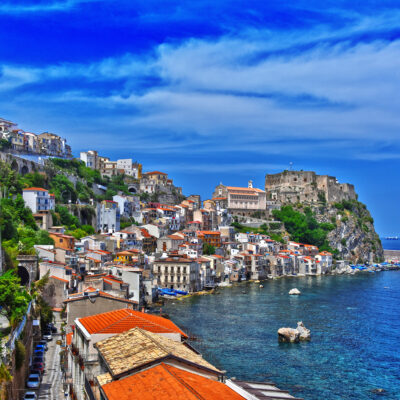 Italy7 Reasons To Fall In Love With Beautiful Calabria, Italy

ItalyWhat Is Prosciutto? Everything You Need To Know