5 Reasons Why Tucson, Arizona Is A Bicycling Paradise

From smooth asphalt to desert dirt, and from green suburban parks to stands of towering saguaros, Tucson, Arizona, has just about anything a bicyclist could be looking for when it comes to conditions and views.

Hundreds of miles of trails — both paved for a flat, even road ride, and rugged and steep for an exhilarating mountain bike ride — crisscross and surround the southern Arizona community.

In fact, the quality and variety of Tucson’s bike trails regularly land the city on lists of the best places to cycle in the United States. In early 2021, Tucson’s popular Chuck Huckelberry Loop earned the distinction of being named the number-one recreational bike trail in the country by USA Today.

Touting the city’s famously sunny weather, its rugged mountain ranges, and its pristine paved trails, the Visit Tucson tourism website says that “it’s no wonder Tucson is consistently ranked as one of the top U.S. cycling cities.”

For me, there’s no more enjoyable way to get around the busy city than to hop on a bike and zip along the super-smooth paved trails, taking advantage of the handy underpasses to avoid car traffic along the way.

Based on my experiences on Tucson’s trails, as well as information from the community’s tourism website, here are five reasons why Tucson is a paradise for bicyclists.

1. You Can Get Almost Anywhere On A Bike

Home to the sprawling University of Arizona campus, Tucson is a natural place for bicycling. And virtually everywhere you look in the city, you’re likely to see people out on their bikes — on leisurely rides with their families or commuting to jobs or classes.

The variety of trail surfaces ensures that almost anyone can find an appropriate cycling experience. With the countless opportunities for both mountain biking and road biking available, Visit Tucson notes that “riders of all levels can easily get their fix.”

In 2018, the city was listed in the top five of America’s best places for bikes by the PeopleForBikes website. Among large cities in the U.S., Tucson was number two, behind Portland, Oregon. Overall, Tucson ranked as number five, behind Fort Collins, Colorado; Wausau, Wisconsin; Boulder, Colorado; and Portland, Oregon. The website defines a great bike town as a place where you want to ride for fun, not just for practicality.

Tucson’s trails live up to that standard, offering interconnected routes that take cyclists easily from neighborhood to neighborhood. Not only is the connectivity handy for locals, who can easily commute, but it’s also great for visitors who want to leave their cars behind and take in the warm desert air.

Along the way, the network also connects the communities of Tucson, Marana, Oro Valley, and South Tucson.

The paved path offers dozens of access points throughout the metro area. It provides spaces not just for bikes, but for walkers, runners, skaters, and horseback riders as well. The Loop is also the site of annual cycling events such as the Loop the Loop, which kicks off the El Tour de Tucson season in September.

In February of 2021, USA Today announced its 10Best awards for the year, and the Chuck Huckelberry Loop was listed as the number-one recreational trail in the country.

The Loop is made up of a series of shorter trail sections. Either by themselves or in combination with other Loop sections, several of these shorter trails are worth checking out.

The trail originated with a flood control effort, after the Santa Cruz River flooded out nearby communities in the early 1980s. Today, the trails that run along both sides of the mostly dry riverbed are used for both flood control and recreational purposes.

The Santa Cruz River Park Trail also takes in a part of the Juan Bautista de Anza National Historic Trail, a system that follows a historic route taken by de Anza on his 1775 journey to establish a fort in California’s San Francisco Bay area.

Known for its sweeping views of the nearby Santa Catalina Mountains, the Cañada del Oro River Park Trail runs for 11 miles through Tucson’s northern suburbs Marana and Oro Valley.

Along its route, the trail passes by commercial retail centers, as well as the Pima Community College’s Northwest Campus.

A portion of the trail is called the Christina-Taylor Green Memorial River Park in honor of one of the victims of the January 2011 shooting at a Congress on Your Corner event held by Congresswoman Gabrielle Giffords. Park improvements include a shaded plaza, a bronze statue surrounded by a butterfly garden, botanical trails, benches, and a butterfly sculpture.

For nearly 22 miles, the paved Rillito River Park Trail runs along both sides of its namesake river. The trail, which connects with the Santa Cruz River Park Trail, is a magnet for families looking for an easy ride on the mostly flat route.

The trail passes by a number of shops and restaurants, making it a convenient route for a longer outing. The Rillito River Park Trail also features regular stops with drinking fountains, restrooms, and exercise stations.

Showcasing the natural attributes of the Sonoran Desert, the Julian Wash Greenway runs for 18 miles from the Santa Cruz River Park Trail near South Tucson to the southeastern corner of the city.

Along the way, the trail features views of the distant mountain ranges and desert terrain. It connects with several parks, including the Julian Wash Archaeological Park, which tells the story of the Hohokam people who once lived in the region.

For much of its route, the Julian Wash Greenway is paralleled by a soft-surface path for equestrians and joggers.

For those who want a quick and easy way to access the trails of Tucson, Tugo Bike Share offers rental access to 330 bikes at 41 stations spread over 13 of the city’s neighborhoods.

The bike share bills itself as a fun, flexible, and cost-effective way to navigate the city, whether you’re commuting, running errands, or sightseeing. The system offers rentals for one-way trips, full days, or unlimited 3-hour rides within a 24-hour period.

Street biking is not the only cycling option in the Tucson area. With its nearby ring of rugged mountains, as well as its iconic Saguaro National Park, Tucson has plenty of rugged single-track trails that regularly attract hordes of mountain bikers.

The Mountain Biking Project recommends 25 routes in the Tucson area, including the Honeybee Canyon Loop, a route recommended for beginners because of its fairly smooth surface; the Sweetwater Trail System, which includes a number of loops of varying difficulty levels through classic desert terrain; and the Golder Ranch Trail System, an 11.1-mile intermediate-to-difficult route that includes steep sections and sharp turns.

5. You Can Ride (Nearly) Year-Round

With more than 350 days of sunshine a year, Tucson is considered one of the sunniest cities in the U.S., and Visit Tucson emphasizes that point, noting that the community’s “seemingly endless supply of sunshine means that you’ll almost certainly have nice dry roads to travel.”

Of course, with all of that sunshine comes some pretty intense heat in the summer months. Although you could technically ride a bike throughout June, July, and August — and some people do — the 100-degree-plus temperatures can be dangerous and uncomfortable. Still, that leaves plenty of great cycling weather in the fall, winter, and spring.

Desert dwellers know that during the hot summer months, the early mornings and evenings are the best times for outdoor exercise. While Tucson’s average high temperatures rise to 100 degrees in June and July, and the mid-to-high 90s in August and September, the average lows drop to a more comfortable 70-degree range throughout the summer months. 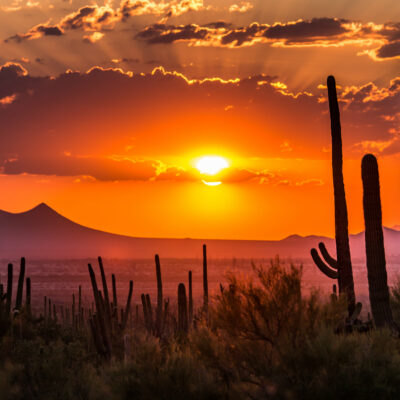 TucsonHow To Spend A Day In Tucson Arizona