The Best Things To Do In Richmond, VA: Where To Eat, Stay, And Play

Although the Mason-Dixon line is roughly 160 miles to the north, I’ve always felt that the South starts in Richmond. And as the Washington D.C. metro area continues to creep farther south into Northern Virginia, it feels more and more necessary to travel 100 miles from the nation’s capital to experience the history and culture that defines the South.

Saying this town of 230,000 has a rich history is as obvious as stating that the Chesapeake Bay is full of delicious seafood. For it was in Richmond that Patrick Henry exclaimed, “Give me liberty, or give me death!” in a passionate speech that fueled the American Revolution. When the nation’s bloodiest war broke out a century later, Richmond served as the Confederate States of America’s capital. And as part of the Black Lives Matter movement, a 60-foot-tall statue of Robert E. Lee on horseback was transformed from honoring the general who fought against emancipation to symbolizing Black freedom.

But Richmond has much more to offer visitors than its storied past. Bisected by the wide James River that winds its way to the Atlantic Coast and is surrounded by tall deciduous trees and fertile farmland, Virginia’s capital city offers a variety of outdoor activities. And the seafood-rich waters of the nearby Chesapeake Bay fuel a delicious food scene.

These are the best things to do in Richmond, Virginia, a destination with all of the attractions and amenities of a big city that’s kept its small-town charm.

Things To Do In Richmond

Things aren’t always black and white, and with the perspective provided by 2020, many people recognize the importance of learning from our past (rather than rewriting history) to continue to evolve and grow as a nation. With this goal in mind, the building that once supplied about half the Confederate Army’s artillery has been converted into a 30,000-square-foot museum dedicated to sharing multiple points of view about life in the South in the mid-1800s.

Pro Tip: History buffs will also want to visit the White House of the Confederacy. It served as the home of Jefferson Davis, the only president of the Confederate United States.

As the country continues to evolve and truly embrace the self-evident truth that we are all created equal, Richmond has taken the lead in removing statues honoring Confederate leaders. But today, Monument Avenue features more than the spray-painted pedestals that once held monuments to slave-owning secessionists on horses. At the intersection of Monument Avenue and Roseneath Road, look for the statue honoring Arthur Ashe, the native son who won three Grand Slam singles titles and was the first Black player selected to the United States Davis Cup team.

From Ancarrow’s Landing on the east side of Richmond to Huguenot Flatwater on the west, there are many places to enjoy James River Park. Watch for birds and other wildlife on a nature walk through the wetlands, hike to Belle Isle, or go for a bike ride in this lush green space that stretches the length of Richmond. If you’d rather be in or on the water, you can also swim, fish, canoe, kayak, and paddleboard at the park.

Although Richmond is Virginia’s third capital city, the white Roman-temple-style building designed by Thomas Jefferson is the first state capitol built after the Revolutionary War. In this building, the Bill of Rights was ratified, creating the first 10 amendments to the U.S. Constitution. You can explore the Virginia State Capitol on your own or via a 1-hour guided tour.

Stretching 50 miles from Williamsburg to Richmond, the Virginia Capital Trail is another great way to enjoy the state’s natural beauty. Rent a bike and see this stretch of Virginia along a relatively flat bike trail dotted with historical markers. Or, pack a picnic lunch and drive to one of six designated picnic areas where you can relax, nibble, and sip while the rest of the world glides by.

Pro Tip: Fill your picnic basket with the freshest locally sourced foods by visiting one of several Richmond farmers markets. The South of the James Market is open seasonally, rain or shine, from May through October on Saturdays at Bryan Park. If you’re more of a Sunday shopper, the Carytown Farmers Market is open May through November on Sundays at City Stadium.

On the north bank of the James River, the Maymont is a stone Victorian mansion surrounded by acres of trees and gardens. Tour the 12,000-square-foot gilded-age home filled with silk damask, embellished plasterwork, and brightly colored stained glass windows. But most notable is the swan bedroom with an elaborately carved swan bed. Then tour the Italian garden filled with flowers and fountains and watch orange koi swim under arched bridges in the Japanese garden.

About 10 miles north of the Maymont Mansion, the Lewis Ginter Botanical Garden is another beautiful outdoor spot in Richmond. Built around an impressive glass-domed conservatory, the garden offers more than 50 acres of well-manicured natural beauty year-round.

Perhaps because of the NFL team named after the dark-winged bird from one of his poems, I always associate Edgar Allan Poe with Baltimore. However, Poe was raised in Richmond after being orphaned at a young age. At the Poe Museum, learn more about the man who penned gloomy poems and spooky short stories that would set the stage for modern detective stories.

Art lovers visiting Richmond will want to explore the Virginia Museum of Fine Arts. With art and artifacts from every corner of the world, you’ll see everything from photographs by African-American artists to a Qur’anic writing tablet, a collection of hand-beaded Native American items, and portraits of famous Virginians. Admission to the Virginia Museum of Fine Arts is always free, and it’s open 365 days a year.

Visiting a cemetery may seem like an unusual vacation stop, but touring Hollywood Cemetery wraps up the city’s Civil War history and ties it with a black raven-embossed bow. Plus, the 2,000 native tulip poplars and white oak that shade the graves tucked into the rolling hills along the waterfront have earned it arboretum status. This is where you can find the final resting place of Jefferson Davis along with two U.S. presidents, James Monroe and John Tyler.

If you want to get up and get going, start your day with the best bagels in Virginia at Nate’s Bagels. Keep things simple with a bagel and cream cheese, or fill up for a great day of exploring with a breakfast bagel, veggie, or other specialty bagel sandwich.

Another great option to grab coffee and a quick bite in the morning (or a sweet treat later in the day) is Whisk, where buttery croissants, a rainbow of macarons, and other tasty items are baked fresh daily.

If you’re starting your day at Millie’s Diner, consider one of the signature messes. These three-egg, open-faced omelettes are topped with everything from andouille sausage and crawfish to spicy Italian sausage with a crown of melted cheddar. You don’t want to visit the South without enjoying the shrimp and grits, and Millie’s is one of the best places in Richmond for this classic Southern dish.

With French classics like baguette sandwiches, quiche, boeuf bourguignon, bouillabaisse, and profiteroles, Can Can Brasserie is a great spot for lunch, brunch, dinner, or dessert in Richmond.

Satisfy your sweet tooth with a trip to Pearl’s Bake Shoppe. In addition to everyday flavors that include chocolate, vanilla, and carrot cake, Pearl’s offers unique specialty and seasonal flavors like beignet, mint julep, and Virginia’s President. And if you’re traveling with a food allergy or dietary restriction, you’ll be glad to know that Pearl’s also has a selection of delicious gluten-free and vegan cupcakes each day.

Inspired by the art and architecture of the Renaissance, The Jefferson has provided elegant accommodations in Downtown Richmond since 1895. Several U.S. presidents, distinguished businessmen, and notable entertainers have admired the life-size statue of Thomas Jefferson in the lobby and enjoyed the hotel’s luxurious guest rooms over the years.

Once a block of row homes where Edgar Allan Poe lived as a child, the delightful green space in the Linden Row Inn’s courtyard is rumored to be the “enchanted garden” described in the poet’s famed work, “To Helen.” This 70-room boutique hotel offers guests modern amenities with classic southern hospitality.

For more modern accommodation in Downtown Richmond, check out Quirk Hotel Richmond. Since its opening in September 2015, this boutique hotel has seamlessly blended art, ambiance, sophistication, and Southern hospitality into a unique experience in Virginia’s capital city.

From its rich history to its natural beauty and delicious cuisine, there is plenty to see, do, and eat in Richmond. 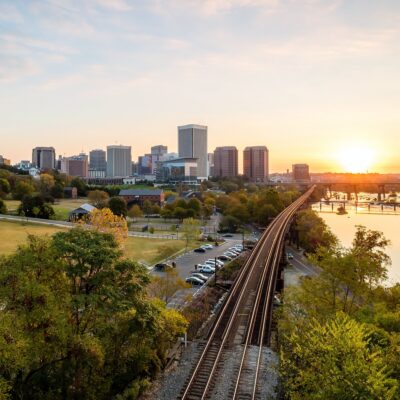 RichmondThe Best Things To Do In Richmond, VA: Where To Eat, Stay, And Play 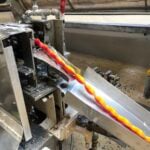 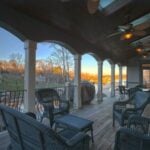 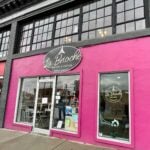