8 Incredible Experiences Not To Miss In Samoa

Samoa is in the South Pacific halfway between Hawaii and New Zealand. It is normally reached by flights from New Zealand, Fiji, Hawaii, and American Samoa, or there are direct flights from Australia’s east coast. With a population of roughly 198,000 mainly spread across two islands, Savai’i and Upolu, it’s easy for tourists to cover the main attractions and still have plenty of time to chill. There are resorts and day tours, but Samoa is not overly touristy. Despite the arrival of a McDonald’s in 1996, it has remained an uncommercialized island paradise.

Apia, the capital of Samoa, is a small, bustling city. There are substantial modern buildings, but Samoan society is tribal and family is everything. To understand more about the culture, visit the Cultural Village early in your stay. Rather than being a contrived or money-making experience, Samoans are so genuine about sharing Fa’a Samoa — ‘the Samoan Way.’ They offer this authentic, entertaining, and educational attraction for free. Here you begin to understand what you may have misconstrued about their culture. For example, the men with extensive tattoos circling their rugby-proud bodies (one in 17 local citizens are registered players).

At the Cultural Village, you learn of the beauty and pain behind those tattoos and how both male and female tattoos show readiness for adulthood and a young person’s maturity to be of service to their community. At the Cultural Centre, help build the umu (earth oven), weave your lunch plates, join in a kava ceremony, watch artisans, and enjoy Samoan music and dance displays. Tours are Tuesday to Friday from 10:30 a.m. to 12:30 p.m. next to The Samoa Tourism Visitor Information Fale.

Armed with more understanding, catch one of the local buses. There are no bus stops in Samoa, but you can board a bus at the main terminals, which in Apia, is behind the food market in Fugalei and opposite the flea market at Savalalo. Or, if you see one on the road, wave your hand palm down. Forget about the destination as this isn’t a commute — it’s an experience.

Each bus is unique, brightly colored, and totally pimped. Buses have names such as Blessings Transport and Jesus is the Way or Bon Jovi. Drivers leave when it suits them and knock off early depending on rugby games. Pop music blares at deafening volumes, and there’s plenty of fresh air as there’s no glass in the windows. To get off, knock on the ceiling or clap loudly, or with luck, there might be a cord to pull. You will be amidst happy laughing people all tumbling off each other’s knees. Pass through villages trailed by squealing pigs and barking dogs. Westerners will be directed to sit closest to the front unless offered a knee, which is highly likely. Locals know better than to sit near the speakers.

Young travelers often stay in fales on the beaches — traditional houses with no walls, offering the thrill of falling asleep to the sound of lapping waves. For travelers who want more creature comforts, a number of resorts replicate this experience except with a few more mod-cons such as air conditioning. Coconut Beach Resort has fales built on stilts directly over the ocean. We stayed at Aggie Greys, more recently rebuilt and rebranded as The Sheraton Samoa Aggie Grey’s Hotel and Bungalows. The hotel has a lot of American history as the founder, Aggie Grey (1897-1988), sold hotdogs and hamburgers to U.S. servicemen during WWII, and her hotel business grew from there. Author James A. Michener was stationed in the South Pacific, and his experiences shaped his 1948 Pulitzer prize-winning novel, Tales Of The South Pacific. Allegedly he partly based the character of Bloody Mary on Aggie. The character became even more famous after the Broadway musical and movie South Pacific adapted from Michener’s novel.

Even if you don’t have religious affiliations attending a Samoan church service is a wonderful way to immerse yourself in Samoan culture. It is an experience my daughter has never forgotten. Strongly influenced by 19th-century missionaries, the color white symbolizes a “pure heart.? The congregation is a sea of white as young girls wear white dresses, the women white hats, while the men are in lavalavas and white shirts. Apia’s churches are impressive, but even the village churches have beautiful craftsmanship and wonderful choirs. Ask at your hotel for service times and dress respectfully.

I had to chuckle at the Cultural Village when two female backpackers were asked to buy cheap lavalavas before entering. I overheard their grumbling over the idea that while entry was free, they were asked to make a purchase. I don’t think they realized they were supposed to put these over their cheeky short-shorts. Samoan society isn’t so much restrictive as respectful. At the resorts, you can wear what you like.

Robert Louis Stevenson, the author of Treasure Island, was born in Scotland but seeking a warmer climate due to declining health, he sailed to the South Seas. He visited many islands but in 1889 docked at Samoa and never left. He referred to the Samoans as “one of God’s sweetest creations” and took a keen interest in Samoan culture. He and his American wife, Fanny, built a Western-style mansion called Vailima with five bedrooms, a library, a ballroom, and the only fireplace in Samoa.

Samoans embraced his storytelling spirit naming him Tusitala, meaning “the teller of tales.” At his request, he was buried on Mount Vaea with “his boots on,” as he had used those boots to walk on the Samoan lands before he died in 1894, aged 44. Today, bibliophiles make pilgrimages to Vailima to see where the great author lived and wrote 13 of his 60 books. Vailima became home to the head of state but is now a house museum dedicated to the writer. Stevenson’s grave is a steep 30-minute trail up Mount Vaea — best climbed in the cool of the early morning.

Situated in the village of Taga on south-west Savai’i (an island reached on a 45-car ferry ride from Upolu where Apia is based) are blowholes created by lava flows making a series of tubes. These pipes lead up to a clifftop with the ocean below. Waves break against the lower end of the tubes compacting water at high-pressure until it geysers up hundreds of feet into the air through the tubes. Locals throw coconuts into the holes so they are blasted into the air plus, it’s a great way to crack a coconut.

To-Sua Ocean Trench is a geographical marvel and one of the most photographed spots in Samoa. The natural formation is a 100-feet-deep swimming hole formed by the collapse of an ancient lava tube system connected to the ocean. Thousands of years of erosion have made it into a beautiful swimming hole. As the descent is steep, it might be enough to take a photo from above, but many people also climb down the sturdy ladder to a platform and jump into the abyss for a refreshing one-of-a-kind swim.

Samoa is the epitome of a beach paradise with pristine aqua waters and palm trees angling over white sands. Lefaga Beach was featured in the 1953 Gary Cooper film, Return to Paradise, and you can also snorkel over giant clams here. Surfers enjoy the beaches and surf camps on Upolu’s south coast. Another unique experience is to swim with turtles in Savaii in a dedicated area where the water is not overly deep.

With an interior of steep volcanic mountains, Samoa has spectacular waterfalls. The Afu Aau Waterfall plunges into a deep swimming hole — a 10-minute walk, and you can have an idyllic cool swim. Papapapaitai Falls is one of the tallest waterfalls in Samoa at over 300 feet and is easily seen from the roadside. The Sopoaga is similarly easy to see and the prettiest of waterfalls with its dense jungle backdrop. But for immersive fun, the smaller waterfalls at Togitogiga offer plenty of space to swim while dipping in and under small waterfalls. Papase’ea sliding rocks are for the young and the young at heart. Thousands of years of running water have formed smooth rock slides. Shoot down; be in midair for a moment before splashing in for a landing. Often you will have these amazing places to yourself.

In Samoa, sharing a meal with others is an important aspect of the culture. Resorts such as Sheraton Samoa Beach Resort and Faofao Beach Fales hold a traditional Fia Fia once a week — a buffet of Samoan dishes, followed by a traditional dance and a fire knife performance. Oka is on the menu — freshly caught fish, cut into chunks (raw), marinated in lime juice (the citrus acid cooks the fish), then mixed with coconut cream. But mostly the dishes are cooked in the umu. Rocks and stones are heated on the earth by burning coconut husks. Food such as taro and bananas are placed in the stones, often wrapped in banana leaves. Palusami is coconut cream ladled into taro leaves and then baked in small parcels with other ingredients sometimes added, such as onion, fish, and meat. Banana leaves cover the top to seal the ‘oven.’

If you are fortunate, you may be invited to a family to’ona’i — the after-church feast family and friends share in that may run all afternoon. This is prepared early in the morning before church services and might include baked fish and other seafood (freshwater prawns, octopus, crabs, cooked in coconut milk), suckling pig, baked breadfruit, coconut cream-covered yams, bananas, palusami, salads, and curries.

The Samoan diet is rich in tropical fruit such as mangos, pineapples, papaya, pawpaw, and freshly shucked niu (coconut). You can buy these delightful fruits at the Fugalei Markets or from roadside stalls. Fruit is often served at breakfast, picked straight from the tree. After all, you are in paradise.

Pro Tip: In Samoa, many natural attractions are run by local families and/or villages, so there is a small fee, often as small as $5. 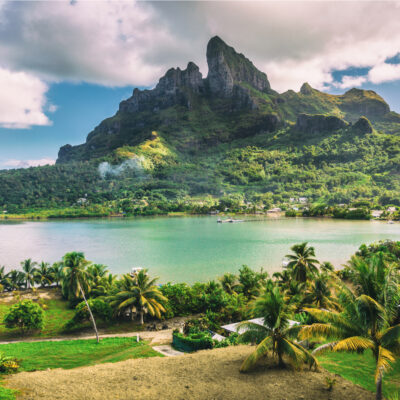