I live next door to the community of Almonte, Ontario, and I can attest to the fact that it is indeed an adorable holiday destination. Filled with inviting small bookstores, tempting bakeries, and cozy stores with 100-year-old floorboards, Almonte’s the perfect place if you need a drop-dead beautiful backdrop for a slightly corny Yuletide film. Best of all, visiting is easy. Whether you want to live your own real-life Hallmark moment in winter or desire a sweet small-town summer escape, Almonte delights all year round.

This community of about 5,000 people is less than 40 minutes from downtown Ottawa, Canada’s capital city. About two and a half hours from Montreal and four hours from Toronto, there are multiple airports within a short drive of this destination. However, you will need a car to get in and around Almonte as it’s underserved by public transit networks.

It’s impossible to explore Almonte without spending lots of time on Mill Street. And if you’re a made-for-TV movie mega fan, you’ve likely seen Almonte’s Mill Street multiple times on the small screen. Mill Street runs through the heart of the community and hosts sweet shops, restaurants, cafes, galleries, and more. As such, it appears in all films shot in the region, including Christmas Festival Of Ice.

Not many movies can brag about shooting in a museum as unique as the Mississippi Valley Textile Museum, but that’s exactly where Hallmark’s Unlocking Christmas and A Cheerful Christmas staged several key scenes. This funky space pays tribute to the history of the wool industry in the area and its impact on social, cultural, and industrial development. The museum also offers cool exhibits on fiber art and research materials for those studying industrial textiles.

The handsome Almonte Old Town Hall dates to 1885, but it’s constantly finding new fans thanks to multiple appearances in Hallmark movies. The building’s position next to the Mississippi River (the Canadian one, not the American one!) makes it especially picturesque. There’s a short, easy pedestrian pathway which starts next to the town hall and leads you on a walk along the river. Exploring the old town hall and the river path is one of the nicest ways to spend 30 minutes or so in Almonte.

The North Market cafe had a starring role in Christmas Around The Corner. For this Megan Follows-directed film (who Canadian TV fans will know for playing the title role in Anne of Green Gables), the cafe was transformed into the fictional “Fortenbury Books.” Naturally, it also transformed some hearts, pushing true love along the way like only a Christmas movie can. Non-movie stars can pop in here for breakfast tacos with four pepper sauce, lentil and roasted cauliflower salad with blue cheese, and curried egg salad sandwiches with dill and pickled beans.

This pretty flower and gift shop oozes romantic potential even when the Hallmark crew isn’t in town. In addition to flowers, they sell ornaments, blankets, Christmas novelties, bespoke toiletries, and home decor items. Just how cute is the inside? When A Cheerful Christmas filmed there, they loved the displays so much they didn’t change a thing.

2021 marks this retired Carleton Place train station’s centennial. That’s no small feat, considering that it’s the sole survivor of the seven Canadian Pacific Rail stations built from stone in the Ottawa Valley between 1897 and 1922. Lifetime fans love it for its appearance in Christmas Around The Corner, while architecture fans appreciate what the Canada’s Historic Places registry describes as “sophisticated massing and a fine sense of horizontal layering. The station’s deep-set windows and doors, and wide overhanging roofs give it a strong three-dimensional quality. The interior continues the fine sense of proportion, finish and detail, within a simple, elegant layout.”

Technically 30 minutes away in Pakenham, the Cedar Hill Christmas Tree Farm makes an appearance in multiple Hallmark, Lifetime, and other studios’ holiday movies. If you’re in the region before Christmas and in need of a tree, you can enjoy sledding, wagon rides, a bonfire, and hot chocolate while you ponder the perfect pick. Alas, they cannot guarantee that you’ll reunite with a long lost love or have an epiphany about what really matters in life while you’re there.

Editor’s Note: If you can’t make it up to Canada to visit these Hallmark towns, there are towns in Pennsylvania, Colorado, and West Virginia that sure feel like one.

Still looking to load up on holiday cheer? Lifetime’s The Christmas Setup recently wrapped filming in Almonte and other communities in the region, and it premieres this week. Starring real-life married couple Blake Lee and Ben Lewis, with Ellen Wong as the best friend and Fran Drescher as a matchmaking mom, The Christmas Setup breaks barriers as Lifetime’s very first LGBTQ themed Christmas romance. Director Pat Mills, a member of the LGBTQ community and former Ottawa resident, puts Almonte’s filming locations back in the spotlight once more. Now that you know the community, see how many Almonte landmarks you can spot! 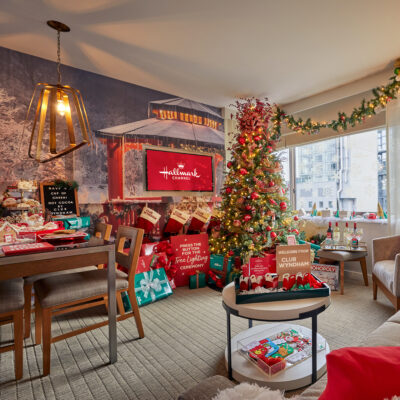 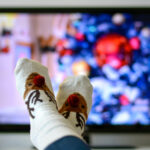 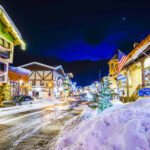