4 Iconic Windmills To Visit In Illinois

Perhaps my draw to windmills is because I am a farmer’s wife or simply that I love the outline of a beautiful windmill etched against the sky. There are amazing windmills in Illinois with wonderful stories. I am enamored especially with the Dutch-style mills used to grind grain. There are a few still in existence open to tour. These windmills are a history lesson, an architectural masterpiece, and in most situations, a town’s pride and joy with many hours of volunteer time. Come along, and visit windmills in Golden and Fulton, Illinois. Then take another day trip to Dwight to see the one-of-a-kind windmill that was part of the former Oughton Estate, then onto Geneva to see the beautiful Fabyan windmill.

Three windmills in Golden, Fulton, and Geneva are open in the spring through the early fall if you wish to go inside. (Although COVID-19 may affect hours and openings). Be aware that there are stairs requiring a bit of physical exertion, and care must be taken for these tours. The estate windmill at Dwight is only open to outside viewing and can be seen year-round. While the Golden, Fulton, and Geneva windmills offer nice drive-by views, the Dwight estate windmill requires a short walk for a good look.

The Prairie Mills Windmill is the only U.S.-built windmill operating with its original millstones and wood mechanism in downstate Illinois. It is a restored Dutch smock windmill and historic landmark in western Illinois. Located right off Highway 17, tour information is available on the website.

Arriving in the U.S. from Germany, HR Emminga came to Golden in February of 1852. By 1854 he completed his first windmill, the “Custom Mill” a mile northeast of town. After nine years, he sold the windmill to the John Franzen family, who milled it until 1930. They sold it to Henry Bruns, who operated it until 1934 when the windmill was destroyed.

H.H. Emminga returned to Germany, then five years later returned to Golden and built a two-stone windmill. By August of 1873, the windmill was complete, and milling operations commenced in September. A third millstone was added in August of 1874. Rather than take cash for milling, Emminga took grain, and used this grain to make and sell flour. His award-winning Prairie Mills flour was exported around the world!

The mill passed on to his son, HH, who, in 1889, implementing newer milling techniques. The Prairie Mills Windmill was still used to handle the other grains.

John Jacob Emminga took over operations in 1915, and in March of 1922, he joined F. B. Franzen (grandson of the original purchaser of the Custom Mill). Combining Prairie Mills and the Custom Mill, they formed Consolidated Cereal Company, which operated as a wind-powered mill until 1924 when a storm tore off two of the four sails. Then F.B. Franzen added a 30-horsepower gasoline engine to operate the mill. Consolidated Cereal Company continued to operate until 1930.

There were then several owners. The mill was used as a supper club, home, and tavern. The doors closed for good in the early 1980s and quickly deteriorated. Thankfully, in 1986, locals purchased the mill and began restoration. In 2002, they ground grain for the first time. Restoration was finished in 2004.

Besides the windmill, there is a neat museum as well.

Pro Tip: Outside the town of Industry is a little windmill building that used to be a restaurant. This fun stop fits in quite well with the windmill travel!

This Dutch-style windmill is on a flood-controlled dike on the Mississippi River in Fulton, Illinois. This is a newer windmill built and packaged in the Netherlands, then assembled by Dutch craftsmen.

Heading north on I-74, exit along the Great River Road to the river town of Fulton. Founded in 1834 by John Baker, the town was named after Robert Fulton, inventor of the steamboat. There is a museum, the Dutch Windmill Cultural Center, next to de Immigrant Windmill. Inside the cultural center, which was dedicated in April 2010, is a collection of 22 European windmill replicas. The windmills vary in size all the way up to 6 feet tall.

You can tour inside the windmill. Sadly, on the two visits I have made, the museum and windmill have been closed. I have only been able to access the 100-foot wooden windmill from the outside. Still, the windmill that was dedicated on May 6, 2000, to honor the Dutch settlers that originally settled in the area is beautiful. The walk around the windmill alone is worth the visit.

Pro Tip: In Fulton, Heritage Canyon is a 12-acre wooded nature walk with buildings that take visitors back to the 1800s. You can take a self-guided tour.

For years I saw the top of the Dwight Windmill from the Amtrak train when traveling from Springfield to Chicago. It was a treat to drive to the windmill at the end of Prairie Avenue in Dwight to see it in person! Historian Bob Ohlendorf met us and provided a tour of the windmill built in 1896. The original purpose was as the water system for the John R. Oughton estate. With funding from Major Curtis J. Judd, John Oughton and Dr. Leslie Keeley established the Keeley Institute, the first known treatment facility for alcoholism. “They treated 1,000 patients a week. Dwight had 28 hotels at one time,” Bob shared.

The Dwight windmill was built by the U.S. Wind Engine and Pump Company of Batavia, Illinois. The windmill has a steel frame covered by wood. Originally there were slate shingles, although they have been replaced by rubber ones today. The well is 840 feet deep, and the tower contains an 88-barrel Cypress tank at the top of the structure. “The windmill wheel is 16 feet across and weighs 2,000 lbs.,” Bob said.

The windmill has only been owned by two families. First was owned Oughton Estate, then ownership transferred to Bev and Mike Hogan. In December of 2001, the Hogan family donated the Windmill to the Village of Dwight. Today visitors can view this historic beauty in all its restored splendor!

Pro Tip: Next to the windmill is the Oughton Estate designed by Joliet Architect Julian Barnes. Also, the former Carriage House is now the Prairie Creek Library.

The Fabyan Windmill is part of the Kane County Forest Preserve. Located at Crissey Avenue in Geneva, Illinois, the Danish smock windmill was moved to its current location. The windmill is open from May 15 to October 15.

The Fabyan windmill was first built from a kit that included hand-cut cypress beams with hickory and maple gearing. Parts were shipped to Lombard and assembled on site by Louis Blakhaus near what is now Lombard, Illinois. The windmill was built between 1850 and 1860.

The windmill stands 68 feet and is five stories high. The mill has been used to grind wheat, buckwheat, and grain as feed for livestock for George Fabyan and his pet bear! Fabyan purchased the windmill after it had a few other owners in 1914 for around $8,000, then moved it to his estate called Riverbank.

George Fabyan had a new foundation creating a basement level. He added windows to the fourth floor and installed an oven in the basement to bake bread. After the deaths of the Fabyans in 1936 and 1939, the Forest Preserve District of Kane County purchased the estate, which included the windmill.

Pro Tip: On the Kane County Forest Preserve Grounds is the Fayban Estate and a Japanese garden open to tour!

You may also want to stop at the Batavia, Illinois, River Walk, where the Batavia Historical Society displays examples of windmills. Batavia has a history as a farm implement and windmill factory location, and the Riverwalk offers views of different kinds of windmills. Come to Illinois for your windmill fix and take a trip through time! 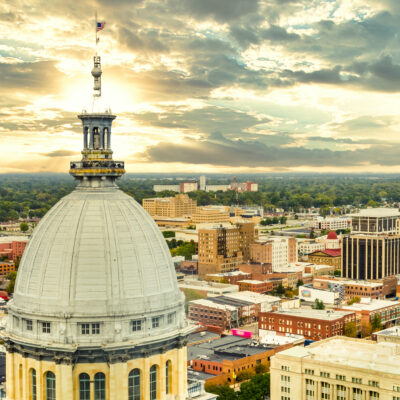 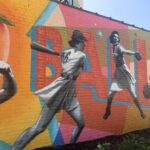 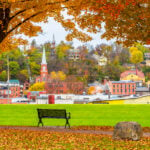 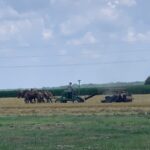