How To Spend An Amazing Day In Historic Winchester, England

Donna Janke
What Are Your 2022 Travel Plans?

Winchester is a historic market city in the heart of cider country in Hampshire, England. Once the capital of England, it began as a Roman town and was revived in the ninth century by King Alfred the Great. Today a statue of King Alfred sits prominently on The Broadway looking toward High Street and his castle. The city’s historic sites, bustling shopping streets, riverside walks, and traditional pubs and restaurants make it a fascinating place to visit.

Here’s how to spend a great day in historic Winchester.

Check Out The Medieval Gates

Winchester was at one time a fortified, walled city with several gates. Two gates remain. Kingsgate was first mentioned in documents in 1148. A small wood-beamed church occupies the upper level of the gate. The Church of St. Swithun-upon-Kingsgate has been a place of worship for more than 750 years. Churches built over city gates were common in medieval times, but only a few survive today.

Westgate, at the far end of High Street, stands on the site of a former Roman gate. The gate building once served as a debtors’ prison for 150 years. Today, the building houses the Westgate Museum. Museum displays include a famous collection of pre-imperial weights and measures and a painted ceiling dating to the 1550s. Note that there is a steep staircase and that the building is not wheelchair accessible.

Adorned with a dozen figures representing people associated with Winchester, the High Cross, also known as the City or Butter Cross, sits near one end of the pedestrian-only portion of High Street. Countrymen once sold produce in front of the 15th-century pinnacled market cross. Today’s well-preserved medieval High Street and its surrounding streets contain a mix of big-name brand stores and independent shops offering a variety of goods. A large variety of stores, historic buildings, and cobblestoned winding lanes combine to make wandering and browsing a delight. A number of the stone, brick, and timbered buildings date to the 16th and 17th centuries. Look for the town clock mounted on the side of a building that was once the city hall.

Located in the heart of the city, the Winchester City Museum tells the story of the city from the third century (when Venta Belgarum, as it was then known, was the fifth-largest city in Roman Britain) to Saxon times (when the Old English name for the city was Wintanceaster) through medieval times and to the Victorian era. You’ll learn more about King Alfred the Great, and you’ll also find a handful of Jane Austen-related items. Austen traveled to Winchester in May of 1817 to seek medical help. She died three months later at 8 College Street. Today, you’ll find a plaque on the house. Note that the home is a private building and not open to the public. Austen was buried in Winchester Cathedral.

Winchester may be best known for its 11th-century cathedral. Winchester Cathedral is Europe’s longest medieval cathedral. Built in the Norman Romanesque style, the cathedral was enlarged and added to over the centuries. Traces of different periods and architectural styles remain. The cathedral website describes it as “a living handbook of the main phases of church architecture from the 11th century until the early 16th century.”

On tours offered daily from Monday through Saturday, cathedral guides offer an introduction to the structure’s history and showcase its art and architecture. Features include beautiful chapels where daily Masses were said for the bishops who built them, an ornate 15th-century stone screen behind the high altar, 14th-century oak choir stalls, 12th-century wall paintings, colorful medieval floor tiles, an 11th-century crypt and transepts, and the 12th-century Winchester Bible.

See The Ruins Of Wolvesey Castle

Near Winchester Cathedral, you’ll find the ruins of Wolvesey Castle, also known as the Old Bishop’s Palace. Wolvesey Castle was one of the greatest medieval buildings in England and the palace of the powerful and wealthy bishops of Winchester. The ruins convey a sense of the one-time magnificence of this place. Note that the grounds are uneven and can get muddy.

Marvel At The Great Hall And Sally Port

The Great Hall, one of the finest surviving medieval aisled halls of the 13th century, was once part of Winchester Castle. The hall, with its Purbeck marble columns, Gothic archways, wood beams, and stained glass, is a place of myth and legend. A large round tabletop bearing the names of the knights of King Arthur’s court hangs on the wall at one end of the hall. The table has a Tudor rose at its center and a painting of a king on his throne above that. For years, it was believed that this was the Round Table of Arthurian legend. It is now known that the table dates to the 13th century and not to the sixth century, when King Arthur is believed to have lived. King Edward I may have commissioned the table as part of an Arthurian dinner and tournament he organized. It is thought that the king in the portrait is King Henry VIII, who had the table painted during his reign. The table is impressive, even if it isn’t the original Round Table.

Other things to look for include the heroes and villains of the Great Hall’s past on the walls of the Long Gallery and Queen Eleanor’s Garden, a medieval garden with 13th-century plants.

The other surviving part of Winchester Castle is underground. Visitors can enter the restored secret passages of Sally Port. The passageways were used to surprise enemies or return to the safety of the castle in times of battle. Note that the steps are uneven, and good footwear is recommended.

Take A Tour Of Winchester College

Winchester College is believed to be the oldest continuously run school in the country. It was founded in 1382 by William of Wykeham, the bishop of Winchester. A sign on the grounds says that the bishop founded the school “to educate severely poor and needy scholars for the clergy.” This struck me as somewhat ironic given that these beautiful buildings are now home to one of the most expensive boys’ schools in England.

The buildings comprising today’s school were erected over six centuries. Many original buildings remain central to the school. The college maintains more than 90 listed buildings. Guided tours concentrate on the medieval heart of the college.

Stroll Along The River Past The City Mill

The River Itchen runs through Winchester. Starting at Winchester Cathedral, you can take a pleasant circular walk along this chalk stream. The riverside walk takes you past the Weirs and the Winchester City Mill, the oldest working water mill in the country. The urban corn mill has a history of more than 1,000 years. It was rebuilt in 1744 and restored to full working order in 2004.

Take Time For A Pub Stop

Winchester is known locally as Hampshire’s foodie capital. You’ll find an abundance of restaurants, cafes, bars, and food markets in Winchester that offer plenty of opportunities for refreshment stops during your exploration of the city.

You’ll find no shortage of welcoming pubs, be they traditional, quaint, or modern. Two of my personal favorites are The Wykeham Arms and The Black Boy. Located just down the street from Winchester College, The Wykeham Arms offers full meals. Many of the tables in the pub are old-school desks. Tucked away on Wharf Hill, The Black Boy is a quirky pub whose many connecting rooms are filled with an eclectic mix of art and collectibles. Food is served six days a week, and there is a good-size cloistered garden.

Keep An Eye Out For Public Art

The King Alfred statue is not the only piece of public art to be found in central Winchester. A few pieces to look for as you wander the streets are The Kite Flyer, a bronze figure standing on a bridge spanning Parchment Street; the bronze Hampshire Hog outside the county council offices; and the life-size bronze horse and rider statue near the top of High Street. Painted in a classical style, the bollards on The Square add a colorful, whimsical feel to this street in the heart of the old city.

Winchester is a compact city where attractions are within easy walking distance of one another. Although there are several parking lots within the city center, you may want to consider one of the park-and-ride lots to save money, ensure a space, and avoid the stress of navigating inner-city streets. Buses run between these lots and the city center, but these buses do not run on Sundays or in the evenings.

If you choose to come to Winchester by train, it is approximately an hour’s ride from London’s Waterloo Station. The train station is centrally located in Winchester. It is just a 10-to-15-minute walk from the station to the heart of the city. Buses and taxis are also available. 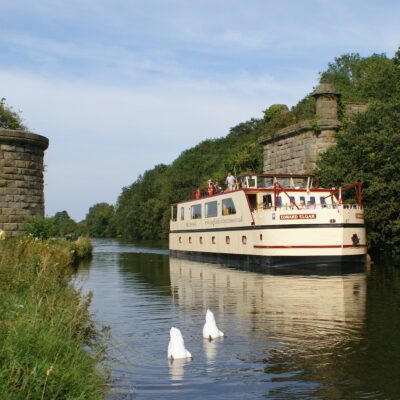 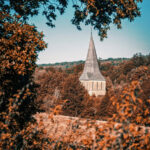 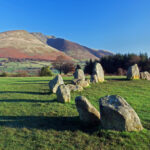