7 Best Things To Do In The Chania Region Of Crete

At over 3,200 square miles, Crete, 99 miles south of the Greek mainland, is the largest of the Greek islands and, indeed, the fifth largest in the Mediterranean Sea — larger than the island country of Malta. Crete could, therefore, be considered a country in its own right.

Yet a delve into its history and traditions and you’ll find that Crete is unmistakably Greek, and proudly so.

As Crete is an island, there’s no avoiding the fact there are beautiful beaches and coves to be explored. Elafonisi is one of the island’s most popular ones. Technically in the area of Chania, it is actually a 47-mile drive from the harbor town of Chania itself to the beach, located on a peninsula in the southwesternmost part of the island. Yes, it’s touristy but well worth a visit to experience the sand dunes and see daffodils and junipers sprouting amongst them. The sand gives off a pinkish hue due to the many crushed shells, and the azure waters rival those of the Caribbean.

There are organized parts to the beach where you can rent sunbeds and parasols, but to truly get away from it all, walk down toward the end of the peninsular where the crowds thin and the water is a mere three feet deep.

A word of warning: Once off the main highway E65, the road does become quite precarious as you traverse the narrow mountain roads.

One of the most photographed (and visited) beaches in Crete, Balos is half an hour west of Chania town and accessible either by boat — private charter or tour boat from Kissamos Bay — or is an hour’s drive directly there via the National Highway and then a gravel dirt trail. Tourist boats operated by companies including Cretan Daily Cruises offer round trips daily during high season from Kissamos Bay and offer the bonus of Cretan cuisine served on board.

Balos has white sands and turquoise waters and is great for snorkeling, and the wider area itself, away from the crowds, is a protected place for monk seals and loggerhead turtles to breed.

Pro Tip: In July and August, the crowds really descend on the beach, and most people use the tourist boats to come. It’s much better to visit in September or even October when the sea will still be warm enough to swim but less crowded, and drive yourself for a more private experience.

You don’t need to be a fan of horse riding to appreciate the nature of the White Mountains surrounding the center of the island. A 35-minute, 16-mile drive from Chania Harbor, sometimes through twisty roads, and you’re at an elevation of nearly 2,000 feet at the highest point of the Deres estate.

Deres offers horse riding for beginners to advanced riders. I went for the three-hour trek around the estate, riding among the olive groves, which offer sweeping views down to the sea. What I liked about Deres is their philosophy of natural horse training — recognizing each horse has a unique personality — as well as the fact the horses can roam free through the estate and the hills, always seemingly knowing the right time for food and all returning in time.
Other activities include hiking through Deres’s trails — just be aware it’s quite mountainous — and cookery classes using organic produce grown on their estate.

After a morning of horse riding, sit down on the veranda to a hearty lunch made by the staff. Deres makes for a great nature experience.

For those of you looking to taste award-winning wines, a half-hour drive from Chania into the Lefka Ori Mountains of Western Crete to visit Manousakis Winery is a must.

Producing wines since 2007, when they were a small enterprise, Manousakis has grown into a majestic enterprise, producing 150,000 bottles of wine a year.

A family establishment handed down through the ages, Manousakis offers wine tours and tastings as well as a restaurant to complement your wine with traditional Cretan cuisine. The winery is also expanding into cultural events such as exhibitions and Cretan music nights.

Another tipple famously produced in the Cretan countryside and supplied to hotels, restaurants, and bars across the island and mainland is Cretan Brewery — which has made beers from water sourced in the White Mountains, malted barley from Northern Greece, and hops and yeast since 2007.

There are five types of beers to choose from, all containing natural sugars from honey or grapes from dry white wine extracted using a process that involves burning olive peat in order to heat the water.

You can tell that there are literally no additives in Cretan Brewery beers, and I can attest that it definitely makes a difference to the taste — or maybe it’s just a placebo effect, feeling “healthy” whilst sipping on an alcoholic beverage.

The brewery is a 30-minute drive from Chania in an agricultural area, and it’s possible to have a tour (booked in advance) of the brewing process accompanied by a tasting afterward at their terrace restaurant, which has views over the river valley with olive, orange, and avocado trees.

This is one of my favorite activities to enjoy in the Chania region of Crete as it combines drinking a high-class beer with peaceful surroundings and traditional Cretan dishes.

Exploring the old area of the Chania port is a must. To be honest, it’s pretty difficult to find amongst the narrow streets, so it’s best to come outside of the July and August high seasons. If not staying in one of the many boutique establishments in the Old Town, such as the Domus Renier Boutique Hotel or the Skala de Faro (which offers views of the lighthouse), there is a regular bus service from outlying areas.

The Old Town itself is full of museums and churches such as the Maritime Museum of Crete along the quayside with nautical relics from the past and paintings plus old photographs commemorating traditional moments in Greece’s naval history.

It’s no exaggeration to say that the highlight of Old Chania is the Old Venetian Harbor. Over the years it’s endured Venetian, Ottoman, and, briefly, even Egyptian rule, making for fantastic building facades. The waterfront by the lighthouse is the busiest area with many restaurants and tavernas where you can sit and watch the sunset.

Nowadays it’s only really small boats or yachts that use the harbor — a newer one has been created at Souda Bay slightly further down the coast to accommodate large ferries.

Behind the quay you’ll find the Jewish Quarter where two synagogues used to stand. One was completely destroyed during the occupation of Crete in WWII. The second undestroyed synagogue, Etz Hayyim, has been restored and is open to visitors at various times during the week.

The alleyways of the Old Town and Jewish Quarter, culminating in the quayside and lighthouse, are some of the busiest during the summer, so unless you’re okay with crowds, avoid booking your trip for July or August and visit in the spring or fall, when the weather is pleasant to wander around, instead.

Built between 1371 and 1374 by the Venetians, Frangokastello Fortress is considered an important historical monument. It was set up as the main military base for the Venetian army and designed to protect southern Crete from any pirate attack.

The four towers at each of the square corners stand out, as does the Venetian coat of arms over the massive entry gate. Today, the buildings and fortifications you can see inside the actual castle were constructed by the Ottomans in the 17th, 18th, and 19th centuries, proving once again the eclectic nature of the history of Chania and its surrounds.

One interesting story is how, on May 17, 1828, hundreds of Cretans aimed to occupy the castle but were driven back and massacred by the Ottomans. It’s said that each year at dawn, on the anniversary of this event, shadows of the massacred can be seen marching toward the castle. They’re called Drosoulites locally. This means Dew Men. Science will maintain that it is the reflection of mist off the early morning dew, but some locals swear by the ghostly figures.

Be aware Frangokastello Fortress is not actually in Chania Town itself but a 50-mile drive south — still in the area of Chania. It’s well worth a visit, especially considering admission is less than 2 euros per person, to see its surroundings and imagine the battles that have taken place.

For more Greek island inspiration, read up on why the Diapontia Islands are Greece’s best-kept secret, plus Paxos, Greece: the charming island you must visit. 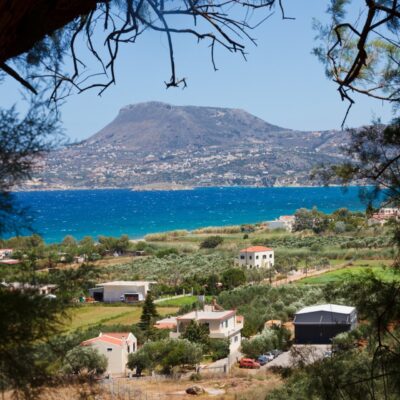 Crete12 Fantastic Experiences On The Island Of Crete, Greece 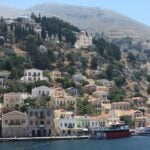 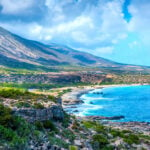