The trail, located in southern Utah’s Zion National Park, really does have it all. Its aura of danger satisfies thrillseekers, while its stunning beauty delights photographers and sightseers alike. All of its attributes have combined to make Angels Landing a world-renowned bucket-list adventure.

On paper, Angels Landing’s 5.4 miles (round trip) and 1,500 feet of elevation gain might sound comparable to many moderately difficult hikes out there. At least that’s what I thought before I got to the trail. But I soon realized that the trail has some unique qualities that have nothing to do with mileage and grade — namely its sheer drops and abrupt rises. Its challenges combine for a strenuous hike, and most people take 3 to 5 hours to complete it.

Utah’s state tourism website calls Angels Landing “a spectacular day trip for well-conditioned hikers who have no fear of heights.” Even with those qualities, though, there are a few things that can help make the hike safer and more enjoyable. Here are 12 things to know before you go.

1. It Might Be The Scariest Hike You Ever Try

I’ve done some moderately scary hikes over the years, including up and down both the North and South Rims of the Grand Canyon, the slippery Mist Trail at Yosemite, and Arizona’s highest peak, Mount Humphreys. Angels Landing may not be the most strenuous hike I’ve ever done, but there’s no doubt it is the scariest.

Another factor to consider is the popularity of the trail. Zion National Park attracts about 4.3 million visitors a year, and many of those visitors have Angels Landing on their must-do list. That translates to throngs of hikers. I recommend timing your hike to avoid the crowds as much as possible.

2. An Early Start Is Crucial

With that in mind, perhaps the most important tip is to start as early in the day as possible. That means getting on the 7 a.m. park shuttle bus and heading straight to The Grotto stop, where you can access the Angels Landing Trail.

3. Spring And Fall Are Optimal

Weather-wise, the best times of the year to visit are spring and fall, which typically feature warm, sunny days and cool nights. Along with their cooler temperatures, April, May, September, and October have slightly lower visitation numbers — ranging from about 370,000 in April to about 497,000 in September.

Park visitation numbers show that July is the busiest month, with more than 600,000 visitors in 2019. It is also the hottest month, with average high temperatures reaching the high 80s. June and August attract nearly as many visitors, and they also register average highs in the 80s.

4. The First Section Is Grueling

Although Angels Landing’s final half-mile ascent gets much of the attention, remember that you have to climb about 1,000 feet in elevation over 2 miles to get to that point.

5. There’s No Shame In Turning Back

6. The Second Section Is Exhilarating But Frightening

7. The Chains Are Your Friends

This section is where the trail’s infamous chains will be crucial. Do not hesitate to keep your hand firmly on those chains as you move forward. And be forewarned that along with the scary drop-offs, you will also encounter plenty of very steep sections, where the chains will help you propel yourself upward.

For photos, a GoPro or other action camera can come in handy here. I saw one woman hike the entire trail with a GoPro strapped to her shoulder.

9. Opt For A Streamlined Pack

I recommend a streamlined Camelback or narrow backpack for this hike.

As is often the case with difficult hikes, age did not appear to be the main determining factor for people hiking Angels Landing. Much more important was level of fitness. I encountered hikers of all ages struggling on the trail, while plenty of fit hikers, old and young, appeared to be holding their own. (Note that Angels Landing is not recommended for children younger than 12 or so.)

11. Remember To Soak Up The Views At The Top

12. The Downward Hike Can Be Challenging, Too

For more on Zion National Park, see this page. 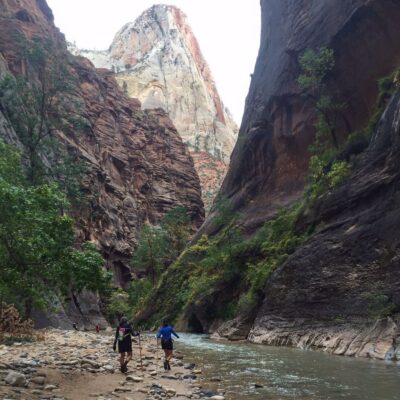 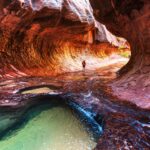 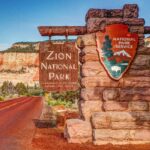 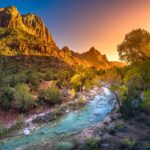 ZionGetting The Most Out Of A Visit To Zion National Park