Why Bursa, Turkey Is A Must-Visit

Bursa, Turkey’s fourth-largest city, is located in Anatolia at the foot of Mount Uludag, which is shrouded in mystery and legends. Bursa was the first capital of the Ottoman Empire from 1326 to 1363.

It is a modern, thriving city with a great many historical sites dating from the Ottomans and before, which you can enjoy without having to cope with the masses of tourists that often make a visitor’s life in Istanbul difficult.

Conveniently located toward the western end of the Silk Road, Bursa is famous for its silk market and gorgeous silk products. Add to this the Green Mosque, the origin of Turkey’s shadow theater, the original Iskender Kebab, and plenty of parks and green spaces which also gave Bursa the name Green Bursa, and you’ll see why this is one of my favorite places in Turkey to visit, and why you should go, too.

How To Get To Bursa

It’s easy to get to Bursa. If you are in Istanbul, the most picturesque way is to take a ferry from Yenikapi Terminal to Yalova (a two-hour journey) and from there, a bus to Bursa (which takes approximately one hour). Or you can take a direct bus from the Bus Terminal in Istanbul to the terminal in Bursa (which is a 3.5-hour journey). Coach travel in Turkey is very comfortable. There are many companies, all operating modern coaches with two drivers and an attendant serving hot and cold drinks and little snacks at no extra cost. The best-known operator is Metro.

Once in Bursa, you can go on a guided tour, but it’s more fun and easier to get around on foot and on your own. Several international companies have their Turkey headquarters in Bursa, which means that basic English is widely spoken. Learn merhaba, which means “hello,” and kolai gelsin, a universal greeting that translates, literally, to “may things be easy for you.” Use these two phrases, and doors will open as you enjoy these wonderful experiences that make Bursa a must-visit city.

1. Treat Yourself At The Silk Bazaar

Koza Han, as the silk bazaar is called in Turkish, was built in 1491 at the orders of Sultan Bayezid II as a caravanserai — a trading place and inn for the passing silk caravans and their animals. Silkworms, which originate in central Asia, were brought to Bursa centuries ago and have allowed for a thriving industry upon which the wealth of the city was founded.

There are two entrances to the square building, which features a large and a small courtyard and two galleries where the shops are located. Admire the beautiful Ottoman architecture of arches and pillars, red and white stone, and marble carvings as well as blue Iznik tiles. These tiles are a main feature in Istanbul’s Blue Mosque, too.

A fountain and a flower market are to be found at the entrance, then proceed to the courtyard, where several cafes offer tea, coffee, and Turkish sweets and cakes. One of the most interesting features in the bazaar are the many photographs which document how the silk workers lived and worked when silk was still produced on the premises as well as autographed pictures of celebrities and politicians who visited, most prominently Queen Elizabeth II!

Take your time and stroll from shop to shop, where you will find the finest and most beautiful silk scarves, ties, gowns, and much more. Some are quite expensive; others are more affordable. Turkey is also famous for its skilled silversmiths, and other shops sell tea or coffee sets of solid silver.

You’ll have a great time journeying through history as well as a chance to buy a valuable souvenir. Plus, unlike Istanbul, shopkeepers in Bursa don’t hassle you to buy their wares, so it’s a very enjoyable experience.

2. Have Fun At The Karagoz Museum

When visiting shops and bazaars in just about any town in Turkey, you will see silhouettes of two distinctive male figures, sometimes in color, sometimes in black and white, and you may have wondered who or what they are. Their names are Karagoz and Hacivat, and they are the main characters in the famous Turkish shadow play.

This form of entertainment has been popular since the 1500s and lasts to this day, not only for children but also for adults as the dialogues are often satirical. The two characters are historical figures originally from Bursa. They were construction workers when a major mosque was built, but they were also pranksters who got their fellow workers distracted with their antics to such an extent that the sultan got so angry he had them executed. They were so missed, though, that the tradition continued.

All of this and everything to do with Turkish shadow theater can be admired at the unique Karagoz Museum.

A master puppeteer is at hand to explain (in English) not only the art form’s background and how the puppets are played but also how they are crafted by hand from paper-thin camel hide. With luck, you may even see a performance and will have fun even if you don’t understand a word.

3. Be Awed By The Green Mosque And Tomb

What the Blue Mosque is to Istanbul the Green Mosque and Tomb are to Bursa. The mosque was built between 1415 and 1419 on behalf of Sultan Mehmet. As you approach the mosque, you will be looking up at the stalactite-like gateway, which is covered in green tiles and gold.

The interior is also a prime example of Ottoman architecture and craftsmanship, again dominated by the splendor of shimmering green tiles illuminated by enormous chandeliers. The sultan’s tomb and those of his sons and daughter are in a similar building on a hill just opposite the mosque.

Remember: When visiting a mosque in Turkey, you have to take your shoes off and cover your head and shoulders. Men need to wear long pants if a sarong is not provided at the entrance, and women will need to wear headscarves.

4. Take The Best Walk In Bursa

It’s easy to explore Bursa on foot. The main road runs along the River Gokdere, which is a tributary to the Nilufer River that leads to the Irgandi Bridge. It’s a single arch stone bridge, but it’s one of only three bridges in the world with shops on it. The ones here are a must-see because it’s where artists make and sell traditional puppet play figures.

Go uphill until you come to Hisar Gate, the only remaining gate of the ancient city wall, and prepare for a rather steep and uneven walk that leads you to the old part of Bursa, which is lined with the traditional wooden houses. In the basements, you’ll find the most extraordinary craft shops with carpet weavers and silversmiths. This route ultimately ends at the Green Mosque.

You won’t know what a real kebab is until you have visited the place where it was invented. Thinly sliced lamb is grilled on a rotating spit. It’s served with a spicy tomato sauce and dollops of yogurt and drizzled with melted butter; all this is folded into pita bread.

It all started in 1867 with Bursa butcher Iskender Bay, who also ran a small restaurant located in a blue house. One day, he had the idea to rotate his spit vertically instead of horizontally, which cooked the meat through while better preserving the juices, which otherwise would drip into the charcoal fire.

Today, Iskender Kebab Restaurant is a landmark in Bursa, still run by members of the same family. Be prepared for a long wait, but know the meal will be worth it. While you wait, you can look at the many photographs documenting the history of the world-famous dish you’re about to enjoy.

If you like juicy steaks and kofte (Turkish meatballs), Uzan et Mangal is a great place to eat. Another establishment I recommend is Selcuk Restaurant.

Bursa is a great place to shop. Apart from the silk bazaar, you might be looking for carpets, tiles, ceramics, or other textiles. In the small streets around the Green Tomb and Mosque, there are plenty of shops selling all of these goods. My favorite rug dealer, Yunus, is also a good friend of mine.

Being a rather international city, Bursa has a modern shopping mall, too. Enjoy browsing in the very pretty Kent Meydani Shopping Center, which has boutiques and jewelers.

Best Places To Stay In Bursa

I recommend you treat yourself and make use of the hot springs and thermal waters for which Bursa is also famous by splashing, and staying, at the BB Celik Palace Hotel as I did during my visit.

If you are looking for something cozy, check out the 7 Rooms Boutique Hotel.

You can easily spend two days in Bursa and may want to include a trip to Mount Uludag by cable car.

Bursa is a destination worth visiting in summer or winter. You’ll get the most out of your trip by exploring on your own, just make sure you have comfortable shoes as the streets in the older parts of town are cobblestoned. 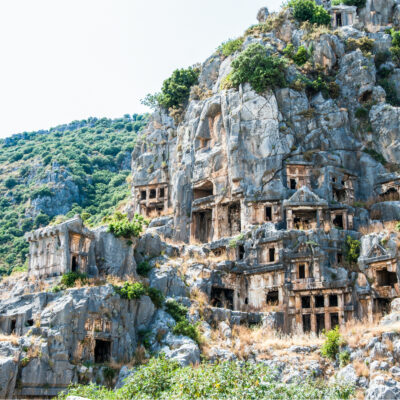