Scandinavia is home to some of the most stunning vistas on Earth: Think storybook fjords, the sometimes elusive northern lights, historic cities, stunning seascapes, and more. So it should be no surprise that the crown jewel of Northern Europe, the elongated country of Sweden, offers a number of astonishingly beautiful spots.

Here are some of the highlights.

Sweden’s gorgeous capital city of Stockholm is an enchanting archipelago set on the Baltic Sea. One of its main areas — and perhaps its prettiest — is its Old Town, known as Gamla Stan. This UNESCO-designated region, one of the oldest and best-preserved city centers in Europe, is where Stockholm was founded back in the 1200s. Today, Gamla Stan is home to showstopping sights like the Royal Palace, winding cobblestone passageways, and Stortorget Square.

Travelers looking for a photo op should check out the colorful houses set right on the square. The quartet of buildings in red, orange, yellow, and green are said to be the most photographed spot in all of Stockholm.

Another UNESCO World Heritage site, this area on the Gulf of Bothnia is known for its interesting glacier development. It’s a beautiful spot, full of craggy rock islands and steep cliffs melting into the northernmost arm of the Baltic Sea.

The High Coast is also renowned for its hiking and is home to the well-known High Coast Trail, a roughly 25-mile-long winding coastal journey. Striking river-valley views can be found at the High Coast Bridge in Adalen.

The alpine heart of Scandinavia, central Sweden’s famous ski escape is yet another beautiful spot in this Nordic country. Are is a popular destination during the winter months, but it has more to offer than just the slopes. Fishing, hiking, water sports, and health spas are just a few other activities this region offers in all seasons. Visit for unreal mountain views in one of Sweden’s prime vacation stations.

The Swedish island of Gotland is the largest island of the more than 200,000 found in the nation. Located east of the mainland in the Baltic Sea, the Gotland area has numerous limestone formations known as sea stacks. When they are found in groups, the rocks are called raukfalt or raukar. Some of the best-known ones even have names, like the Hoburgsgubben (Hoburg Gentleman).

The sea stacks are a unique and pretty sight sure to impress any visitor to the area. After all, Gotland has been called a limestone Hawaii!

Another beautiful spot on the island of Gotland is the municipality of Visby. This small city is known as the City of Roses and the City of Ruins.

The ruins are perhaps the area’s most noteworthy features, and Visby is considered the best-preserved medieval city in all of Scandinavia. Its long wall and numerous ruined churches have made it a UNESCO World Heritage site, yet another on our list of beautiful places in Sweden. The pretty red roofs and coastal setting make this an exceptionally gorgeous location.

There are more than 100,000 lakes in the country of Sweden, so at least one had to make this roundup of scenic spots. The centrally located Lake Vanern just happens to be the largest not only in the nation but also in the entire European Union. With its huge surface area, it feels more like an ocean, and there are numerous pretty spots along its shores to visit.

Some noteworthy ones are Lacko Castle on Kallandso and both access points of the Gota Canal to the lake. The canal is the longest in Sweden and connects the Baltic Sea to the west coast via the country’s interior lakes and rivers. Swimming, fishing, water sports, and more can be enjoyed at Lake Vanern — it’s a popular recreation destination.

The far northern reaches of Sweden are not as frequented by tourists but are some of the most beautiful in the country. The King’s Trail, which runs through four national parks, showcases the scenery of the north.

It also offers an opportunity to see another of Sweden’s UNESCO-designated sites, since it is concentrated in the Laponia area in northernmost Sweden. According to UNESCO, this region is “a magnificent wilderness of high mountains, primeval forests, vast marshes, beautiful lakes and well-preserved river systems” that “contains areas of exceptional beauty such as the snow-covered mountains of Sarek, the large alpine lakes of Padjelanta/Badjelannda, and the extensive river delta in the Rapa Valley.”

The King’s Trail, or Kungsleden in Swedish, is one of the few places in the world where you can hike above the Arctic Circle. The entire route takes roughly a month to journey, but there are smaller sections of the trail to tackle for those who don’t have that much time to devote to the excursion.

Smogen is both an island and a cute summer town on Sweden’s west coast. It is known as a well-preserved example of an old fishing village. In fact, tourists can pick up souvenirs from little fishing huts on the village’s long pier.

Besides being a pretty seaside enclave, Smogen is home to a popular photography spot called Smogenbryggan (the deck of Smogen). This is a colorful group of fishermen’s huts that rest on the water on part of the town’s picturesque boardwalk.

One of the biggest tourist draws in Sweden is this ice hotel, the first of its kind on Earth. It serves as part accommodation and part art installation, since each year it’s designed and built in a different way. The best time to experience it is during its full-fledged winter glory, when the northern lights sparkle and shine. However, there is a permanent structure on-site, so the hotel can be accessed during all seasons.

It’s clear that Sweden is an astonishingly beautiful nation, with gorgeous trails, picturesque islands, historic cities, and more. Want to spend more time in Northern Europe? Start with our suggestions for Helsinki, Stockholm, and Tallinn. 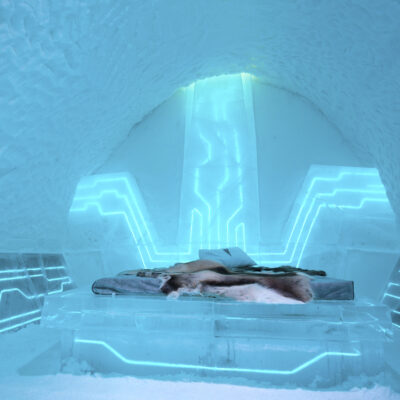 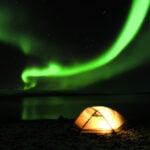 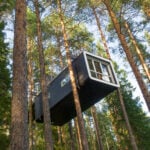 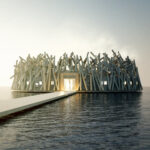