9 Fantastic Things To Do In Oxford, Mississippi

Named for the university town in England, Oxford, Mississippi, has also made a name for itself in terms of higher education and culture. While it’s home to the state’s flagship university, there’s much more to this town than the University of Mississippi.

Located just 100 miles from Memphis, Oxford boasts a rich literary tradition, important Civil War history, and ties to the civil rights movement. Each year, thousands of tourists delight in its beauty and cosmopolitan feel, characteristics usually associated with cities many times its size.

Here are nine of our favorite things to do in Oxford.

Oxford wouldn’t be Oxford without the University of Mississippi, and a stop here is worth your vacation time. There’s a reason why national outlets including Architectural Digest routinely name the campus one of the most beautiful in the country.

Ole Miss, founded back in 1848, radiates out from the Lyceum. This Greek Revival masterpiece has seen turbulent times: It served as a hospital during the Civil War, and the bullet holes that dot its columns are reminders of the horrific violence that erupted when James Meredith enrolled as the university’s first African-American student in 1962.

Beyond the Lyceum, the campus sprawls over thousands of acres covered in magnolias, live oaks, and massive pines. It’s worth spending part of a day here to bask in the beauty of the park-like setting.

2. Check Out The University Museum

From fine art to scientific instruments to ancient artifacts, the collections at the University of Mississippi Museum are a delight to explore. Consider stopping here for a fascinating look at the university’s past and its commitment to arts and culture.

At the museum, you’ll see some 19th-century tools used to teach Ole Miss students physics and astronomy, as well as Roman and Greek pottery and coins. There’s an impressive collection of American art, too; it was bequeathed to the university by individual donors and artists.

The museum is open Tuesday through Saturday from 10 a.m. to 6 p.m.; admission is free.

While it’s technically a part of the University of Mississippi Museum, Rowan Oak sits to the south of the Ole Miss campus. The stately home was where Nobel laureate William Faulkner lived for four decades until his death in 1962. In 1972, the writer’s family sold the complex to the University of Mississippi on the condition that it would serve as a museum and a place for people to learn about Faulkner’s work.

While the grounds are open to the public and free to roam, it costs $5 to step inside the 150-year-old home and see the rooms where the literary giant lived and worked; even his iconic portable Underwood is on display.

Fans can also pay homage to Faulkner at the Oxford Memorial Cemetery, where the writer and his entire family are buried. Visitors often leave trinkets, including coins and bottles of bourbon, on his grave. It’s customary to take a shot and then leave the rest as a tribute to the legendary wordsmith.

4. Take In The Town Square

The beating heart of Oxford is its historic town square. This charming, quintessential small-town setting includes restaurants, galleries, boutiques, and specialty shops (we’ll get to those later), all clustered around the Lafayette County Courthouse, which was rebuilt after the original structure was burned by Union troops during the Civil War.

This spot has been Oxford’s economic and social hub since the town’s founding back in the 1830s. It’s the perfect place to take a seat and do some serious people-watching!

Oxford is renowned for both the quantity and quality of its art galleries. Many feature everything from fine art to folk art and everything in between, so you’re guaranteed to find something that captures your interest.

The Oxford Treehouse Gallery, just outside town and tucked into a pine grove, is a gorgeous spot featuring pieces from more than 20 regional artists.

Southside Gallery is conveniently located in the town square. It showcases works by artists from the Southeast and hosts monthly exhibits plus artist receptions.

Gallery 130, located on the campus of Ole Miss, is a gem featuring works by student artists. It also hosts shows for visiting professional artists and is open to the public from Monday through Friday.

To get a great overall feel for Oxford’s art scene, consider taking part in the Oxford Art Crawl, which takes place on the fourth Tuesday of most months from 6 p.m. to 8 p.m. A courtesy bus drops participants off at each gallery, allowing them to check out the exhibits and pop-up shows at each stop.

6. Stop By The Burns-Belfry Museum

To learn more about the lives and history of Oxford’s African-American residents, a stop at the Burns-Belfry Museum & Multicultural Center should be on your agenda.

The museum is housed in the Burns Methodist Episcopal Church, built by freed African Americans in 1910. When the congregation moved to another building in the 1970s, the church became an office building called the Belfry. Eventually, author and Oxford native John Grisham bought the building and donated it to two non-profits, tasking them with its preservation.

The Burns-Belfry now has a dual purpose: It serves as a venue for community meetings and events, and it also houses a museum that details the history of the church and the people who attended services there.

Admission is free, but donations are accepted.

There are several places in and around Oxford where you can take advantage of terrific recreational opportunities.

Less than an hour to the northwest, Holly Springs National Forest is a popular outdoor stop nestled amidst northern Mississippi’s iconic pine woods. There are hiking trails past several lakes and cypress swamps, and camping sites are available for the truly adventurous.

Sardis Lake, a 45-minute drive from the center of Oxford, is the spot where locals go for time on the water. First built in the 1930s as a flood-control facility, the lake is now a top recreation spot, offering beaches, boating, and great fishing.

In town, Avent Park features sports fields, a walking trail, and plenty of quiet nooks that are perfect for picnicking.

And if you’re looking to make the trip from Ole Miss to Rowan Oak, skip the car ride and head out on Bailey’s Woods Trail, a wooded path that connects the two sites. It will take you just 20 minutes and is a great way to get some exercise while you sightsee.

Oxford has more than its fair share of terrific boutiques and specialty shops, so you’re bound to find the perfect presents and souvenirs.

At Square Books in the town square, you’ll find everything from rare first editions to paperback bestsellers. Square routinely hosts book signings and other literary events.

Neilson’s, situated near the courthouse, is a department store that dates to 1839, making it one of the South’s oldest retail outlets. Offering clothes, cosmetics, and home accessories, Neilson’s is listed on the National Register of Historic Places.

For upscale gifts, stop by Katherine Beck. This sweet boutique does big business catering to the sorority scene at Ole Miss; it offers jewelry and home decor items.

For carefully curated on-trend fashion pieces, Cicada has got you covered. This luxe women’s boutique features labels including Rebecca Taylor, Helmut Lang, Vince, and Alexis Bittar, among others.

9. Chow Down At Ajax Diner

Serving up Southern soul food so good it gets its own shout-out here is Ajax Diner. Located in the town square and full of colorful, kitschy decor, Ajax has long been a local favorite, routinely making best-of lists for everything from its cornbread to its plate lunches.

Offering regional favorites including catfish, fried chicken, turnip greens, po’boys, and red beans and rice, this diner is the place to go at the end of a busy day when you’ve really worked up an appetite.

Don’t sleep on the squash casserole (it’s amazing!), and be sure to save plenty of room for dessert. The pecan pie is to die for! 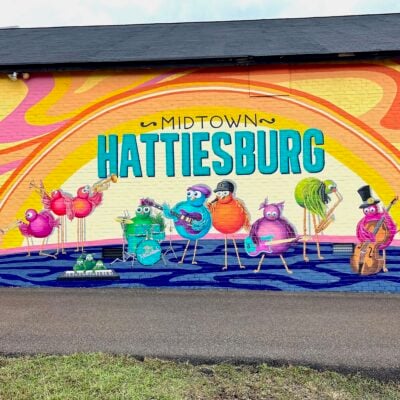