8 Great Things To Do In Copenhagen Near The Airport

With its iconic harbor, vintage amusement park, and sparkling canal system, Copenhagen is a not-to-be-missed European destination all on its own.

But with airlines such as Norwegian Air using the Copenhagen Airport as a stopping-off hub for countless flights between the U.S. and other European cities, the Danish capital has also become a popular spot for 6- to 8-hour layovers.

The good news about Copenhagen is that visitors can see a lot of the city in that amount of time, and many of the city’s major attractions are just a 15- to 20-minute trip from the airport.

Also adding to Copenhagen’s appeal as a layover destination is the convenience of the city’s metro system. An efficient metro station is located at the airport, and attendants are often on hand to help guide visitors who have questions about buying tickets or choosing the right metro stop.

So, with all that Copenhagen has to offer, there is certainly no reason to slog through a long layover in an airport lobby.

Here are some of the best things to do near the Copenhagen Airport.

When most people think of Copenhagen, the lovely Nyhavn Harbour is likely the image that comes to mind. Rows of multicolored buildings line a harbor filled with sailboats — a vivid scene that is reflected in the water of the canal.

Cafés and restaurants offer lively outdoor seating all along the harbor, and bicycle riders vie with pedestrians along the busy byways.

The neighborhood was the longtime home of author Hans Christian Andersen, and it has a definite fairy-tale vibe. Andersen is said to have written classics such as “The Princess and the Pea” and “Little Claus and Big Claus” while living at various addresses in Nyhavn.

The harbor is especially lovely on a sunny day, so if you are lucky enough to land in Copenhagen in bright, cloudless weather, a stroll through Nyhavn cannot be beat.

At the Copenhagen Airport metro station, buy a ticket to the Kongens Nytorv station, about a 15-minute ride. The Nyhavn Harbour is just a 5-minute walk away. Expect to spend an hour or two walking through the area.

2. Explore The City By Boat

For a quick and delightful overview of the city, hop onto one of the myriad canal tour boats that are available in a number of spots in Nyhavn.

The tours, which offer a variety of times and itineraries, typically take in such popular attractions as the Copenhagen Opera House, the Amalienborg and Christiansborg Palaces, and the Little Mermaid statue.

Usually about an hour long, the tours are available in Danish or English and cost about 95 Danish kroner (about $14). They are free with the official Copenhagen Card (but only with a departure from Gammel Strand, not from Nyhavn).

Tip: Opt for the hop-on, hop-off canal tour, which will allow you to stop and explore the attractions rather than just seeing them from the water.

3. Lunch At A Street Food Market

After a Nyhavn stroll and a city cruise, the perfect place for lunch is just a 10-minute walk away. Head across the Inderhavnsbroen Bridge to The Bridge Street Kitchen for a cool outdoor dining experience that is part ethnic street-food scene, part food-truck festival.

The Bridge Street Kitchen consists of a collection of cuisine options spread out near the bridge. It is billed as a “melting pot of street-food kitchens and bars serving tasty food and drinks from around the world,” and it offers everything from lamb curry to pizza and burgers.

For those seeking a taste of traditional Danish fare, a great option is the Palaegade Street Kitchen stand, with its selection of open-face sandwiches. Among the choices are crispy fried fish garnished with rémoulade and raw herring seasoned with pickled onions and dill. The sandwiches come in a cute box, making them perfect for a picnic at one of The Bridge Street Kitchen’s wooden tables.

4. Bike The Streets And Bridges

To feel like a local in Copenhagen, there’s no better mode of transportation than the bicycle. Throngs of cyclists crowd the bike paths on sunny days, and the Visit Copenhagen website calls biking the “authentic, local way” to travel.

“It is fun, healthy, easy, cheap, and without a doubt, the best way to see Copenhagen,” says the website.

Bike rentals are available all over town, and visitors can go on their own or with a tour. The City Bike is available through Bycyklen.

For a thrilling time in a classic setting, head to Tivoli Gardens, an 1840s-era amusement park located next to Copenhagen Central Station.

At just 15 to 20 minutes from the airport by train, Tivoli makes a convenient stop on a limited layover schedule. As one of the most popular amusement parks in the world, it’s sure to be crowded on a sunny day. Still, the unique rides, including a 1914 wooden roller coaster, make the visit worthwhile.

After checking out the rides, head over to the Tivoli Food Hall, where you’ll find spit-roasted chickens, Danish smorrebrod, and Japanese and Chinese street food.

The park is also a great place for a stroll amidst the lush gardens, exotic architecture, and beautiful scenery.

During the fall, Tivoli is transformed into a charming Halloween universe, and during the holidays, it becomes a cozy Christmas market featuring 60 or so stalls that offer decorations, knitted products, snacks, deli items, sweets, and hot drinks.

If it’s a rainy day, or even if it’s not, Copenhagen’s National Aquarium is a great choice for children and adults.

The five-armed aquarium has water all around and is intended to give visitors the impression of being underwater. Billed as the largest aquarium in Northern Europe, the Copenhagen attraction promises a “round-the-world journey under the sea.”

With its innovative whirlpool-inspired design, the aquarium’s architecture has won international recognition. Inside, visitors will find thousands of fish and sea creatures in 48 aquariums.

Entry to the aquarium costs 170 Danish kroner (about $25), but it’s free with the Copenhagen Card (54 euros or about $59 for 24 hours). Allow a couple of hours to take in the aquarium.

No visit to Copenhagen would be complete without a visit to The Little Mermaid, a 1913 work of art that is displayed on a rock near the Langelinie Pier.

Based on the fairy tale by Hans Christian Andersen, the bronze sculpture was created by Edvard Eriksen and was a gift from Danish brewer Carl Jacobsen to the city of Copenhagen.

The statue, which depicts a mermaid becoming human, has become an iconic symbol of Copenhagen to the world.

Thanks to its location in the sea, the mermaid appears to be swimming to the surface as the tide changes.

“Every morning and evening she swims to the surface from the bottom of the sea and, perched on her rock in the water, she stares longingly towards the shore hoping to catch a glimpse of her beloved prince,” the Visit Copenhagen site explains.

The Little Mermaid is a major tourist attraction in Copenhagen, so be prepared to be surrounded by hundreds of others when you visit. Try to arrive early in the morning to avoid the crowds. While the statue is visible from the Copenhagen canal tours, you’ll have to arrive by land to get a close-up look.

8. Immerse Yourself In History

Copenhagen is home to a wealth of museums, palaces, and castles. If you’re there for only a day, you will likely have to choose just one.

The National Museum of Denmark is the country’s largest museum of cultural history, and it features everything from Viking-era items to golden horns to mummies.

The Christiansborg Palace, with its pretty central spire, is located on the tiny island of Slotsholmen and is home to the Danish Parliament, the Supreme Court, and the Ministry of State. The palace also showcases the Queen’s tapestries, which depict 1,000 years of Danish history.

As the residence of Denmark’s royal family, the stately Amalienborg Palace is a repository of the country’s royal history. Visitors can take in the daily noontime changing of the guard from the beautiful palace square.

For Shakespeare lovers, a visit to the imposing Kronborg Castle might be worth the longer trek. The castle is known worldwide as Hamlet’s Castle and is a UNESCO World Heritage site. It is located about 28 miles north of the Copenhagen Airport in the town of Elsinore, and a visit will involve a 45-minute train ride and a 20-minute walk.

More information about getting to Copenhagen attractions from the airport is available on the VisitCopenhagen website. 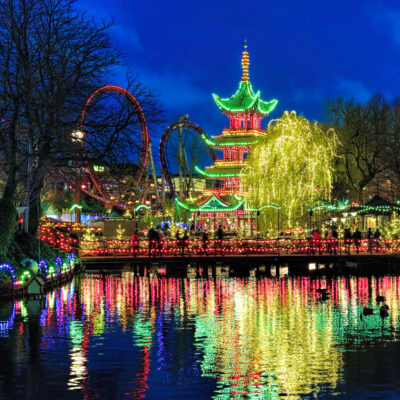 CopenhagenWhy Tivoli Gardens Is A Must-Visit Around Christmas 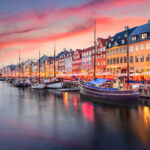 CopenhagenHow To Spend A Fantastic Day In Copenhagen 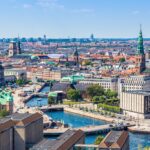 Copenhagen8 Great Things To Do In Copenhagen Near The Airport 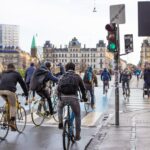 CopenhagenHow To Get Around Copenhagen, Denmark