8 Great Things To Do In Minneapolis

Minneapolis, Minnesota, offers something for every visitor. The city is known for its terrific parks, pro sports, and award-winning museums. It’s got one of the tastiest and sloppiest burgers you’ll ever try. And it’s where Prince Rogers Nelson was born and raised and became the musical superstar we all know as Prince.

Here are a few of our favorite things to do in this terrific town.

There is no shortage of outdoor activities in Minneapolis; the city consistently ranks among the top park systems in the country. It’s a gorgeous place to enjoy nature, whether you prefer jogging, hiking, biking, kayaking, skiing, or canoeing.

Start with a walk along Saint Anthony Falls, a Mississippi River waterfall that once powered lumber and flour mills. Be sure to check out nearby Stone Arch Bridge and its 2-mile hiking and biking trail. Then head to Loring Park, where an expansive green space intersects with the Grand Rounds Scenic Byway, which runs a total of 50 miles through Minneapolis and the surrounding areas. Picnic by Johnson Lake, try your hand at tennis on the courts, or splash down in the wading pool.

Nearly 5.5 million people visit Lake of the Isles Park each year. In the winter, visitors ice skate on the lake, and in the summer, the area serves as a prime fishing spot. Stately older homes are located on the park’s perimeter.

The most popular of the city’s parks, however, is Chain of Lakes Regional Park, where you can stroll through gardens featuring decorative fountains, take a sun and sand break on the beach, or enjoy a bike ride around the park’s three lakes. Minnehaha Regional Park, known for its spectacular gardens and 53-foot waterfall, is also a must.

Once you’ve gotten your fresh air, check out Minneapolis’s arts and culture scene at some of the city’s top museums. Start at the Weisman Art Museum, located on the campus of the University of Minnesota. This museum prides itself on offering exhibits that can be observed in the appropriate social and historical contexts, and its permanent collection is housed in a shining Frank Gehry-designed building. Admission is free, and the museum is open every day but Monday.

The Walker Art Center — and its fantastic sculpture garden — houses a cross-disciplinary contemporary art collection, including music and theater performances. Be sure to snap a selfie at the garden’s iconic Spoonbridge and Cherry. The Center is open every day but Monday; admission costs $15.

The Minneapolis Institute of Art, located just south of downtown, is home to 90,000 works of art spanning six continents and 5,000 years. Daily hour-long guided tours are free, as is admission. The museum is open every day but Monday.

For a massive dose of art in downtown, head to the intersection of 5th and Hennepin Streets to take in Eduardo Kobra’s massive mural of musician Bob Dylan. This colorful masterpiece was completed in just five weeks, is five stories tall, and tells the story of the Minnesota native’s musical journey and career.

3. Learn About The City’s History

Start at Fort Snelling, at the confluence of the Minnesota and Mississippi Rivers, and learn why the spot was so important to the Native Americans who first settled there. You’ll also learn about the spot’s military significance and how the fort played a role in the emancipation of slaves. Admission costs $12; the fort is closed on Mondays.

To see how the Catholic Church helped shape the region, stop by the Basilica of Saint Mary, a Beaux-Arts masterpiece and the first basilica established in the United States.

The Mill City Museum, built on the ruins of what was once the world’s largest flour mill, gives visitors a glimpse of what life was like along the Mississippi River during the Industrial Revolution. Admission costs $12.

For the best overview of the history of the area, head to the Minnesota History Center. Admission costs $12.

No matter the time of year, there is always some sort of sporting event taking place in Minneapolis. That’s because the city is home to teams from all four of the major professional leagues: the National Football League (Vikings), the National Hockey League (Wild), the National Basketball Association (Timberwolves), and Major League Baseball (Twins). Minneapolis is also home to the Lynx, a Women’s National Basketball Association team, as well as a variety of collegiate teams based at the University of Minnesota.

Coming out to cheer on the home team — any of them — is a great way to get to know Minneapolis — on the field, on the court, or on ice!

5. Take In A Fair Or Festival

The citizens of Minneapolis take their parties seriously. There are fairs and festivals on nearly every occasion, and they take place all year round!

To check out the rising stars of the film world, get tickets to the Minneapolis St. Paul International Film Festival, a springtime tradition in the city.

The Uptown Art Fair, held each August, has been wowing crowds since 1964 with its wonderfully curated offerings.

For a more down-home experience — and more deep-fried food than you can eat — head to the Minnesota State Fair during Labor Day weekend. Discounted tickets start at $12.

Finally, if you’re in Minneapolis during the holiday season, Holidazzle is a not-to-be-missed outdoor festival featuring glittering lights, entertainment, and winter activities in Loring Park.

Minneapolis has long welcomed immigrants, and getting to know more about them is a great way to spend part of your vacation.

So many Somalis settled in Minneapolis after Somalia’s civil war that the city is now home to the largest number of Somalis in the U.S. The Somali Museum of Minnesota celebrates their art and traditions.

Thousands of Hmong also came to Minneapolis after ongoing strife and war in Laos. For a taste of their culture, go to Midtown Global Market.

For terrific groceries, food, and shopping, and to get a feel for the city’s vibrant Latino community, head to Mercado Central, a business district that features 35 shops and restaurants.

7. Pay Homage To The Purple One

Consider a pilgrimage to Paisley Park, the suburban Minneapolis estate where Prince composed, recorded, and performed his iconic music. After the musician’s death in 2016, his home was converted to a musical museum where fans could celebrate his legacy. There’s no doubt that Prince is one of the city’s most beloved sons; Minneapolis shaped him and his music, and in turn, he always remained close, choosing to make his music and home in the city. General admission to Paisley Park costs $38.50; VIP experiences start at $100.

The city has also put together a self-guided tour so that Prince fans can explore the spots that meant the most to the legendary artist. On the tour, you can see the places where Prince lived, performed, and shot the movie Purple Rain.

Be sure to get a selfie with the bronze statue that immortalizes the incomparable Mary Tyler Moore. She’s tossing her tam in the air, recreating the opening montage of the 1970s television show that bore her name and made her a star. You’ll find Mary Tyler Moore (who played a plucky associate producer at Minneapolis’s fictional WJM-TV) at the intersection of Nicollet and 7th Streets downtown.

There’s a great foodie scene here, much of it a result of the city’s melting pot of cultures. To sample some of the best restaurants and specialty markets, Twin Cities Food Tours is a terrific way to go. The group offers tours in several different sections of the city; tickets start at $52 per person.

Taste the city’s Scandinavian roots at the trendy The Bachelor Farmer, with its emphasis on locally harvested foods, or sink your teeth into the city’s iconic Juicy Lucy (a burger stuffed with cheese) at The Patty Wagon in south Minneapolis.

No meal in Minneapolis would be complete without a bar — not the tavern, but the dessert! Bars come in every flavor imaginable, from peanut butter to chocolate chip to lemon, and you can savor some of the best at Edwards Dessert Kitchen.

There’s no shortage of places to shop in Minneapolis. It is, after all, home to North America’s mall, the Mall of America. The spot is a one-stop shop, literally. Visit to eat, shop, and overall, be entertained. The mall features miniature golf, a movie multiplex, an aquarium, and even an escape room!

Minneapolis is also where Target is headquartered. A trip to the newly renovated flagship store downtown would be fun; it’s a great place to pick up essentials you might have forgotten to pack.

For high-end favorites, head to The Shops at West End in nearby Saint Louis Park. For a smaller, more boutique feel, head to MILLE or Statement to check out fashions and accessories from new designers and from those who have most certainly already arrived. And for a leisurely Saturday-morning stroll, head to Mill City Farmers Market for locally grown produce, yummy eats, and handmade goods and crafts. 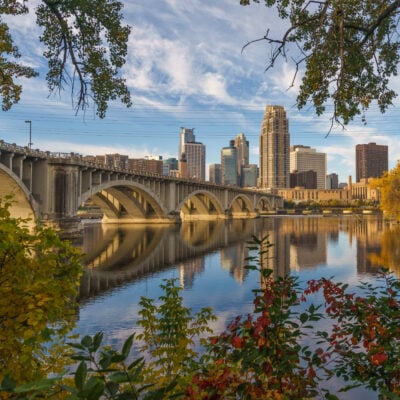 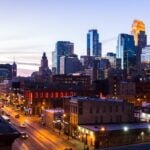 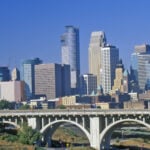 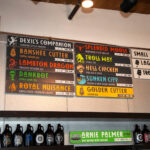