There are a variety of things to do in and around Branson, Missouri, but the Ozark city is best known for its shows. With over 100 live shows running each year, it’s easy to understand why millions of tourists visit Branson specifically for the entertainment. If you are heading to Branson, here are the key things to know about its live shows.

1. Branson Is The Live Entertainment Capital Of The World

Live shows have been the mainstay of entertainment in the Branson entertainment scene for decades. You’ll find many kinds of acts and music from every era performed by both rising and well-known musicians. You’ll hear pop, country, rock ’n’ roll, gospel, big band, swing, bluegrass, jazz, classical, and more.

Tribute shows are popular. Talented performers honor legends of the music industry by recreating their music in a way that makes you feel as if you are seeing and hearing the original. The Legends in Concert shows at Dick Clark’s American Bandstand Theater feature a different tribute act every three to four weeks with elaborate sets, special effects, and state-of-the-art lighting, laser, and sound systems.Of course, there is more than music to Branson shows. Comedians are also a Branson staple, either as headliners in their own shows or as acts in variety shows. Variety shows that combine singing and dancing with humor and storytelling thrive in Branson. Other shows will treat you to performances by acrobats, Broadway-style performers, and illusionists.

The dinner show at Dolly Parton’s Stampede features 32 horses and a buffalo stampede in a 35,000 square-foot arena. Various venues stage special Christmas shows in the month of December.

Everyone in the family can enjoy Branson shows. Comedy is clean. In keeping with the family-friendly theme, many performance venues do not serve alcohol.

In many shows, the family focus is also found on stage, where families provide the entertainment. The Baldknobbers and the Presleys feature multigenerational families performing together. The five Hughes brothers have been performing together for thirty years. Today, the brothers, their wives, and more than 35 children and grandchildren are in the show.

The five brothers and one sister in the Haygood family started performing at Silver Dollar City when the family moved to Branson in 1993. In 2001, they opened their show on the Branson Strip. SIX is a contemporary vocal band starring six brothers who made their television debut in 1978 on the Osmond Brothers Special. Three generations of Dutton musicians, singers, and dancers perform in Branson from April to December. From early December to early April, they take their show to Mesa, Arizona.

3. Many Venues Offer Discounts To Veterans and Military Personnel

In November, Branson hosts the largest Veterans Homecoming celebration in the United States. Other commemorative events occur throughout the year. Branson businesses are known to salute veterans and active duty personnel year round.

That commitment to honoring veterans continues on the stage. Many shows recognize veterans, active duty military, and their families through special patriotic tributes, with audiences responding with rousing ovations. Shows that don’t include a musical tributes typically make a special announcement at some point, often around the start or end of intermission.

4. Dozens Of Shows Include Gospel Numbers

Many Branson Shows celebrate both the flag and the Christian faith. Several, including Smoke on the Mountain, New South Gospel, and Ozarks Gospel center around gospel music and faith-based tunes. Many other shows, even those that are not overtly religious in nature or theme, will feature at least one gospel or faith-based number.

The 2,000-seat Sight and Sound theater has a 300-foot stage that surrounds the audience on three sides and uses state-of-the-art technology with a million watts of lights and sixty-thousand watts of sound to bring Bible stories to life.

5. Branson’s Original Show On The Strip Is Still Playing

Presleys’ Country Jubilee was the first show on what is now the Branson Strip. It got started back in 1967 and is still playing today, but it’s not the longest-running show in Branson. That honor goes to Baldknobbers, which dates to 1959. Another perennial favorite is the telling of Harold Bell Wright’s 1907 story The Shepherd of the Hills. The cast includes more than 90 actors, often local artists, plus real horses, donkeys, mules, and sheep. The performance staged in an outdoor amphitheater, includes gunfights and the burning of a cabin. Audience members are invited to join everyone on stage to square dance during intermission.

World-class violinist Shoji Tabuchi opened his own theater in 1990. The Shoji Tabuchi Show features Tabuchi accompanied in a variety show by his wife and daughter, a hand-picked band, and an amazing dance group. Plus, the theater is known for its million-dollar bathrooms, which are a tourist attraction in and of themselves. Many other shows, including most of the shows featuring generations of family performers, have long histories in Branson. Acts are updated each year to keep it fresh.

6. You Can Spend Your Morning Watching A Live Show

Live shows are available most times of the day, including morning, afternoon, and evening. Venues range from intimate 50-seat theaters to 3,000-seat auditoriums. You can even see a show on a riverboat. Aboard the Showboat Branson Belle as it cruises on Table Rock Lake, you can enjoy a three-course meal followed by a variety show of singing, dancing, and comedy.

The main show season in Branson runs from March to December, although a few shows still run in January and February. In addition to long-running hallmark shows, each year brings new shows and new touring performers to town. See Explore Branson for a list of shows and their schedules. The best place to buy tickets for a Branson show is on the theater’s website or by calling their box office.

7. It All Started With A Cave

Music and live shows were not what first attracted tourists to the Branson area. In the 1860s, geologists discovered Marvel Cave, formerly called Marble Cave because its limestone walls were once thought to be marble. Canadian mining expert William Henry Lynch purchased the cave and opened it for public tours in 1894. In 1950, Hugo and Mary Herschend assumed responsibility for the cave. In 1960, they opened Silver Dollar City, an 1880s-themed amusement park, atop the cave. By 1963, Silver Dollar City was Missouri’s top tourist attraction. Silver Dollar City is still run by the Herschend family. The theme park features rides and performers demonstrating traditional Ozark crafts. It also hosts musical and comedy shows, runs a summer concert series, and stages entertainment festivals and events throughout the year.

In 1898, minister Harold Bell Wright traveled from his home in Kansas to the Ozarks for health reasons and stayed at the homestead of John and Anna Ross. The Rosses became characters in Wright’s 1907 book The Shepherd of the Hills. The book sold millions of copies in several languages. A 1941 movie version starred John Wayne. The success of the book brought more visitors to Branson.

The tradition of live music shows in Branson started later, in 1959, when the Mabe brothers began performing twice a week in a converted roller skating rink. They named themselves the Baldknobbers after a vigilante group that played a prominent part in The Shepherd of the Hills.

In 1967, the Presley family built the first musical theater on Highway 76. Over the years, theaters were built to the east and the west of them. The Baldknobbers opened a theater on Highway 76 in 1969. Today, the over-three-mile section of Highway 76 known at the Branson Strip contains many theater venues as well as dozens of other attractions from novelty museums to theme park rides. It is also home to the 150-foot-tall Branson Ferris Wheel.

Roy Clark was the first big name in country music to have a theater–the Roy Clark Celebrity Theater, opened in 1983–linked to his name in Branson. It is now the Hughes Family Theater.

By 1991, Branson had 22 theaters and was receiving national attention. Today there are more than double that and shows for every type of tourist to enjoy.

Interested in learning more about Branson? Check out The Best Branson Shows To See In 2019, or 12 Fun Things You Never Knew About Branson, MO. 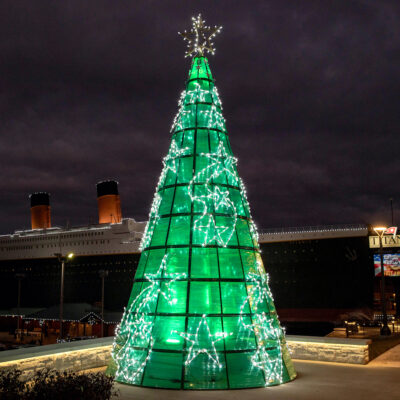 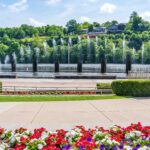 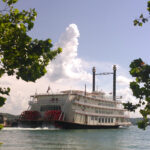 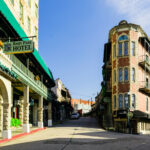