It’s no wonder wonder that San Diego is a Mecca of Tiki style. The city’s climate makes it the perfect place to enjoy a tropical cocktail. Plus, each August, Tiki Oasis, “the largest and longest-running festival for lovers of Island Lifestyle,” takes place over several days in the Crowne Plaza Hotel in Mission Valley.

In the 1920’s, bootleggers, Hollywood celebrities, and possibly a British aristocrat, were fond of heading south into Mexico where parties flowed with booze along the Ensenada Playa and in the clubs of Tijuana. Enterprising restauranteurs in San Diego soon opened illegal bars of their own, gambling they could turn a profit by stealing some of that clientele.

Here are the best bars in San Diego to connect with the city’s Tiki and speakeasy history. Bottoms up!

One enterprising Prohibition-era entrepreneur in San Diego’s North County was hotel and restaurant proprietor Eddie Kentner. He created a secret watering hole behind a chicken butcher room where, with the touch of a button, the butcher could notify the bartender to spin the shelves and clear the tables whenever the police showed up. The officers would find nothing but leaves in tins behind the bar and patrons innocuously sipping on tea.

Now, nearly 100 years later, the same speakeasy concrete bunker has been recreated by Chef Rob Ruiz, owner of the Land & Water Co. restaurant. Ruiz found the old bar in the basement of Land & Water while renovating, and has toiled long to recreate an authentic accurate gin-joint vibe, arranging the small space with low-key furniture and offering only cocktails — in keeping with the historical records.

There’s a dress code at The Charles Kenneth on the weekends too! (No ball caps, tank tops, shorts, or sandals.)

Those who long to tipple in the intimate space may gain entrance with a daily password that can be found on the website or Instagram account under, @thecaptaincharleskenneth. Lines to enter have been considerable for this 44-seat bar, but patrons dining at Land & Water get preferential treatment.

There are occasional Tiki nights — check Instagram for more.

The city’s largest and glitziest Tiki hang-out is set secretively in Little Italy. You’ll need a reservation to access the entrance hidden inside the restaurant, Craft and Commerce. Beyond a hidden door is a grown-up’s playground complete with a waterfall and torches. Classic tropical drinks and updates of older recipes at False Idol won’t disappoint.

South of Camp Pendleton and downtown Oceanside, the 101 Proof speakeasy opened in a repurposed bank building as part of Urge Gastropub. Set off historical Highway 101, you won’t find the bar easily. (But then, that’s part of the allure of a honky-tonk.)

Most enter outside from around the corner of the restaurant through a simple bank door. From inside the restaurant, the speakeasy entrance is through a bookcase. The prevailing recommendation is to eat in Urge and drink in 101 Proof. The décor is passable vintage lux with low light, a tin ceiling, padded banquets and small tables. But the bar is where the action is, and you’ll get the best attention from the staff. Who doesn’t love watching a bartender concoct an elaborate drink? The Tiki drinks are strong and spendy, classic cocktails less so. Enter on Tuesday for Tiki nights.

Downtown San Diego is peppered with cool speakeasies, but you have to know where to find them!

A smallish bar that you enter through the Blind Burro, the Cat Eye Club tries hard to live up to its Tiki hype. Focus on the drinks and the cute menu rather than the mash-up décor with Chinese lamps plus a few generic Hawaiian touches, and enjoy the live music on the weekends. There are several drink innovations like a variety of strengths when you order a Painkiller and a few party-sized bowls. Prices are more moderate than at the certifiably hipster Tiki dens in town.

This slim space sits behind a plain door painted with the name ‘Eddie O’Hare, Esquire’. Perhaps it’s a nod to the Al Capone lawyer from Chicago who was gunned down in his car, but no one’s saying. Prohibition is one of the few spots in downtown with jazz, and the band gets guests on their feet. The cocktail list rotates with the bartender’s whims but leans toward classics and trendy mixes. This spot isn’t as hard to find as it once was — look for the line and the bouncer.

With its entrance hidden behind a Poke Bar, the Grass Skirt pays homage to the Tiki Gods throughout its golden glowing interior. The impressive patio fireplace grins, there are comfy booths, and the bar is long and plentiful. It’s rarely packed on weeknights and prices are more reasonable than at downtown bars.

Just down the street from Prohibition, Noble Experiment is another drinking den that’s not much of a secret. Reservations have become a necessity but once you’re inside, you’ll appreciate the crowd-control. This is a small bar and keeping the space comfortable gives patrons a chance to check out the interior. Look up! The portraits change!

The bar entrance is through the restaurant ‘Neighborhood,’ and if you find a line near the bathroom, you’re close. (No spoilers here!) Inside, the bartenders are attentive to your preferences, but if you want to get with the theme, order the dealer’s choice as your ‘noble experiment,’ by listing what you’re looking to imbibe. Expect a pricey tab, but the environment is perfect for an impressive date night.

In the early twentieth century, developers were luring families to San Diego with elaborate tent cities. John Spreckels made movies about his vacation paradise on Coronado Island to advertise lots — and his famous Hotel del Coronado. In Mission Beach, JM Asher started a marketing campaign featuring a sexy lass on brochures about the area. Miss B., a clever metaphor for Mission Beach, was a fictitious bathing beauty used to sell lots! Today, her pinup curves decorate a mural in the tropical bar Miss B.s Coconut Club where flashy rum drinks rival her beauty. It’s a quintessential beach club too with huge slide up windows and patio seating just a block from the waves.

While not officially a speakeasy, the designers behind Vin de Syrah disguised the entrance to the subterranean bar behind a wall of foliage. Step in and it’s like falling down Alice’s rabbit hole, with vines, chandeliers, private couches, and a style inspired by vintage Paris as much as lounges in New York’s meat-packing district. Wines are featured of course, but there’s also a unique beer list and a selection of cocktails.

Whether you want to explore San Diego’s prohibition past, its Tiki present, or some combination, these recommendations won’t lead you astray. 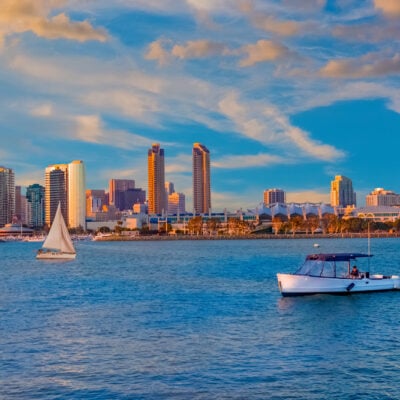 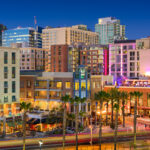 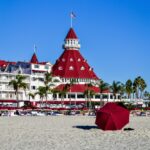